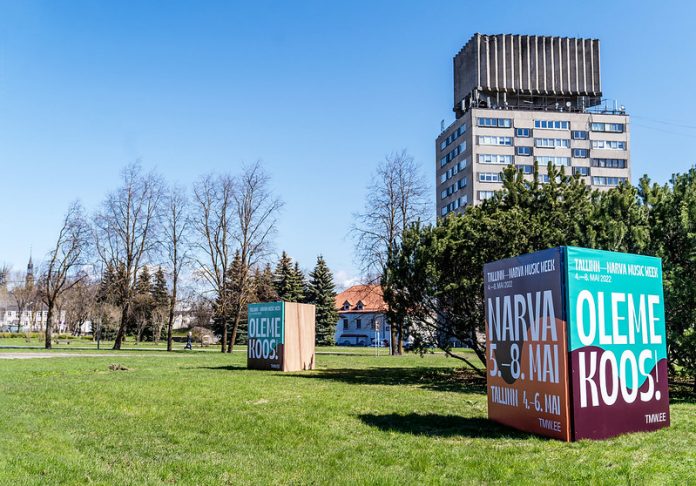 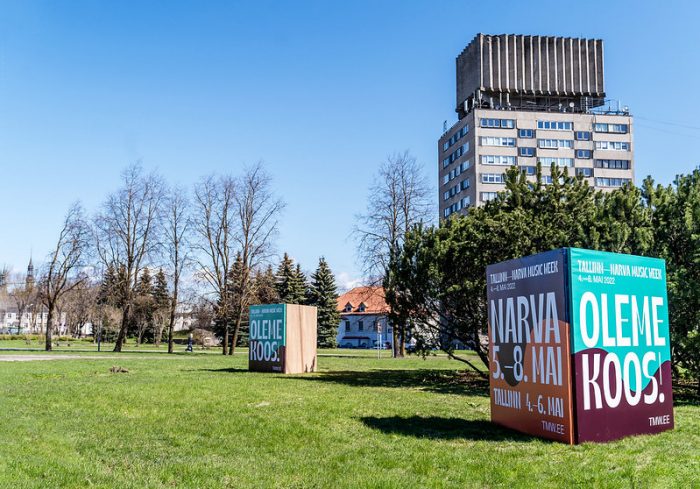 With two programmes in Tallinn and Narva, the new edition of the festival provides a bird’s-eye view of a better world.

The adventurous approach has become a habit for the team of Tallinn Music Week. After two successful hybrid editions during the pandemic, the Festival has had to be reshaped once again in light of the invasion of Ukraine. The second biggest number of artist applications in 2021 have come from Russia. Facing the challenge of getting bands to Estonia this year, the Festival has grown far beyond the boundaries of the former industrial and now gentrified area of Telliskivi, all the way to the Russian border. As they say, if the mountain will not come to Mohammed, Mohammed must go to the mountain.

Printed on branded festival bags, the slogan delivers a message that sceptics would call idealistic. Oleme Koos translates as “We Are Together”. Yet, music has an unbeatable power of resilience. No political circumstances and geographic obstacles can take it over entirely.

Running throughout the programme, the topical theme resonates with hearts and minds irrespective of their origin. Sounds and Stories from Ruhnu Island, a project by songwriter Kairi Leivo and fiddlers Karoliina Kreintaal, Lee Taul and Sänni Noormets, offers a glimpse into the story of the scarcely-populated land in the Baltic sea. Exploring “creative connections between the past and the present”, the collective play traditional music of the island, which for a long time was taken hostage by powerful kingdoms and empires – Sweden, Russia, and Germany. Although now associated with Estonia, the island boasts of music that hints at Runo songs, harmonies of Irish sean-nós singing and undulating melancholy of klezmer. Indeed, folk doesn’t have an origin other than the collective human psyche. 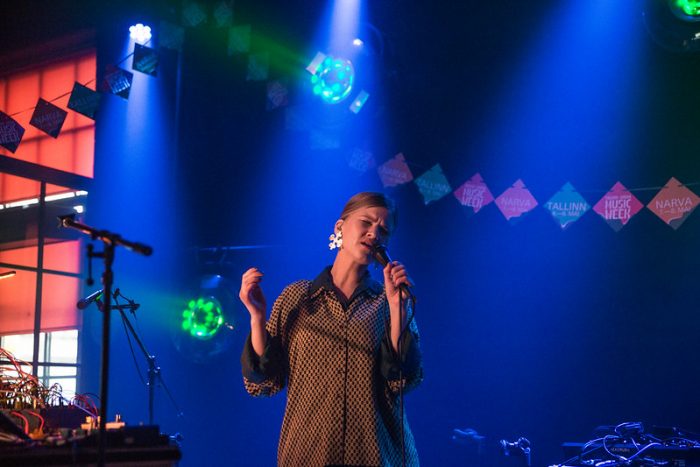 Placing folk and one’s own identity in a new context broadens horizons. At the premises of F-Hoone, the cultural hub of Telliskivi, Maarja Nuut captivates the audience with the murmur and bubbling of modular synthesisers, serotonin-boosting vocal harmonies and an alluring presence. Although pondering her roots in the recent album Hinged, Nuut is a keen explorer, pushing beyond the conventional framework of nation, folk, tradition and whatnot.

In a similar vein, the pioneers of indie rock in Estonia Röövel Ööbik cannot simply be put in a box. Having emerged in the late ’80s, they were the first band from the former USSR to record a John Peel Session in Maida Vale studios. Reunited for the Tallinn Music Week show, the band is pretty much in their own space despite the frontman Tõnu Pedaru’s cues and abrupt exchange with the audience. Although they originate from Estonia, musically they exist in multiple places and periods, from San Francisco in the late ’60s to Manchester in the early ’80s.

From Ljubljana, Lelee play a melody-led post-punk that brings to mind pivotal artists of the first indie labels Fast Product and Postcard Records. Singing in Slovenian, they yet relate to the foreign audience. 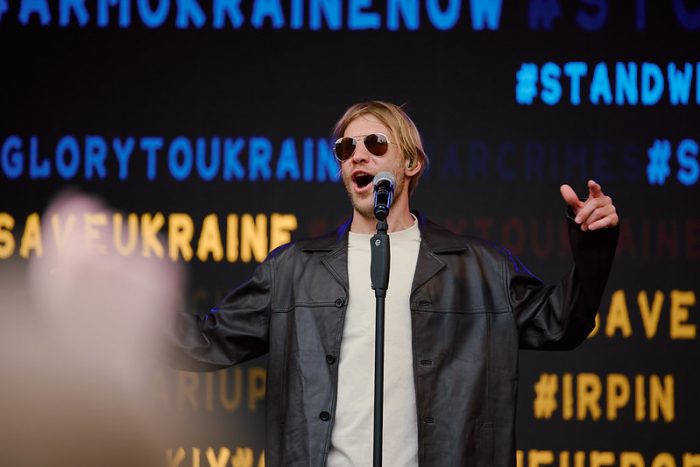 With their national identity in limelight, Ukrainian artists speak of values that are important for all human beings regardless of their citizenship. Russian-born and Ukraine-based artist Ivan Dorn performs outdoor in Telliskivi in front of a mixed audience consisting of music industry professionals, families and excited teenagers. Some of the latter are fans who wait patiently at the door of the nearest venue where Ivan gives interviews shortly after the show. Talking to Estonian Public Broadcasting TV news, Ivan comments on the necessity of creative resistance in the current geopolitical situation: “They expect us to sink into our anxiety, sadness, and grief, but we won’t give in.”

Although metaphorically eliminating boundaries, this year’s edition keeps on bestowing the charms of local music. At Tartu 2024 Culture capital and Ö Studio showcase, producer Martin Kikas and kannel (Estonian version of the zither)-player Mari Kalkun create a sonic canvas of Tartu, the second-largest city in the country. Extracting various sounds such as dogs barking, hissing, and railroad noise, the musicians embed them into the emotive language of Mari Kalkun’s songs. The next day after this experimental performance at Tallinn’s Uus Laine, the artist plays solo in Narva’s Vaba Lava, delivering her message of peace with her recent composition Somewhere There’s War. Despite a slightly more formal feel at the venue, kannel strums dissolve formalities, leaving space for an expression of the heart. 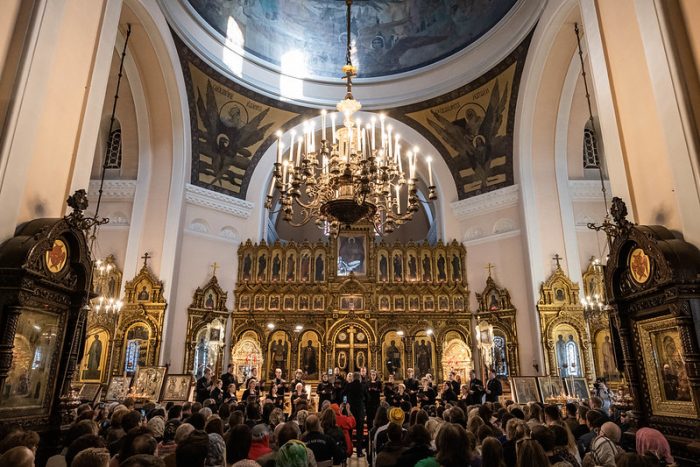 Located only metres away from the Russian border, Narva is a strange combination of formality and chaotic disobedience. This is conveyed in various forms, from architectural eclecticism, incorporating Soviet brutalist buildings and the medieval Narva Castle, to the inability of local taxi services to function properly faced with this international event. The festival venues seem to be scattered all around the city, varying from the dilapidated and majestic Kreenholm factory to the orthodox cathedral of the Resurrection of Christ. Figuring out the way to a destination takes time.

Yet, each quest is rewarding. In the ornate interior of the orthodox church, Arvo Pärt’s music stirs energy. Delivered by voices of the Estonian Philharmonic Chamber Choir, it performs magic, transfixing one with the power of polyphony. The ringing quality of these compositions resonates through the space interspersed with the gossamer of sunlight.

Entitled Da Pacem Domine, the concert comprises spiritual pieces with the title composition that Pärt created in response to the bomb attack in Madrid in March 2004. Calling for peace then, it is fittingly in place now. The message reaches out to the audience. 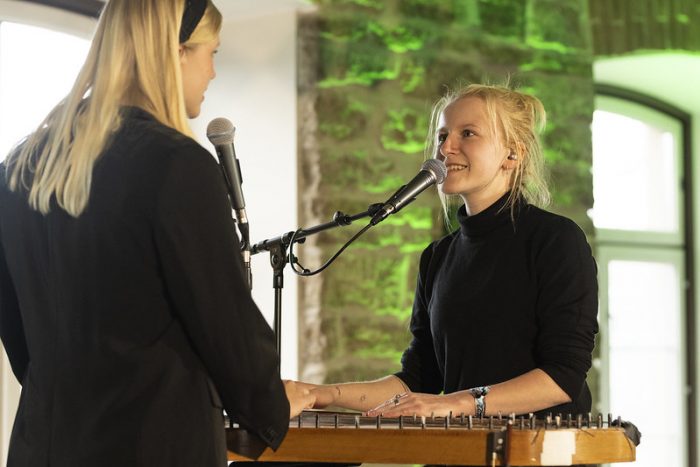 With the Kreenholm area split into several venues, the smaller one is Narva Gate Kontor, showcasing Estonian folk artists. One of them are Duu Ruut, which translates as Duo Square. The name says it all. Geometrically resembling a square, the performers face each other while playing the kannel, placed between them. The duo consists of Ann-Lisett Rebane and Katariina Kivi whose interpretation of traditional Estonian music is closer to indie-folk rather than folk at its embryo. They adventurously explore the potential of the instrument, producing beats by thumb-tapping on the amplified part of the kannel’s body as well as playing with a drumstick and bow. 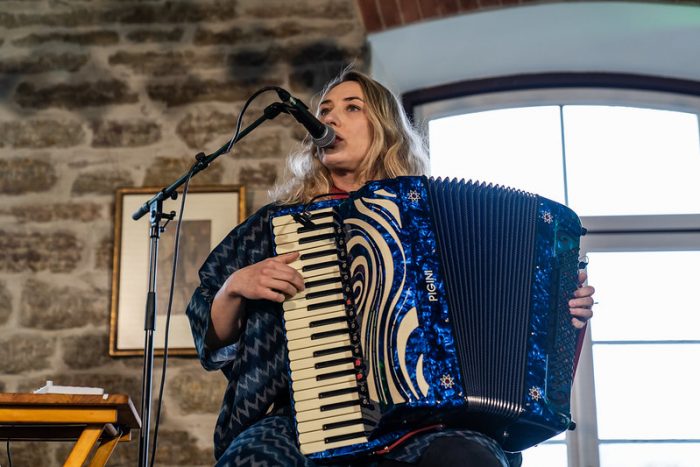 Indeed, one instrument has enormous potential. This potential can be disclosed by an artist with a similarly convincing determination and talent. Accordion player Tuulikki Bartosik delivers tunes so effortlessly, as if the instrument forms part of her physical being. Her compositions are flowing instrumental pieces, gently framed with pedal-board effects. One of them is In Luce Amor/Eternal Love. Consisting of a few parts, it conjures up a steady growth of a sprout in an environment that is not always friendly.

With the Russian border running down the Narva river, the Festival delivers the message clearly. It is not a gauntlet but a hand offered to the one who struggles to ford the river. The song Broad River by Saint Etienne comes to mind. The ebb and flow of history can be elevated to the next level through compassion. There is hope.

More information about Tallinn-Narva Music Week is on the official website of the festival.