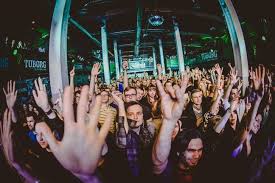 Tallinn Music Week is an ambitious and stunning music event in Estonia with a great diverse line up of music. LTW boss and Membranes frontman John Robb tries to keep up…

This is quite  a stunning event.

Within one year Tallinn Music Week has gone form being a fast rising music festival run with a determination and imagination into a huge sprawling multi cultural event that somehow manages to encompass music, film, politics, food, drink and special events all over a the capital city of Estonia that has a population of under half a million.

A diverse and imaginative range of venues all over the city are utilised from restored factories to several hundred year old cellars to a maritime museum – I’ve been to many gigs in my time but few with a full size submarine above my head while a Russian DJ plays dark and heavy electronic music.

There are political debates about Africa, poverty and immigration and how music should get it head out of the sand and try and deal with the real world and engage again. The level of speakers is high as they tackle sexual discrimination and immigration and is started by a  speech from Estonian president Toomas Hendrik Ilves who used to go to CBGBs in his American youth and has impeccable New York mid seventies proto punk music taste – he also DJ’s later on with a great set.

The whole event has been put together by the amazing Helen Sildna, a woman whose intelligence and drive has created a music event that has outstripped its roots and makes it one of Europe’s most intriguing cultural events. This is an event where your mind is stretched and the music is diverse and thrilling as well and connections are made across many different disciplines. These music events are all over the world now and a new model was needed to replace to bunch of panels and some bands routine – something ambitious – something connected to the rest of the planet and TMW has delivered it.

Somehow they have managed to cerate a multi dissipline event that has placed music at its centre. The pinnacle is perhaps the brilliant Estonian performer Maarja Nuut (read the review here).

The whole 4 day shebang kicks off with an orchestra which is improvising! the whole of notion of somehow getting 50 musicians, who are used to playing tightly disciplined music, to somehow improvise and bounce around from classical to gypsy music is quite mind blowing but in the hands of charismatic conductor Kristjan Jarvi is looks easy. The energised, mesmerising conductor works the stage like a classical sweatshod and wild eyed Mick Jagger is powerful enough to watch on its own and his genius is to somehow make this highly ambitious project work. They even find the space to incorporate breakbeats from DJ Mr. Switch in to the noise collage soundscapes.

I Wear Experiment are three piece from Estonia whose powerful electro has an added depth with its soundtrack soundscapes and unexpected twists of experimentalism. They also bring an energy and inventiveness to their muse that sees them get a great reaction.

Finland’s K-X-P deliver a set of pounding almost tribal electronic power with the twin drummers adding to the rhythm rumble – it’s kinda like Killing Joke jamming with Hawkwind but with a 21st Century electronic power. They describe themselves as ‘Electronic- Motorhead-Space-Trance-Spiritual-Rock-Meditation-FreeJazz-Godz.’ and its not far of the mark. This is the kind of music that pulls you into it black hole of throbbing darkness and is highly effective. In their monk like hoods and incense infernal riffing they create an aura of high decibel mystery but also a space ritual power in their long and hypnotic songs.

Liima are a Danish hipster band who play endearingly eccentric modern pop with all its quirk overload and high IQ bass driven intelligence whilst Kriget are Swedish trio who create another dark soundscape throb with their bass drums and sax line up. This is stunning and powerful stuff and a brooding darkness fills the room but it is inclusive and you enter their fractured world of free jazz electronic that is part psychedelic and part dancefloor violence. There are eastern scales and there are pentatonic boogies – all played out in front of a screen of great visuals that helps create the dread atmosphere that has elements of electronic and elements of Godspeed and elements of post punk dark-lords. I’m not sure if they played one of their signature tunes – the amusingly entitled ‘Aghori Diet’ (which is human flesh fact fans) but it feels like they did.

The last night is a blur of great musicians from Africa and the Mahgreb, Tuetoic beats but the stand out is Batida who is on fire.

Batida is not a group, it is Pedro Coquenao. Batida is his stage name or alter ego if you prefer – a radio, video and music producer born in Huambo, Angola and raised in the suburbs of Lisbon, is throwing a party with some really heavy duty, heavy manners party content.

What Pedro takes to each stage are elements (beats, bass, vocals, percussions, dances and video) represented by artists that he admires.Started in 2007 as Pedro’s Radio Show, Batida is not a band but on stage is a rolling line up of various people and players, mixing electronica with samples from the 60s and 70s Angolan music and playing it live tonight with a full line up that included a great rhythm section and two women singer/dancers who add a genuine vibrancy and texture to the overall sound with a selection of masks and dancing.

Batida perform in a large converted warehouse on the edge of the Tallinn city Centre that is yet again packed and leaves you wondering just how many people live in this small country with the overwhelming support they give to the diverse spread of music on offer.

Batida, in many ways, sum up the spirit of Tallinn Music Week which is fast becoming the best event of its kind in Europe and the new leader in ideas, innovation and action in this future now kind of conference thinking. The gig is delivered with a brilliant imagination and intelligence and the flux between trad Angola and modern electronic music and the direct communication of hip hop is a great fusion that cranks the past into the future without either discipline losing its edge. The huge converted warehouse venue is totally packed with Estonian youth – some of the most enthusiastic audiences you will get to see – who seem to have the ability to embrace classical music at one moment and Batida’s potent brew of hip hop, shimmering Angolan music, fractured beats and deep dub bass into a new music all of his own.

Batida turn the room into a huge party with songs of humanity and defiance and put paid to that boring notion thrown around by older people that music has no political and social content any more. There is one astonishing section in the middle when Pedro Coquenão stands on the stage on his own and tells the audience about the political situation in Angola and the suppression of thought and ideas to a silenced house – to break up a party like they have been delivering to make this kind of impassioned speech is both bold and thrilling and reminds you instantly of the power of music to both entertain and deliver a message of hope and defiant anger at the hateful fools who try and crush the human spirit.

It also helps if you have a set of songs like this. These are delightful and throbbing pieces of 21st Africa plus Europe flavored music. Crossing the continental bridge and joining the continents, this is not the museum piece of the African music we have loved for decades but an embracing of the technology of the now and the cross pollination of musical styles and the fusion of ideas that have always made music great. Batida to do all this and create a party atmosphere with perfect dance beats of electronic music fused with traditional home country breaks that remind me of Angola’s electronic Kuduro music and the sense of space and adventure of dub.

Batida know how to put on a show, Pedro Coquenão, is a charismatic presence and flanked by the two woman singer/dancers who deliver vocal parts and shimmy and dance across the stage sometimes twirling umbrellas or throwing plastic whistles into the crowd to blow on one song create a joyful yet agit pop celebration. One song is built around a looped sample of the bass line from the Clash’s Radio Clash – you can see Joe Strummer smiling now – God bless his rebel soul – he would have been in love with Pedro and his ever evolving collection of performers who combine the multi ethnic, melting pot of musical ideas and causes that were so dear to his heart in a mesmerizing musical whole perfeclty reflecing Tallin Music Week and it’s criss criss crossing of creativity and ideas and politics and the rest of the wrold perfectly.