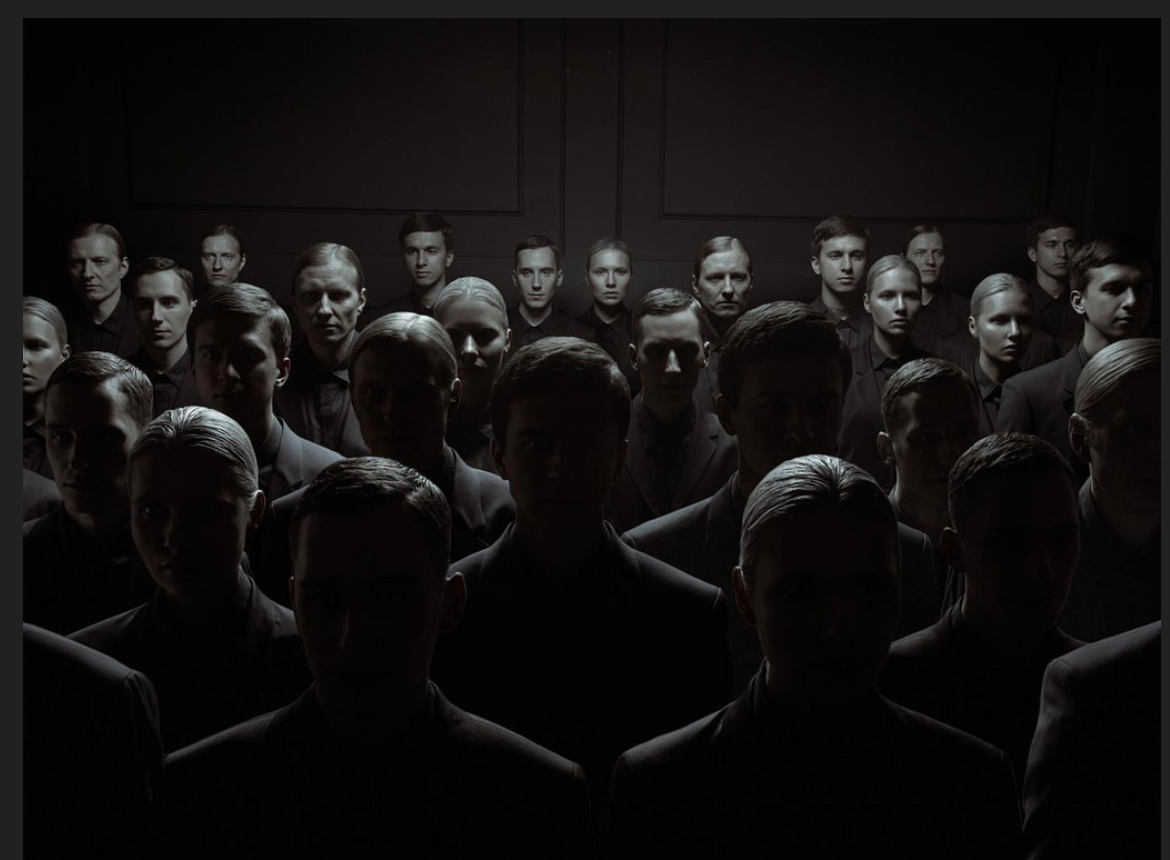 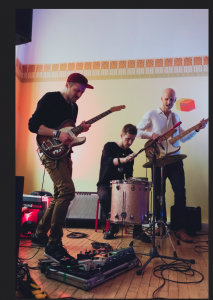 Saturday
(Richard) Sleep? Pah. It’s Tallinn Music Week and there’s too much to do, whether it’s catching inspiring talks, checking the City Stage or the pop up shops and food, or just mucking about. I groove around some record shops and get told to get back for the Erki Pärnoja City Stage gig at 5pm. Cool, being tipped off by locals is always rewarding. I hook up with Maarja Nuut (who’s also curious) and we check it out. The record shop (next to a torture museum, the proprietors of which pretty unhappy with the press of people blocking their entrance), is now heaving. There is a good reason for such a crowd, mind, as the band are ace. Fans of Felt guitarist Maurice Deebank should check out the mercurial guitar lines that ripple across the surface of Pärnoja’s sound. The band have got something of Jaakko Kalevi’s muse, too. Trippy and blessed with a light hand on the tiller, it’s great pop.

(John Robb) The night starts with a stunning choir – Tütarlastekoor Ellerhein who are 50 woman with beautiful voices that song from the heavens creating a swirling mist filled mystical atmosphere. You can hear a pin drop between the parts as the audience is hypnotised into silence. Estonia has a strong tradition of choirs – more choirs per capita than any other country in the world and it seems like everyone you meet seems to sing in one!

(Richard) Later we go to the charming, ramshackle club, Kultuuriklubi Kelm and catch the very young Estonian pop band Around the Sun, who have some very pleasing, refreshing numbers (and a good guitarist to boot). Everyone in the place is a parent, or about 16 and frighteningly good looking. I would have hated to be a teenager here. After that we watch ili-ili who are okay, but not as interesting as they sounded on record. Sadly, they are initially catchy but don’t really take their sound anywhere. At this point I am grabbed by a very enthusiastic Belarusian promoter name of Dmitri and – with his Belarusian colleague and a nice Lithuanian lad in tow – we embark on what can only be described as an outdoor drinkathon catching every Russian band or monument going whilst discussing the merits (or otherwise) of contemporary Russian, Belarusian and Lithuanian music. And Brexit (Jesus Harry Christ, we Brits will never escape this topic for years, I promise). First stop is the wonderful Vene theatre, which looks like it’s a setting for a 50’s spy thriller. All the Russian civic buildings we’ve been in in Tallinn share this imposing, neo-classical grandiosity. Here, we catch the wonderfully named Shaman Jungle, which is a fair description of their sound. Imagine a band playing a straight mix of Collapsing-era Amon Düül and Hapshash and the Coloured Coat (resoundingly obvious chord changes and all), albeit looking like they’ve wandered out of the C17th. I understand why they dress like this, it’s tradition, and Belarus is nothing if not a country that likes to promote traditional, Belarusian values. Dmitri is at pains to point this out. The band also need to sort out their set and sound dynamics, but there is something in this hippy swirl that could be really special. After that we get whisked off to another remarkable setting, Kino Sŏprus, which Dmitri wants us to see, purely because of the building itself. It’s an old cinema in the traditional Soviet socialist-classical style (pillars and huge ceilings and painted gold and cream and pale green with more gold on top). It also boasts a marvellous 1960s bar at the back of the auditorium, where Dmitri plies us with more drink. I don’t really take in the gig by Astrid Swan, which does sound great.

(Richard) Back to Kultuuriklubi Kelm in time to watch пасош grind out a set of very enjoyable punk pop, before getting in place for Žen from Croatia, who were great at MENT festival . And what do you know they are great again. In fact they are better; their softer, melodic side coming to the fore. They are a proper, proper alternative rock band, there’s no gauche, or contrived side to them and everything’s channelled into their music. The sound (for those who are curious) is a blistering mix of Felt, Stereolab, and Spacemen 3 all wrapped up in a groovy, empathic, glowing whole. And backed by some stunning visuals. It’s a truly brilliant gig. We get tracks off their last beautiful LP, Jantar  and a new aggressive and inspiring rock-out (written specially for the festival) too. The crowd are lost in this brilliant sound and don’t want them to go.

(John Robb) We are now in this amazing looking theatre. A grand looking building full of ghosts and ancient song. The ceiling is painted like Sistine chapel and the room is full of atmosphere. it’s another stop on one of those wonderful endless nights of great music that switches dramatically from one style to another at the Tallinn Music Week.

It’s the perfect setting for Sirri Sisask who is sat down at her grand piano playing this remarkable music that is full of beauty and passion. Hanging piano chords fill the air, dark chord changes switch from major to minor keys and a pandoras box full of emotional raw power flutter across the room.

The rolling piano lines hint at classical and even jazz flavours but are resolutely dark and melancholically powerful as her voice soars and your heart goes with it. This is an emotional music that seethes like nature and the sea, full of dark dramatic beauty and power. The closest I can think of Diamanda Galas and her brooding brilliance or another remote pointer would be Nick Cave and his melancholic ballads – but those are just signposts as this is a totally original music of its own.

Of course a music as emotive and thrilling as this doesn’t just come from anywhere. Siiri Sisask grew up in the mysterious Estonian countryside and spent hours on her own in the mystical deep forest before diving into the early Estonian punk scene, she was a rebel with a cause and then swerved off into a remarkable life where she has travelled to Mongolian to study with the Mongolian throat singers, has songs that are influenced by Buryat and Buddhist ideas and swam into the deep dark lakes of ideas and influence. She has been an actress, a musician but has followed her own distinctive creative path to create this sonorous and brilliantly dark music.

Every piano note chimes with a deep internal longing and her remarkable voice  is full of dark matter and power – a voice that takes full advantage of that throat singing and is tinged with the drama and passion of opera or the raw emotion of the blues. Siiri Sisask is a unique, powerful and spellbinding performer and this was an hour of being lost in the deepest and most mystical forest of sound and spectral shapeshifting emotional skree.

(Richard) What now? Imagine a band picking up Ludus’s baton and giving it a whole new, interesting twist. Let me tell you Russia’s Glintshake is that band. The singer literally bounces on, full of brio and verve as if she’s the entertainments manager on a North Sea ferry. She has an incredibly expressive face, too; but her gurns, smiles, fake frowns and strident calls to order just add to rock’s canon and never seem contrived. The playing is astonishing from the whole band; incredibly assured, sharp as a pin and full of long winding tracks with incredible drops and refrains, sometimes in 7 / 4 time, that hold everyone’s attention throughout. Sometimes things drop into sharp, Barrett-esque interludes that sound like lost passages of Interstellar Overdrive. This band are incredible. You have been warned.
Then it’s up the stairs to the weird upstairs bar turned into a gig space for The Homesick, from little old Dokkum up in that there Netherlands. The signs are promising. Singer Elias struts around this weird old room like he’s just watched his team win 6-0 away. Jaap is wearing a polo shirt with the Estonian lions on them. The band’s confidence seems sky high, and they launch into a set that literally tears up the psychic space. The opener Half Aryan chugs through the room like a tractor, (albeit painted like John Lennon’s Rolls Royce) ploughing up everything in its path. The next song, the brilliant weird-pop shuffle of Gucci Gucci, applies the coup de grâce on an audience that is already shaken to the core. Two songs in and there is wild dancing too. From an audience that surely can’t know much about them. Apparently Estonians are reserved, but there’s a gaggle of teens going nuts here. The sound is sharp, and groovy as hell, and ringingly loud, the tremendous, glorious racket bouncing off the roof. The slowies (Boniface and Near the Water) are outstanding too; tough and sinister and adding a much needed hinterland to the gig which, up to that point, was in danger of leaving everyone exhausted through too much fun. But there’s more; Eater of Meat, with its chugging rhythm and beautiful switch amidships is stretched out and hammered into a track of anthemic qualities. And last up we get The Best Part of Being Young Is Falling In Love With Jesus which is a suitably rousing finale. The place goes nuts and everyone’s jigging about. They’ve only been in the country 6 hours. Jesus this band are great. Recently an article in a Dutch magazine said alternative guitar music was dead. Which, on this evidence, is total, risible, poppycock.

(Richard) Afterwards we party on to a duo in Kuku Klubi that sound like Erasure, but have songs about execution (or so we are told). The afterparty’s in a tunnel near the station, and most people techno-techno on till way past breakfast. What a festival. After the flight home, the withdrawal is a long, protracted one, as my headspace shrinks back to earthbound proportions.