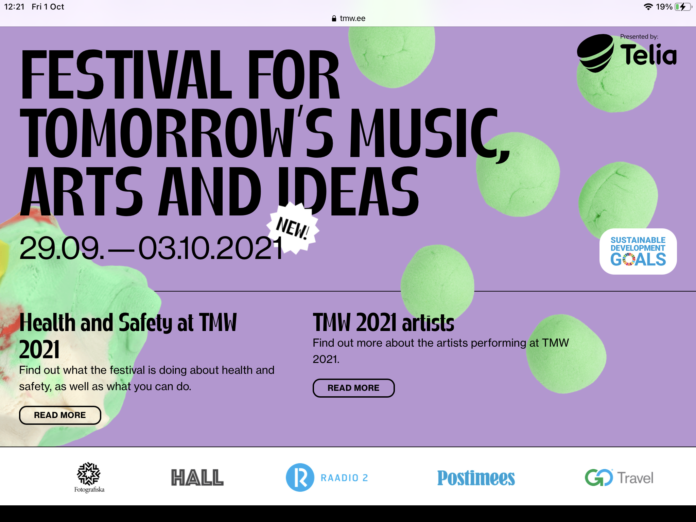 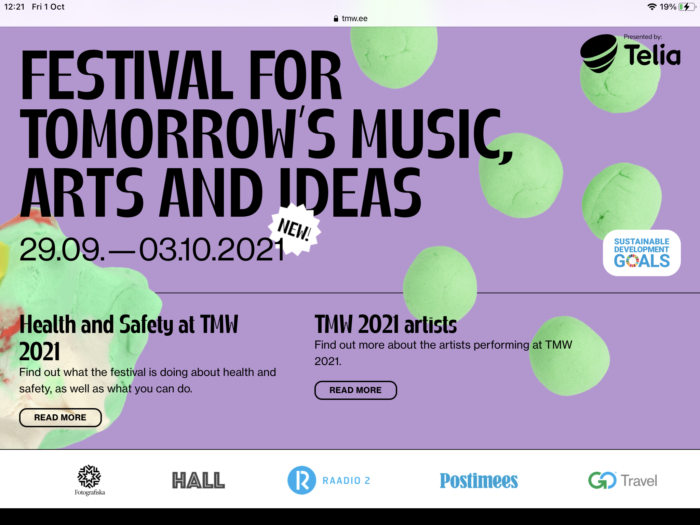 Tallinn Music week have earned their reputation over the years as the most cutting edge of European music events. With its combination of panels, talks and music of all shades and styles it’s a barometer of the now. A musical and cultural freeze frame of the moment. The conference based model itself has moved quickly over the years from the late eighties to become the key frontline of music culture where you get to glimpse the future in various European city centres and the front runner is always Tallinn Music Week.

They have stretched the fabric of what these events can be and what they can do and whilst still embracing the core of being a place where music business gets done and networks get netted and worked they forge ahead in their own cultural certainty. It helps that Tallinn is a beautiful backdrop city with its winding medieval streets surrounded by thrusting modernity hugging the edge of the Baltic but with a fast forward modern techie vision. People here are young and are already in a future and the event reflects this embracing of the 21st century.

The opening night is always something special and tonight we are set up for adventure by a stunning brilliant speech from the Estonian president, Kersti Kaljulaid who delivers an embracing optimistic post pandemic vision that places culture art and music at the core of this vision…a vision from a Liberal Conservative politician that we would never hear from Boris Johnson – our Prime Minster Oaf. She speaks in Estonian as she should and the translations are beamed on the walls of the converted factory walls. It’s simple, it’s hi tech and it communicates – all key pillars of Tallinn Music Week and its visionary and wonderful driving force Helen Sildna.

There are many stands of music at this year’s event that we will of course pick up on in the next few days but in the cavernous hall tonight we have two premieres and an adventure in modern classical and also electronic – two forms of music that fill the same roles whilst being centuries apart. First on is a piece written by Young Estonian composer Liisa Hõbepappel written specially for the festival, and performed by the group Trio ‘95.

The cello player, violinist and pianist deliver a spellbinding set of strange time signatures and scratching, scraping sounds that create a unique and hypnotic atmosphere. The hanging on a cliff edge by your finger nail timings have the thrill of free jazz and give the feeling that this atmospheric music could collapse at any moment and yet structurally stands firm. It feels like these dynamics are somehow a narrative for these times when the pandemic and every other crisis thrown at us makes civilisation itself teeter on collapse but human ingenuity and creativity pulls us back from the brink.

The stage is cleared of the classical instruments and the complex wires and boxes of electronica are constructed as the night closes with a special piece of music commissioned for the event called Themes For Great Cities.. The mesmerising piece is created by four idiosyncratic musicians who paint soundscapes with electronic drones, found sounds from the streets of Tallinn from seagulls to waves to traffic to the aural city scuzz into and a musique concrete that pulls you into its dark interior.

Estonians Jonas Kaarnamets and Erki Parnoja from Ebert and Two Dragons are joined Dane, Jonas Bjerre who we know from playing in Mew, and American musician and cultural historian and member of TRIPLE X SNAXXX, Alex Maiolo as they combine their international forces in a cross border electronic narrative that is moving and enthralling with its atmospheres and textures and visuals creating world where dystopia and utopia wrestle for the future with a killer soundtrack. This premiere is mind-blowing and lets hope that their goal of taking it to other urban centres and perhaps involving other artists comes off.

It’s a fascinating affair. The stoic performers hover in the shadows manipulating the spaghetti of wires and keyboards and mysterious boxes on the stage spewing out the dark sound.

The digital equipment creates overlapping pulses and a pulsating beauty like a sci fi futuristic orchestra and creates the same moods (same moogs???) as the more string driven classical forms. These are Dark Matter electronics and sombre soundscapes that slowly build and envelop with an aching beauty and  melancholy that suits the occasion perfectly.

The human in the machine, this is a digi-beauty in a broken world to immerse in and one can only hope that is not a one off but a serious bid to take out on the road and create a soundsphere for these times and for future concerts…