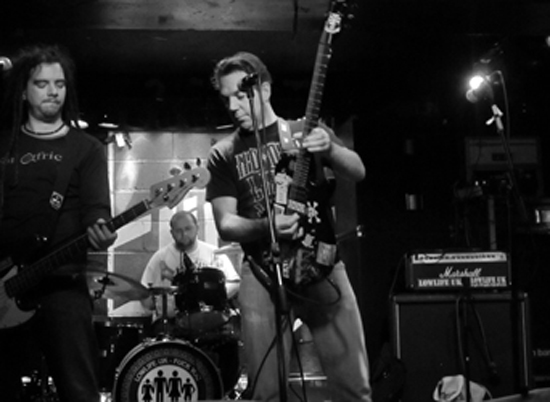 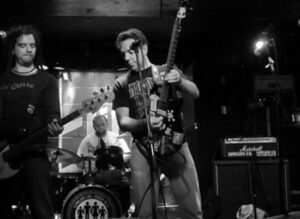 Louder Than War: First and foremost, you class yourself as a punk band, seemingly drawing a lot of influence from the 70s and 80s era. Which bands most inspired you?

Hooligan Dublin: The bands who inspired me were the Sex Pistols and The Clash and the original crop of 76/77 punk bands. Another important band was the Ruts; and I also liked the bands who formed the second wave of punk such as: the UK Subs, the Angelic Upstarts, Discharge, Blitz, The Exploited, Crass and some of the other bands on the Secret, No Future and Crass labels. Later on I got into different forms of music from folk and blues, through to the rootsier end of American country.

As an alternative subculture band why do you feel like you identify most with punk rock?

In the main, there is a certain ethos in place where people will help each other out. This could take the form of another band lending you a piece of equipment or simply a promoter putting you up for the night. As a band, most of us grew up listening to punk, and I suppose it shapes your view of the world to a certain extent and that’s why we identify with it. The music can be good, too!

Your single No Blacks, No Irish, No Dogs’ has a strong anti-fascist theme. Do you plan to incorporate this into more of your songs in the near future?

I think the sentiment expressed in ‘No Blacks, No Irish, No Dogs has as much relevance today as it did in 50s and 60s Britain. Discrimination against persons on grounds of their race, nationality or colour hasn’t gone away. There are no songs with an anti-fascist theme currently in the pipeline, but we would like to incorporate the theme into more songs in the future. At the moment I am reading about James Gralton, an early Irish Communist who was deported from Ireland to New York because of his political beliefs back in 1933. Ken Loach just made a movie about him and he just might turn up in a future Hooligan song!

Speaking of anti-fascism, how essential do you feel it is to the punk movement? Many grey zone bands have often said politics don’t belong in punk – what do you feel about this?/strong>

I feel that anti-fascism is integral to the punk movement. The Clash and The Ruts were both active in promoting anti-racist causes; and in today’s punk scene, bands like the Angelic Upstarts have a firm anti-fascist stance. It’s not at all convincing to say that politics don’t belong in punk; and one of punk’s greatest strengths is that it can address political issues in a powerful and meaningful way. Take, for example, the Clash song Straight To Hell, which deals with the US refusal to recognise mixed race children fathered by American GI’s during the Vietnam war (“Let me tell you about you’re blood, Bamboo kid – it ain’t Coca Cola – it’s rice”).

There’s plenty of pictures knocking about of you guys having drinks with fellow musicians/fans/promoters after your gigs (I’ve even had the pleasure of sharing a few pints with you myself!) Do you have a favourite tipple?

My favourite tipple is a pint of lager; and on tour I like to try out the local/national beers. We’re just back from a short tour of Belgium and Germany with the Welsh band Foreign Legion. I like the Belgian beers: Leffe, Duvel, Maes and Jupiler; and in Germany the Weisse beer always goes down well. Big shout out to Vincent and Kenny (Hooligan, Belgium), Patrick Claes of PCL Productions and JP Kinneide for arranging the gigs!

Lastly, any plans for a full length LP anytime soon?

No plans at the minute, but there is a brand new EP on Oi! The Boat records due early next month. It was recorded in Newcastle, England, and features some of the North-East’s finest punk rock musicians: Decca Wade and Nicky Buck on drums; Tony Van Frater on bass/guitar; and Mond Cowie, together with Decca in the producers chair (it got quite crowded in there!) We had a lot of fun making this record and we think the result sounds class!

Hooligan’s music can be found here. The band is also on Facebook here.