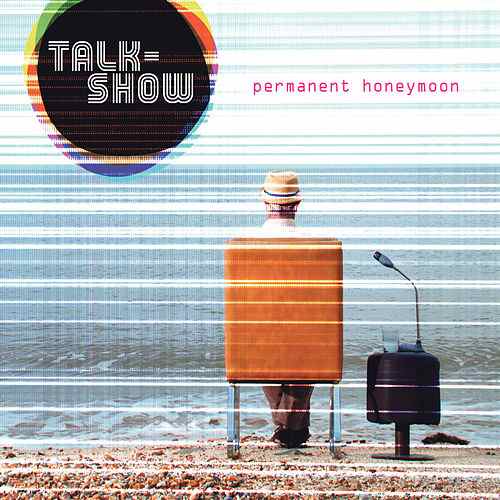 How does this sound? “The sound of tomorrow and yesterday” The word is that Talk Show blend McCartney, Kraftwerk and The Velvet Underground into a new pop. Sounds intriguing.

It’s a pretty impressive cocktail if they can live up to the billing. The chances are possibly enhanced by the fact that the demos found their way to master songwriter Boo Hewerdine who took on the production role  on what he calls “bittersweet vignettes of love gone wrong, right and everything inbetween.” A compliment to Talk Show main man Lawrence O’Shea whose 2015 EP All Messed Up (And Nowhere To Go) proved a water testing success, although two momentum sapping years have since passed in the meantime.

Permanent Honeymoon is one of those albums that some may moan at clocking in at just half an hour, although there’s always the counter of the quality over quantity argument with the good old days of vinyl values at large.

Lyrically, there are teenage crushes, middle age, fatherhood and wartime balladeering, Molly Ringwald leading the charge with a chugging bounce and attractive little keyboard run adding to odd bursts of fire. All that before the promo tease then begins to shift the balance, maybe less of the Reeds and the electro rock and leaningmore  heavily towards the Macca influence.

The Jeff Lynne meets the Beatles via the Hewerdine songwriting direction surfaces in Work In Progress; easy classic songwriting that can be traced back to those roots. In fact they’re Sgt peppered all over the album. Dip in at most points and you can likely hone in an something relevant. Get Back To The Sun, evokes the mid paced tempo of Mr  Blue Sky, while Mademoiselle covers all bases – energy, longing, regret and reflection and the sort of radio friendly, irresistibly catchy, poptastic chorus that as O’Shea explains “never did The Police any harm.”

Being mentioned in the same breath as Mr Sting and the fab four, Talk Show can’t be too far off hitting some marks.

Watch Mademoiselle from the album here: