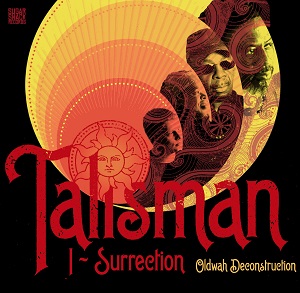 Roots reggae pioneers, Talisman return with a dub version of their 2013 album. Louder Than War’s Paul Scott-Bates is keen to review.

Last years I-Surrection album showed the World that good old reggae is exactly that, it needs no changing or updating because it’s absolutely timeless. As with any good reggae album, a following dub version seems almost inevitable and this is no exception.

Original versions of the tracks on I-Surrection were given to Dave ‘Oldwah’ Sandford, a producer and musician with a lifetime love of reggae and an ear for the great reggae sound of the 70s. Talisman have that sound and Oldwah was determined to be a part of it. The new dub version contains twelve tracks including unreleased tracks from the original sessions and new mixes of the highest order.

There’s nothing that can accurately describe the feeling of listening to superb dub records, just sit back, close your eyes and listen. It’s an unparalleled joy to behold. Not only does Oldwah take individual instruments and dub them out but also blends instruments together to create something very unique. From the start of You Can Cry If You Wanna to the end of Old Wine this is pure heaven.

As the Sugar Shack explain, there are “no gimmicks or crazy effects” they’re just great tracks pulled apart and re-arranged with rewards on every new listen. It’s a man with a love and a passion for dub and reggae cooking up an album of genius.

Whether it be the lethargic drum sound of Season For Freeman Alt Dub or the throbbing bass of the incredible Hey Yout 2, the quality of simple but effective dub on this almost is stunning. Hey Yout 2 wallows in its unadulterated simpleness. When I played this album in my car the bass throbbed beneath my accelerator.

Dub is a journey and whilst there are people like Oldwah around churning out superior quality mixes like this, it will be an endless trip.