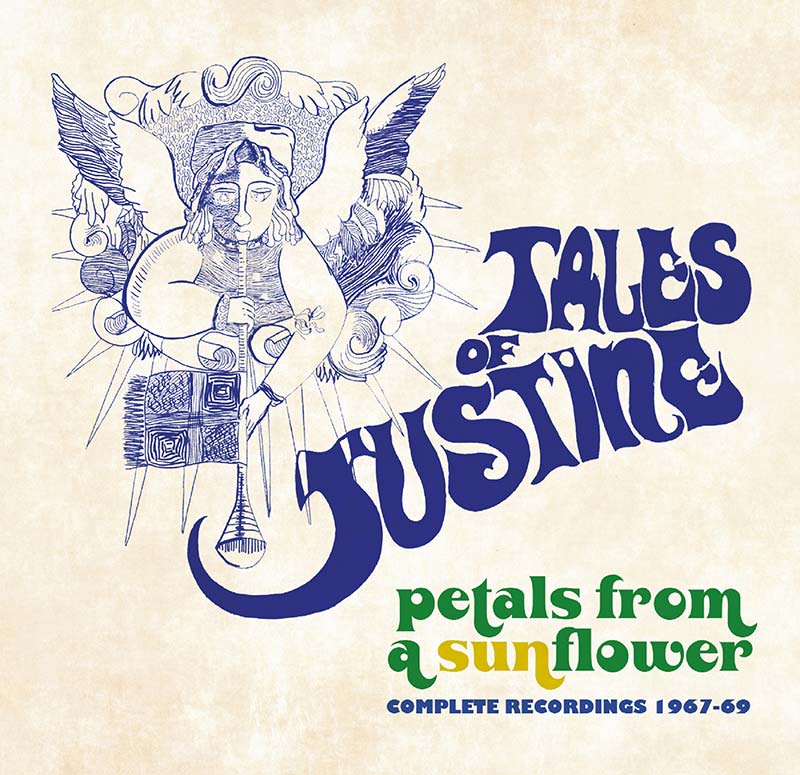 Petals From A Sunflower: Complete Recordings 1967-69

The full recordings available for the first time on CD by a band best known for their sole single, the Psychedelic compilation stalwart “Albert”/”Monday Morning”….LTW’s Ian Canty looks into the rich history of a band undeserving of their many years spent languishing in total obscurity……

Tales Of Justine were one of those bands that came along at the outset of UK Psychedelia in the mid to late 60s but their pop dabbling soon lost them the “head” audience as the fashion went more towards heavy, experimental jamming rather than their snappy but trippy songs. Though they (and bands like them), never quite cut the mustard with the hip crowd back then, time on the whole has been kind to them and the type of “caught between two stools” late 60s Psych-Pop that they turned out has subsequently found favour with people all over the world that were too young to experience the Summer Of Love themselves, but wise to the value of a good tune well performed. That’s the odd thing about Psychedelia in broad terms – it worked as expansive, highly experimental underground music but somehow also as an intricate, “instant-nostalgia” pop art format. Justine clearly fitted comfortably into the later group.

With a past that dated back to Potters Bar beat band the Sound Of Silence, Tales Of Justine were spearheaded by the talented David Daltrey, singer, guitarist and yes, relative of the ‘orrible ‘Oo’s Roger. After a brief time as the Court Jesters, they assumed the Tales Of Justine name and hit the early 60s Psychedelic scene that was taking off in clubs such as Middle Earth and the Electric Garden, in the hope that they could become leading lights in the mode of emerging stars Pink Floyd. They were in truth far more traditional in their approach, very pop-orientated indeed and as the evidence here displays, far the better for it.

During the summer of 67 they were espied in concert by Tim Rice, who quickly came to realise their potential. Rice, who along with his partner the awful Andrew Lloyd Webber would of course go on to write some highly lucrative and bafflingly successful musicals, was at this time keeping a keen eye on the pop scene for any rising talent in his role at EMI A&R (and this interest carried into the 70s, with their involvement in Silverhead, noted here). Daltrey and Co clearly fitted the bill. He quickly signed them up to a management contract and also got their monikers on the dotted line with his record company overlords too. Success only looked a short step away for Tales Of Justine, but it didn’t quite turn out that way….

Sharing some common ground with fellow Psych-Pop would-be wunderkinds Muswell Hill’s Turquoise (the makers of “Tales Of Flossie Fillett”, who benefited from some association with their near neighbours the Kinks), TOJ specialised in a whimsical and stately version of Psychedelia, but they were not adverse to throwing in the odd mind-melting Freakbeat-esque effort when it pleased them (the stop-start “Sunday School” and the rough version of “Evil Woman” are both somewhat in that mode, some cracking fuzz guitar included in both). Though the Rice/Lloyd Weber patronage got them into Abbey Road to record (which explains the high sound quality on this lovingly-realised collection) it couldn’t even get them more than one record released. In truth the A side “Arthur” was far from being their best material, being a merely ok bit of nursery rhyme of Psychedelia, which does not display them in their best light at all. It is hardly suprising that it did not make an impact in the winter of 67 when the charts were awash with this kind of thing (Rice admits on the sleeve-notes that they should have flipped the sides with “Monday Morning”, a nifty piece of Mod guitar pop with way more appeal, being far the better of the two recordings on the single). What is harder to understand is why no-one at EMI thought that anything else they set down at Abbey Road over the two year period documented here other than those two tracks warranted any further exposure?

But of course the single flopped and that was the end of Tales Of Justine, as far as officially released material was concerned anyway. Despite that they recorded repeatedly over the next year or so and those recordings that never saw the light of day at the time make up the bulk of this compilation. The sad thing though is that the potential of the band is clear to see. A case in point is the goofy but wonderful “Come To Me Softly” (actually a David Daltrey solo) – nonsense female vocals, parping horns and a crashing guitar which prefigures cousin Rog’s “We Won’t Get Fooled Again”, all adding up to an attractive and totally adorable novelty. The “Victorian Music-Box” sound of “Sitting On A Blunestone” is another joy to the ears and “Pathway” has the kind of melodramatic, highly orchestrated and well-arranged (probably down to Lloyd Weber I suppose, I’ll give him that) feel that gave the Walker Brothers so much success in the same period. Very well sung too. The “bad trip” story of “Eleventh Obsolete Incident” is also outstanding and would have made a fine single, like most of the tracks here (which again makes you wonder why they plumped for “Arthur”?). In an alternate world, they would have been a hit machine.

This collection contains everything that Tales Of Justine laid down on tape at the time, along with a couple of solo David Daltrey recordings, all which glisten with the hope and heady atmosphere of that moment nearly 50 years back now. You also get the full, convoluted story in David Wells’ excellent sleeve-notes in the booklet (Wells’ release of the same name on his Tenth Plant imprint nearly 20 years ago presented more Tales Of Justine material for the first time and forms the backbone of what is presented here) to accompany the jaw-dropping beauty on show here amongst the songs. Tales Of Justine never made more than a ripple at the time but this set does deserves much more – the 60s flower children missed out on some great tunes. A combination of bad luck, bad timings and bad advice contributed to their eventual fate, but we can be thankful that what has endured in the dank vaults at EMI for all those years has finally seen the light of day. They were brilliant at times were Tales Of Justine and now we can finally tell.