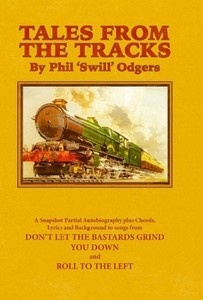 One half of the legendary joint vocal strike force of UK folk rebel rockers The Men They Couldn’t Hang publishes his ‘partial autobiography’ & songbook (to his latest two solo albums). Ged Babey attempts a balanced review.

When I moved to Southampton in 1984 Swill Odgers had long since left the city to go to London.  Several people I got to know, including my future-wife, had known him and Paul Simmonds when they lead the second-best punk band in town Catch 22.

When the new band Swill and Paul formed in London, the Men They Couldn’t Hang released the Indie Chart-topping and Festive 50 entry (number 3) ‘The Green Fields of France’ it was long overdue recognition for the local boys turned Men.

Personally though, I couldn’t quite understand why former members of a punk band had chosen the path to Folk Music  ……(my favourite bands at the time were Sisters of Mercy and Virgin Prunes…)

Around the year 2000 I started compiling an Oral History of the Southampton Punk Scene 1977-81 -which remains unfinished and unpublished to this day, Swill asked me if he could use some of the quotes from former mates and rivals in his book. There are three pages of the stuff in Tales From the Tracks,  I am happy to have been able to help and am aware this should disqualify me from reviewing the book objectively… but, as I said, I never really ‘got’ the Men they Couldn’t Hang; too ‘folky’ for my taste, and Swills latest songs are far too mellow and Country for me. That said, the fact a couple remind me of Jim Reeves, who my mum loved, means that they have managed to strike an emotional chord with me.  (I’m sure Hank Williams would be a preferable comparison Swill – but a Jim Reeves LP was the literally the first piece of vinyl I remember my mum buying).

Tales From the Tracks goes some way to explaining why Swill has made the musical choices he has.  Partly a  search for authenticity and music with a tradition and history and solid ‘meaning’ behind it. He found it outside of rock and pop and through family connections and the people he met.  Swill family included a Scots grandmother, Irish mother and Yorkshireman father. He ended up being raised in  Chatham and then Hampshire after being born in Oban,  so his roots were Celtic. Hence the TMTCH cover early on of ‘Donald Where’s your Troosers?’ .

It’s an fascinating book for the devoted – but it’s difficult to say if a wider audience will be as enamoured. You do have to have some kind of emotional vested interest to fully appreciate it.  Whether it is the fact that you have followed the Men for years, decades, love Swills solo work or have met him at some point over the past forty years and found him to be a fine and brilliant fellow. ( I’ve never met him to be honest!)

If you are a devoted follower of the Men They Couldn’t Hang then, you’ve probably already got the hardback edition of this book via the Pledge page and you almost certainly love it.  Loads of background to the latest songs and insight into the beginnings of the band and Swill’s life and early musical escapades – or at least ‘snapshots’ of it -and how the two relate to each other.  It’s a ‘then’ and ‘now’ book -also partly about the process of writing it – and a thank you to the loyal fanbase -who basically seem to be an extended international ‘family’.

Lovers of a good music biography may be disappointed with the biog/songbook format -as the latter is much more detailed -with background notes on the recordings, lyrics, in-depth.  The story of Swills life and the accidental forming of the Men They Couldn’t Hang is told episodically and in a conversational unpretentious style. It’s a great read but as he admits, not the whole story. The ins and outs of record company wranglings have been left out thankfully; they would have been dull anyway and not the aim of the project.

I wouldn’t be surprised if there is another volume in a few years time as Swills enthusiasm for his music and camaraderie of being a musician jumps off the page.

As for the songbook, well it depends how much you like the songs –  the ‘Roll To The Left’ album is polished work with a very strong Country influence. Swill even used Johnny Cash’s guitar on the recording!  It’s a warm, mellow album and the songs I can connect with are the string-laden Mist On The Water, set in Netley down by the river (where I too used go crabbing when my son was young)  and the simple eulogy to ‘Eddie’ – former punk who dies at 50 and has Stay Free played at his funeral (been to a few of those).   There a great review here which gives a more informed opinion than mine.

There are the obligatory songs about trains, roses and drinking til three in the morning – and the most immediate , catchy and universal song is called ‘Don’t Let the Bastards Grind You Down’.

So you can chuck away your Burt Weedon Songbook and instead Sing-and-Play-Along-with-Swill, after you’ve read about the making of a Man they just couldn’t Hang.

All Swill’s vinyl, cd’s and merch available from here