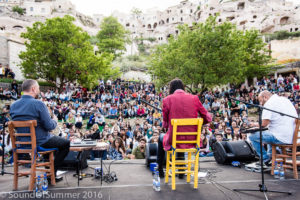 Reporting on the Taksim Trio Alan Ewart brings us the latest in a series of articles from Cappadox festival in the Cappadocia region of Turkey.

Taksim Trio are Husnu Senlendirici (clarinet), Ismail Tuncbilek (baglama) and Aytac Dogan (qanun).  All three musicians are well known in Turkey and are virtuoso’s in their own right.  They have come together to create a unique fusion of sounds, a sound that defies categorisation  and truly emphasises Turkey’s position as a cultural melting pot.  When you combine their wonderful music with a breathtakingly beautiful location you create an experience that must be marked down as mind-blowing.

As music writers we seem tied to trying to pigeonhole music as belonging in one genre or another.  With Taksim Trio it is virtually impossible to do this.  They play traditional eastern instruments in a western style.  They mix classical music with acid jazz, and progressive rock, they add a dash of Arabesque and top it off with Turkish folk music.  The blend may seem confusing, especially as they are also very improvisational, but when you listen it all makes sense, even if you don’t understand the lyrics of those songs that are sung. 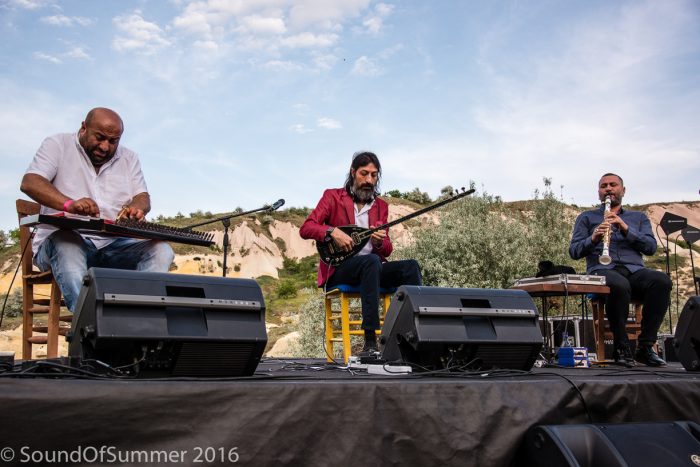 I spoke to Taksim Trio before their set and they told me that “we all bring different elements and influences to the Trio.  We see each place we visit as having its own spice.  We blend those spices with traditional Turkish folk to create a dish that is colourful, interesting and engaging.”

“We have played together for many years and we grew up in the cultural melting-pot that is Istanbul.  When you are steeped in the culture of Istanbul you absorb a wide range of influences, it becomes a part of you.  It’s an organic process, we don’t really have to think about it.”

When the band took to the stage it was easy to understand those influences and the almost telepathic understanding that the Trio share.  For me the Taksim Trio are one of those rare bands where you feel their music rather than just hear it.  You know, the type of band where you feel every nuance, every change in melody or pace, where you drift off into your own mental space and just absorb the music.  As Taksim Trio played I could feel the enthusiasm of the crowd, at one point they burst into song as the Trio played a traditional Turkish folk song without the lyrics. 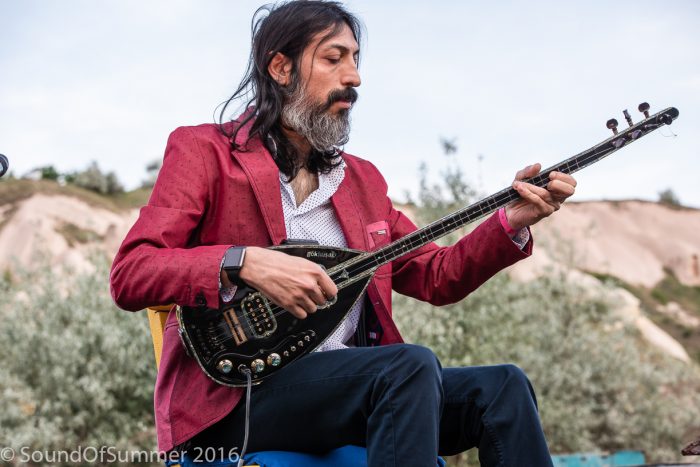 It was perhaps this that made me understand where Taksim Trio were coming from when they told me that “the crowd has a huge impact on how we play.  We are much better and more innovative when the crowd are really engaged, we try to see the show through their eyes and that helps to shape our solo’s and improvisation.”

“We don’t practice a setlist, we just instinctively know what the crowd wants and that dictates where we take a particular song.  The more the audience joins in the better we play, we just want everyone to join in and enjoy the music.”

Join in they most certainly did.  The natural amphitheatre was packed, the show a sell-out and the audience had come to engage and enjoy, of that their is no doubt.  Clearly inspired, Taksim Trio held the audience, spellbound, in the palm of their hands.  The atmosphere was electric and the Trio thrived on it, the solo’s were an absorbing showcase of consummate musicianship but it was the combination of those spices that had an almost hypnotic effect.

This was without doubt one of those gigs that you file away marked “precious memories” they really are that good.