More than just a ‘Local bands for local people’ compilation CD. Put together to promote all-day charity gig this Saturday 6 October 2018 following a Facebook post -it’s eclectic, fun and showcases a variety of maverick talent from the place no longer known as ‘Sofa City’.  Ged Babey strives for objectivity.

The heyday for the regional compilation album was 1978-81 post-punk era.  Probably the first and the most well-known being Vaultage ’78 – the Brighton area compilation, much played by John Peel, which gave us the Piranhas, Peter & the Test-Tube Babies, the Chefs and the mighty ‘Bloody’ by Golinski Brothers. There were various artists collections from Sheffield, Bristol, Liverpool, all-over the UK to prove London wasn’t the only place that was ‘happening’.

Southampton had its own Vaultage equivalent in 1980 called City Walls – (the working title being Derby Road -named after the city’s red-light district). One of the people behind it ended up a City Council bigwig, so the rejected name never had the chance to come back and haunt him unfortunately.

In 1990 there was a really great Southampton compilation album released on cassette, called The Peacenik Tape – Setting Fire To Sofa City – which showcased nineteen ‘local heroes’ but still only scratched the surface of the musical activity in the area.

Fast Forward to 2018 and this new ‘mixtape’ was compiled after a Facebook post about a charity all-dayer said “Hey , we should do an old-fashioned multi-band album..”  Pete Harvey (Sofa City Bands Collective, Neko Roshi, co-ordinator of the Peacenik tape, all-round McGann brother lookalike) Jack Hargreaves ( Bitter Self Exploitment and not the whiskery old presenter of Out Of Town) and Dave Sharpe (Sharproduct label boss, record collector, beer-monster and sex-god) got together and asked for submissions and this is the result.

Twenty acts, a real variety of genres and a great snapshot of just some of the fantastic under-the-radar music in Southampton.  (Yeah, despite living there, I only actually know people from 10 of the 20 acts, have reviewed 6 of them before, but will be as professionally objective as I can…).

Notably one band who were on 1980’s City Walls LP are on Taking Liberties: Inferior Complex. Their contribution here is a historical artefact in itself.  Entitled ‘Southampton Punks’ its a recited list of 70 odd people who were there in 1976-1979. ( Obviously there will be some omissions but…) it’s an attempt at documenting the history as they see it, respectfully including the deceased, the living and contemporaries from Stratejacket, Catch 22 and the Men They Couldn’t Hang.  Musically it’s a great piece of distinctive, moody slow-build post-punk.  Guest narrator Paul Beazley does a sterling job. It’s an emotional centrepiece to a very enjoyable compilation.

Current young punk bands (for want of a better term) on the album are the wayward and wonderful Bitter Self Exploitment who contribute their anthem Lanky (‘fuckin) Jeff:  the brilliant Brash Bullets (I still haven’t seen the new line-up!) Murderers Row -a great piece of ‘screamager’ type tuneful hardcore and grunge-punks Riteoff who are a triumph of enthusiasm-over-ability but have potential.

The Soofsayer -a one man band with a penchant for Gang of 4/early Mekons is a stand-out for tackling socio-political concerns unapologetically on a song called ‘Blame’ Anyone else but you!.

Veterans The Flying Alexanders  -a great live beer’n’fags punk rock’n’roll band, contribute a new song ‘Paranoia’ which despite sounding like Danny Dyer fronting Dr Feelgood on a ska-punk number, just doesn’t represent them as well as it should, whereas Neko Roshi‘s Round Peg does show them in a good light. Pete Harvey should be a songwriting national treasure (two of his previous bands Trip and Up Balloon Up featured on the Peacenik tape) and Neko Roshi are his grittiest power-pop band yet.

The Sturmey Archers excellent  but lo-fi noo-wave jingle-jangle gem will win them admirers with there location specific Totton Girls, which manages to mention a whole load of Southampton suburbs in relation to the females from said localities. Maybe you have to know Rumbridge Street to fully appreciate it but its a great song  if you disregard the slight retro-chauvinism.

The Chateau Bateau Band and The Beehive will appeal to lovers of rootsy and modern folk music  respectively (he says trying to be diplomatic) and I will pass any forthcoming releases on to LTW’s Folk Expert, promise.

Straight to Cake are a curious ukelele act who are probably best caught live and Leon C brings a touch of  Jacques Brel rather than Ed Sheeran to his acoustic guitar/synth contribution here. One to check out if that’s your kinda thing.

Continental Liaison  are not  a band I know but a nice surprise in that this track sounds like an electronic Billy Childish jamming with Suicide and their song Red Mist features the line If anger is an energy, you could power towns off me.

The BC Experiment‘s song Marry Me  is a bit more romantic than their usual sweary comedy-punk-ska sing-alongs from what I can gather and is a decent bit of New Wave for the white-van-man crowd.

The Crow Flies are heavy psych-jam instru-mentalists Pete Hutton (who’s drummed for loads of bands over the past 40 years) rock’n’roll animal Perry Flatt and the legend that is Onion (bass monster, beard cultivator and Joiners barman).  They simply rock like bastards.

Wordsmith and social commentator, Dan O’Farrell (& the Difference Engine) should be a national hero by now and his band launch their new album on 9th November (same day as the Blinders play Southampton and the Rising have sold-out the Joiners! ) they donate an exclusive track, the mellow, sun-dappled It’s So Hard. (Oo-er!)

Sombrero Fallout are a great mix of bouzouki and trombone, world music and electronica with guest vocals from dub poet Issa. ‘How the Light Gets In’ is perfect example of their laid-back and unmistakable sound.  One of the most talked about bands from the recent Music In the City event.

Marco Lo-Fi contributes a track from his forthcoming ‘Walker To Rehab’ album and it’s a cracker called Hot Mess – a mash-up of  Beasties Boys, Mondays, Garage guitar and beats.  Upbeat and full of joy despite being about being in rehab.  Aaron from Bullybones guests on one-take howling guitar and it was co-written by Courtney CC Campbell and Marco.

Mad King Ludwig & The MoJo Co‘s  Cranial Boss Sa-Sa Orchestra is a amazing slice of  baffling exotica with a bit of a Bad Seeds feel to it,  over which the Royal Loon intones his voodoo. The single most unique band in Southampton , if not the country.

All in all it’s a surprisingly good compilation which flows together well despite the diverse elements and niche tastes catered for.  There is a many-faceted identity to the Southampton scene made up by these bands; outsiders united by music maybe, who make crafted or inspired, raw or emotional music – expressing something about themselves or the place they come from.  It’s also fun and accessible stuff  and doesn’t consist of cover versions or X-Factor karaoke.   And yep, it still has a punk attitude at it’s core and one of civic pride. 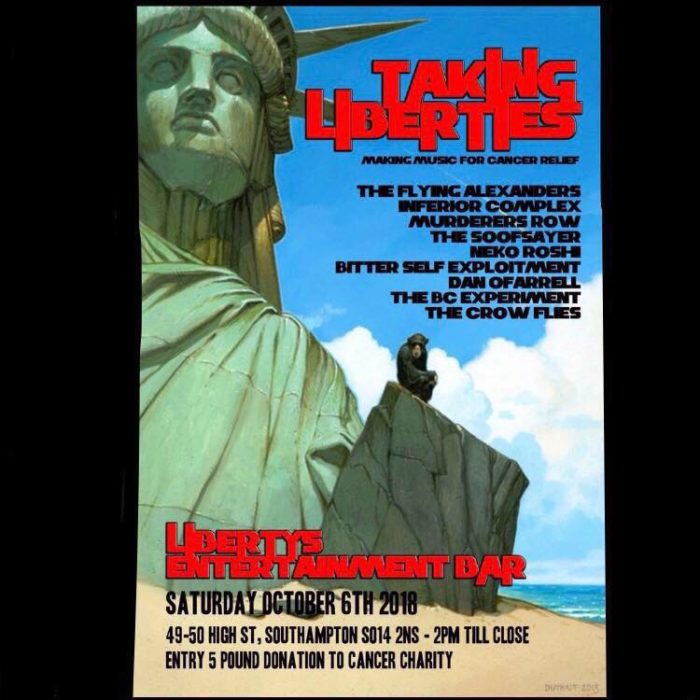 The Album is available at the All-Dayer on Saturday 6th October at Liberty’s Bar  ( 50 High St, Southampton)  – starts 2pm £5 -details on poster above.

Limited copies will be available by mail order from Sharproduct after the gig.