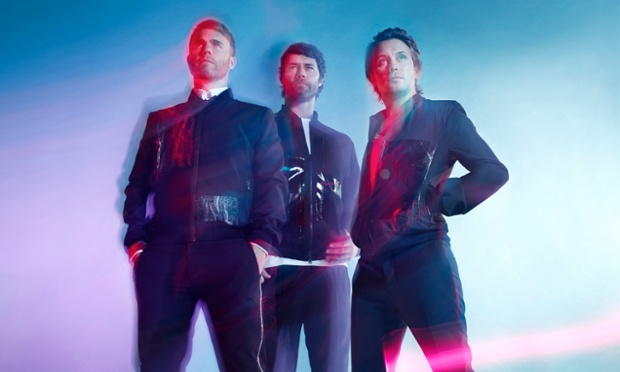 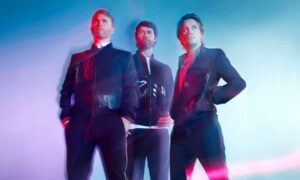 Despite being down to just three members (from the original five) and having faced allegations of getting involved in tax avoidance schemes, perennial boy band Take That are back out on a massive UK arena tour.

Our boy band-loving Features Editor Sarah Lay goes misty-eyed for them in Sheffield.

Sometime in Autumn 1994, on a dark and wild night, I made my way to the arena in Sheffield with my best friends. We were clutching homemade banners and wearing too much make-up. We were manic with the shared giddiness of where we were, what was happening.

It was the first time I had seen Take That, the boy band then at the peak of their first-time-round fame. Was I there for the music? In some way, yes. There were then, as there are now, some massive pop anthems being blasted out over thrilling stagings, by this band.

But it was mostly no, I was there because Take That were something I had been sold by Smash Hits and Live and Kicking as the dummy run for adult feelings. We were, as Take That themselves would mock from the safety of their tour bus, in love with an image.

And now, here we are, all these years later on another dark and wild night, heading to the arena to see what is left of Take That. The giddy excitement hasn’t disappeared, it’s just subdued by the sheer mass of day-to-day life which now takes up head space that used to only be inhabited by detailed If Destroyed Still True engravings on a Forever Friends pencil tin.

Along with the trepidation about whether a diminishing number of members can still make the heart beat as fast there is also the anticipation of the spectacle Take That present in their live shows. They have ridden through the crowd on mechanical elephants, they have raised a Gormley-esque statue in the middle of stadiums. They have blasted us with ticker tape and reflected the stars into our eyes with their fireworks. The recent album (III) didn’t offer an obvious theme for the shows, at least not in the same way that The Circus and Progress did. It was all to play for as we waited for the lights go down tonight.

And what we get to start with is a long set-piece of theatre with steampunk styling. There are slightly sinister shadowy men marching around the stage, a post-industrialist attempt to power up the show through a hamster wheel and bike. There are fiery reds and browns and a deep bass.

Then there is colour and dancers and the Lost Boys of pop as the looping intro crunches into the Goldfrapp-like groove of I Like It. From here they head into Love Love, keeping the beats heavy as the lights pulse across the arena and then to the anthemic Greatest Day.

There are some nice, surprising, additions to the set as well – Hold Up A Light is sandwiched between III track Get Ready for It and the single which they made their comeback with in 2006, Patience. Rather than highlight the absence of Robbie Williams and Jason Orange this jumping around in the band’s timeline just serves to reinforce their history, the shared soundtrack we all have.

The theatrics keep coming throughout the show. They draw a curtain around the run-way, separating those in between it and the stage from the rest of the arena with a curtain. Onto this they then project a shadow puppet show as we get the less-well-known Circus single The Garden. The curtain is then drawn back to reveal a new stage set of glowing sea creatures. Huge neon jellyfish bobbing above the catwalk as  the air ripples with blue and green light.

Later we are given the spectacle of a sun being made and raised above us, sparks flying as it spins over the audience. There is contemporary dance too from Howard Donald and Mark Owen, an unexpected step away from their usual references to the breakdancing crews some of the band started out in. But they also give us what our nostalgic hearts desire as the single remix version of Could It Be Magic is completed with original synchronised dance moves.

Vocally there are some weaker moments and although every song included is strong on record some seem to work less well tonight. The tracks taken from Progress suffer for the absence of Robbie Williams’ distinctive vocals and Affirmation in particular has an awkward setting as the band go into a sort of gospel/Kraftwerk mash-up.

But these dips are easily forgotten when pop highs are just around the corner and before we know it we’re riding out the last songs.

We’re blasted with the synth-laden march of These Days, the orchestral sweep and shooting stars of Rule the World and then the encore of Shine, where again the band play with the parting of the ‘Golden Circle’ and rest of the audience through use of material covers.

And then we’re at the end, again. The moment which has happened at touring intervals across the last 20 years of my life, the point at which the image burns brighter, branding itself into my heart once more as I’m thrown back out into reality.

That moment is soundtracked by Never Forget, a song which so well captures the fleeting nature of success, the humility with which Take That The Boy Band have always presented themselves (and who knows what is genuine and what is marketing hype now? We’re so far through the music industry looking glass it would be foolish to try and discern) while also, strangely, reflecting how it feels to have been in love with the idea of this band for so long.

As one we all throw our arms up and swear to never forget where we’ve come here from, to never pretend that it’s all real, and accept that someday soon this will all be someone else’s dream.

Then we trail out into the dark and wild night, feeling as young as we did the first time and still hoping for more.

All words by Sarah Lay. You can find her on Twitter and for her words about other music (it’s not all boy bands) check her profile on Louder Than War.