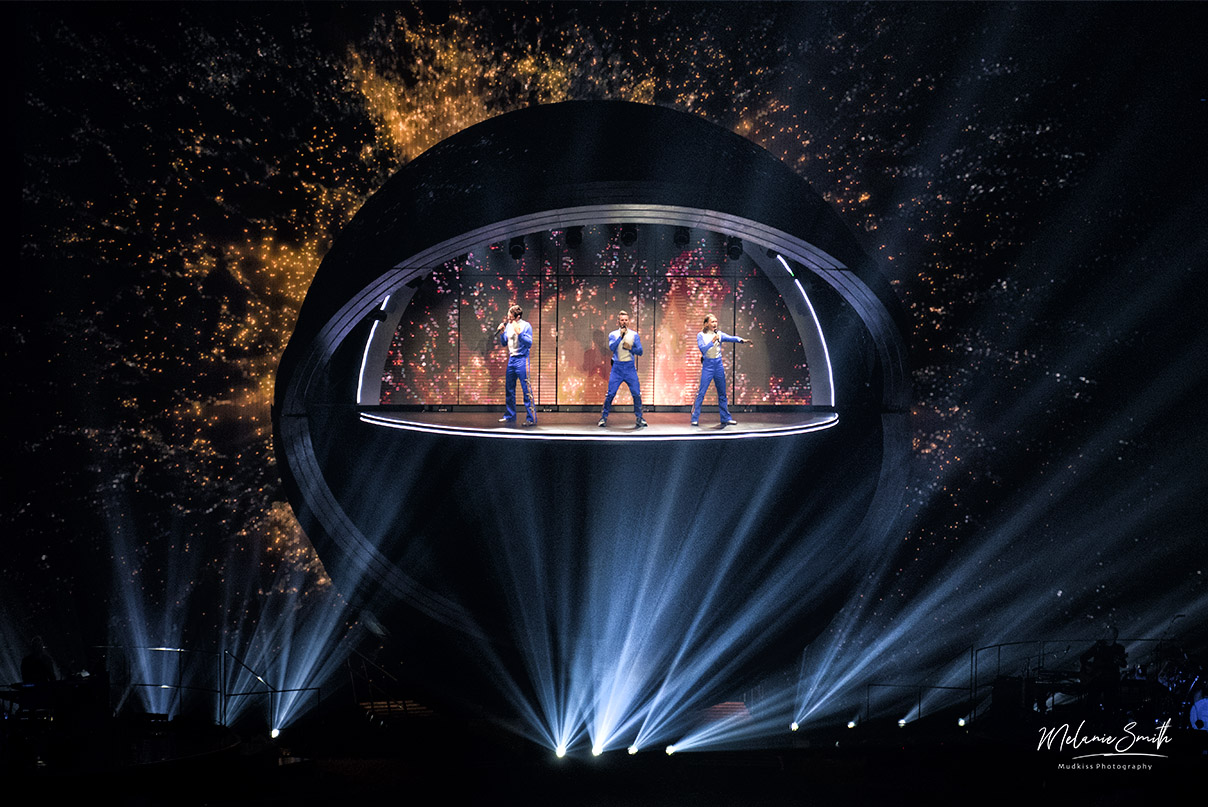 Manchester’s all-conquering man band continue their odyssey as a trio.

Celebrating 30 years is no mean feat as a band. Whilst Take That are flying as a trio now, the way they have come back and stuck around shows the determination of Howard, Mark and Gary.

Playing support to the band on their Odyssey tour was 80’s pop star Rick Astley. In his short slot, the Lancashire man played a few newer cuts from his most recent chart-topping record as well as partaking in some questionable cabaret crowd participation. His appearance was bookended by the 80’s pop staples, Together Forever and the monstrous Never Gonna Give You Up, after a cover of Calvin Harris/Rag’n’BoneMan hit, Giants. 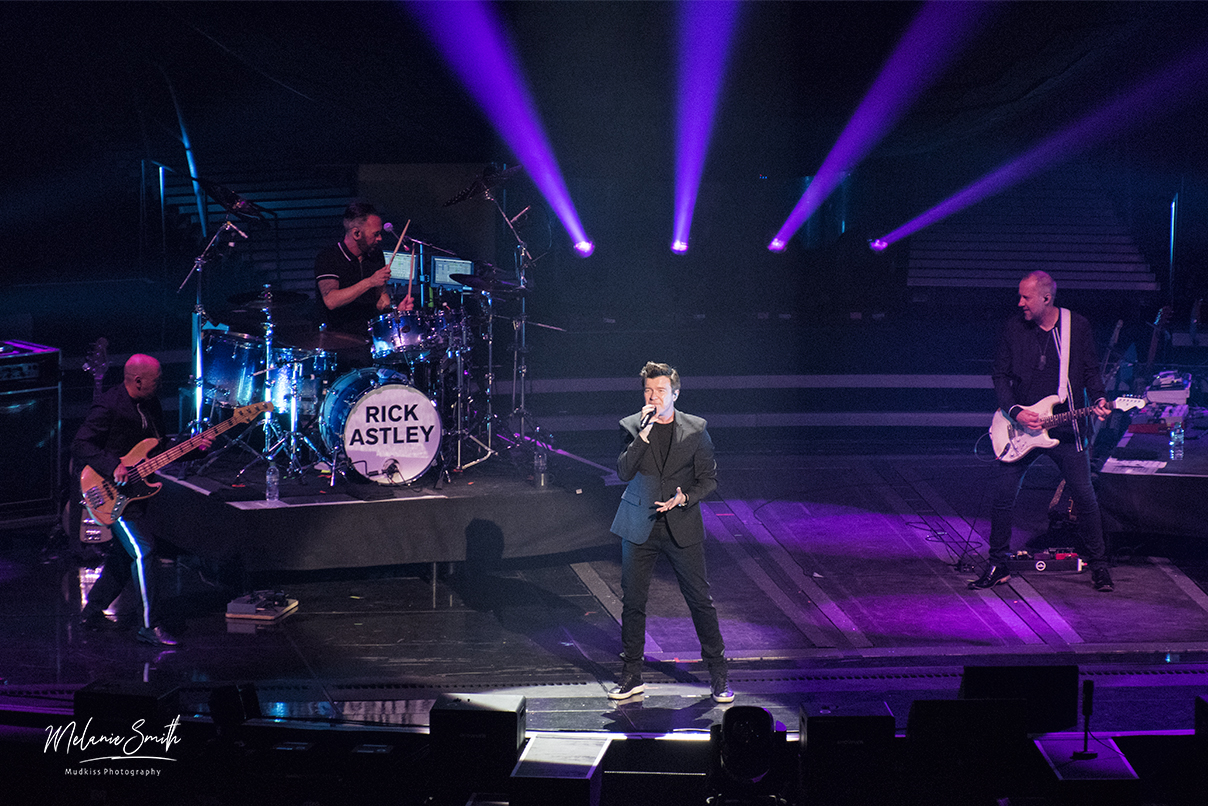 In the crossover between the bands, there was a Pink Floyd like ambience in the build-up to the show, fragmented vocal lines and rolling waves over a huge spherical video wall that resembled Pac-Man set the scene for the following two hours of wall-to-wall hits. 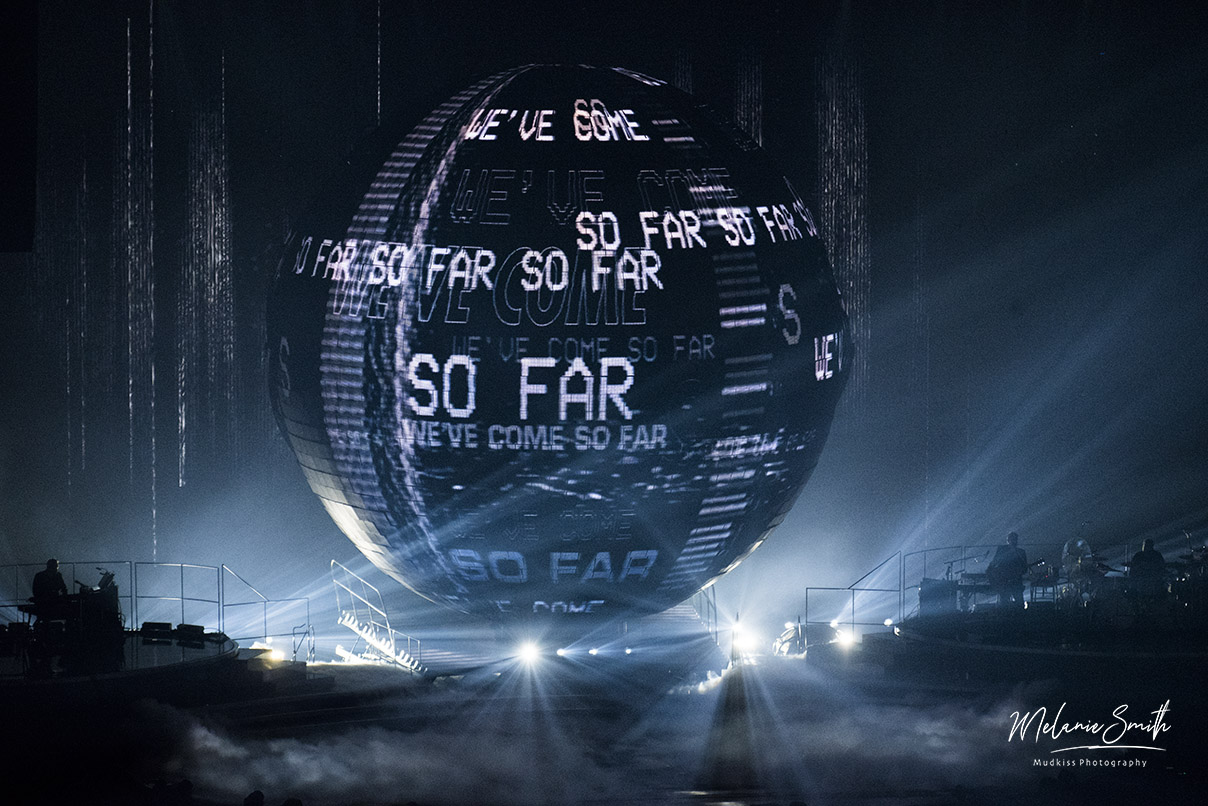 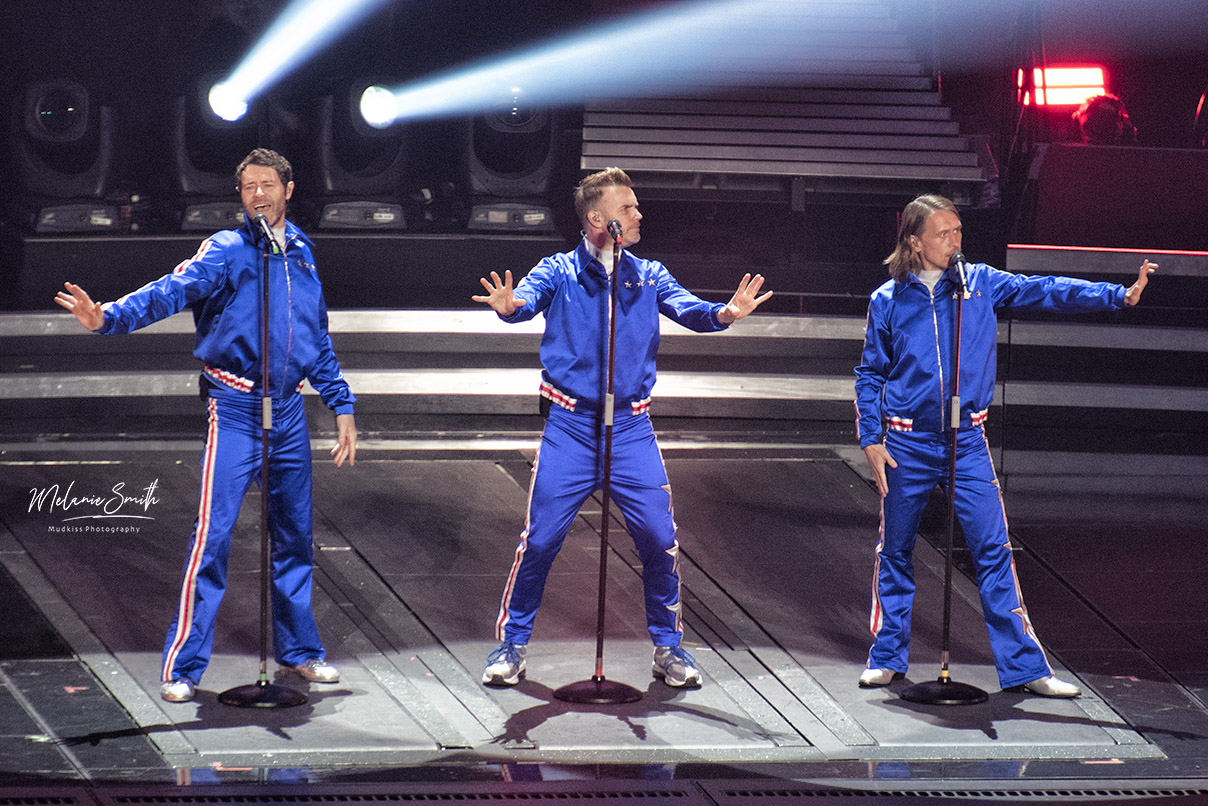 Each song that the band delivered could have been an end such was the crescendo and response that each number was met with. Opening with Greatest Day and following with old school hits, It Only Takes A Minute, Could It Be Magic, and Everything Changes, the crowd were transported back to the start of the bands journey, decked out in all American attire.

The start of the bands odyssey was acknowledged onstage by Gary Barlow. December 1989 was the band’s first meeting; now, ‘feeling blessed,’ they have had Manchester Arena ceremonially named after the band for the week of their shows (their 46th – 50th shows at the venue) due to the record-breaking nature of their tenure at the venue. 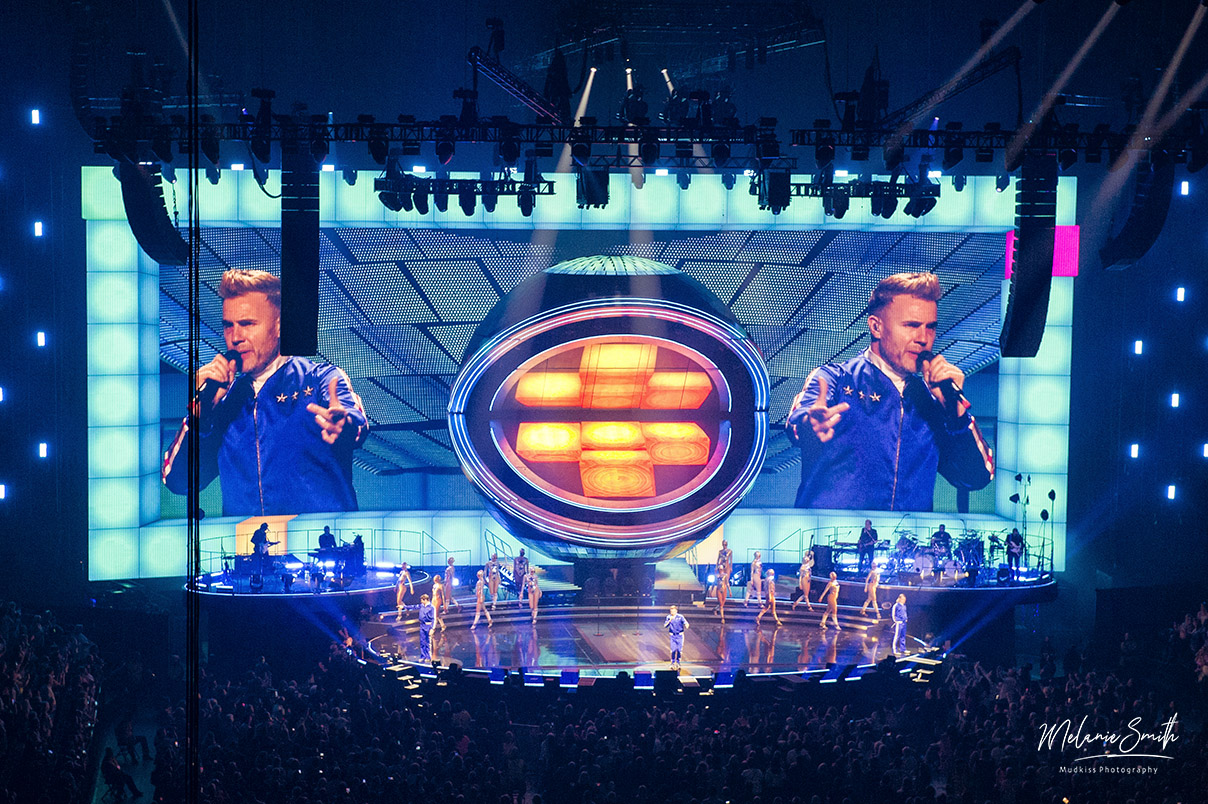 Spin was followed by another lukewarm single in Cry. The drum and bass crossover is lost on a few and the request for people in the crowd to ‘get low’ and jump and dance feels a little too staged in an all-seated venue. As the band made their way to a b-stage, the band were joined via the huge video screen by The BeeGees to assist with an acoustic-led rendition of How Deep Is Your Love. This is a classic song and Take That deliver it superbly. It was noted by the band that it was the last single they released before their initial break-up.

Take That deal in arena-sized anthems that everyone can belt back to them whether they were teenagers the first time around, teenagers now, or any other age denomination. A Million Love Songs, Babe, and Back For Good were all bellowed by the 17,000 strong crowd. Add in more recent singles like Patience, The Flood and Rule The World, and for those devoted fans, you have a dynamite concoction. 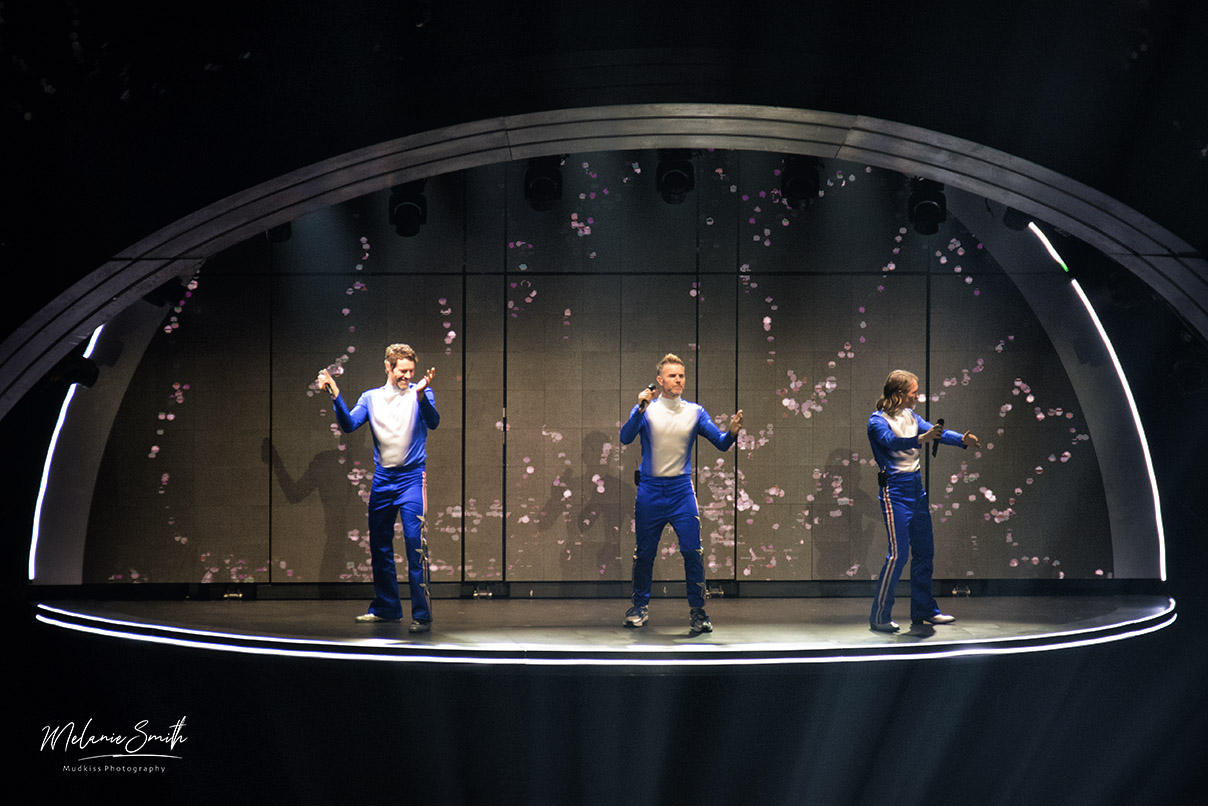 As the concert headed into the home straight with a superb rendition of the Mark Owen led Shine and the Howard Donald led Never Forget, the band took Manchester to church. The uplifting and untouchable gospel tinge of Never Forget led straight into the huge surprise of Lulu reprising her role as part of the band for the highlight of the evening, a re-worked Relight My Fire. At 70, her vocals were still spot on and the chorus of gospel singers helped make the song completely transcendental. This is the exact thing that pop music should be; all-inclusive, fun, and completely uplifting.

Closing with Rule The World and a wild noise in the arena, Take That show that thirty years on, they still know how to wow a crowd. The productions have grown, but the songs remain the same; this is a testament to the band, in whichever guise they take. This retrospective is a cool show, and the little snippets of videos and interviews of the hysteria the band created in the ’90s sprinkled throughout the show add to the spectacular narrative of the past thirty years for this band.

Please note: Use of these images in any form without permission is illegal, they are bound by a contract. If you wish to contact the photographer please email: mel@mudkissphotography.co.uk