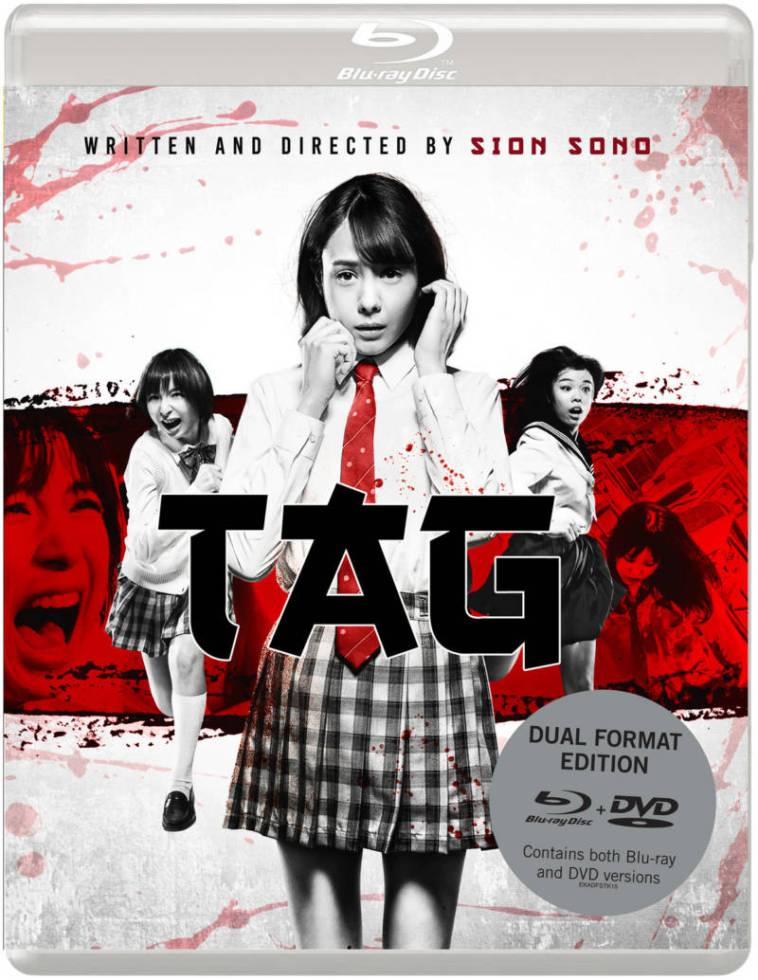 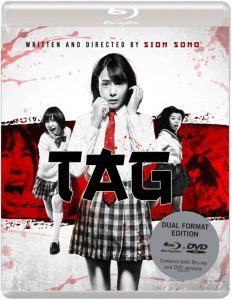 Jamie Havlin takes a look at a surreal film from Japan that manages the rare feat of combining gore galore with an artistic, experimental sensibility.
Tag is a film I won’t be forgetting any time soon.
It’s almost as if director Sion Sono had read Alice in Wonderland and decided to make his own ultraviolent version of the story, letting other influences like Run Lola Run, If…., The Devils and Valerie and Her Week of Wonders, percolate throughout his script.

Mitsuko (Reina Triendl) is a very ordinary schoolgirl travelling with her classmates on a bus when an utterly extraordinary series of events engulf her world without warning. While her giggling classmates embark on a pillow fight, Mitsuko happily composes some lines of poetry in a notebook rather than joining in. She drops her pen and, as she bends down to retrieve it, a malevolent unseen force like a hurricane cuts precisely and horizontally through the middle of the bus, leaving every passenger bar Mitsuko sliced in two, blood gushing from their bisected torsos.

Traumatised, Mitsuko flees down a road chased by the wind and meets other young people who are again sliced in half. She continues through some woods and finds a lake strewn with yet more dead schoolgirls. She washes herself in the water and takes some clothes lying by the riverbank that obviously belonged to one of the girls.

Mitsuko makes her way to school, where she’s greeted by some of her classmates, Aki, Sur and Taeko, although she struggles to recognise them. She initially declines to explain the madness that she has just witnessed but her pals sense from her bewilderment that she might be suffering from some form of amnesia.

She then explains that she had a very weird dream earlier which she goes on to briefly outline.

The girls skip a class and discuss what Mitsuko has said, one girl claiming that what she has described could have happened. ‘The amount of alternative realities are infinite,’ she explains and the foursome discuss destiny and if multiple versions of themselves could exist.

What follows is just as strange as the opening sequences, at times like one of those long, action-packed and vivid dreams involving chases that many people experience occasionally. Except much more disturbing with death and destruction never far away.

There’s a high school massacre with a difference, a wedding involving a grotesque half-human, half-pig bridegroom and Mitsuko even morphs identity on a number of occasions for no easily apparent reason – although all will be explained in the final act.

Always unpredictable and truly bizarre, Tag is beautifully shot and features some fine performances, particularly from Reina Triendl as Mitsuko. Some of the CGI isn’t entirely convincing although on the plus side again, the soundtrack is superb with some stunning post-rock tracks from Japanese band Mono that reminded me of Explosions in the Sky.