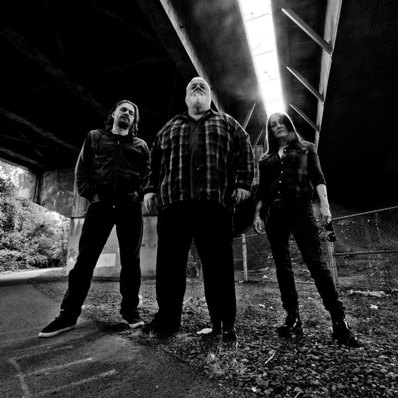 The bellowing trio of Brothers of the Sonic Cloth (Tad Doyle, Peggy Doyle and Dave French) shall embark on their first European tour next month, in support of their astoundingly heavy debut self-titled full-length, released last year through Neurot Recordings. The band shall begin the tour with an exclusive UK show in London, they shall then power through France, Spain, Italy, Switzerland, Austria and Germany, before wrapping it up with a set at this year’s Roadburn Festival, the spiritual home of all things low-end and high-powered.

Brothers of the Sonic Cloth is the sound of earthly decomposition and planetary demise; a slow, entrancing dance towards a looming apocalypse… thick, monolithic, deliberate and devouring. Fronted by Seattle’s legendary guitarist/vocalist Tad Doyle — formerly of TAD and Hog Molly — Brothers of the Sonic Cloth is a trio of longtime rock soldiers that includes veteran bassist Peggy Doyle and drummer Dave French (The Anunnaki). Their full-length 2015 debut maintains a long-held tradition of conjuring some of the heaviest music from the darkest depths of the Pacific Northwest.

Released via Neurot Recordings, Brothers of the Sonic Cloth was captured at Robert Lang Studios and Doyle’s own Witch Ape Studio in Seattle, Washington and mixed by Billy Anderson (Sleep, High On Fire, Melvins et al). Thrusting forth five hauntingly heavy tracks, with two bonus hymns included on the CD edition the offering serves as Doyle’s first recorded release in nearly fifteen years. Brothers of the Sonic Cloth’s audio manifestations are welcomingly unfamiliar, splicing thick, jagged riffs through chilling post-punk drumming and hulking compositions that blow soulfully hot and desolately cold, sometimes within the confines of one track. Their long-form pieces present the kind of mature ideas and expansive progressions that outpace the listener’s short-term memory leading them off the proverbial map; familiar landmarks like sludge, post-metal, rock all but disappeared over the horizon. Authentic and authoritative, Brothers of the Sonic Cloth is as much a persistent thudding body punch of sonic destructive force as it is a thoughtful statement of awareness and the inescapable raw condition of life.

Brothers of the Sonic Cloth