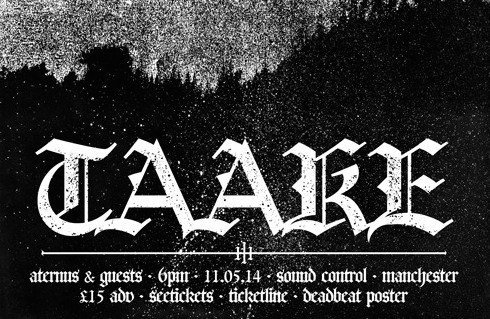 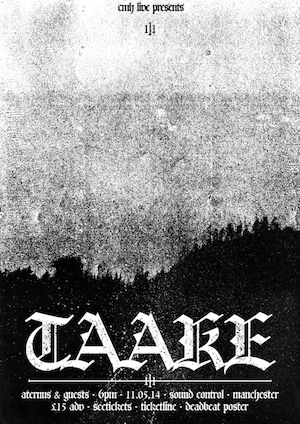 Norwegian black metallers Taake bring their ritualistic pummelling blast beats to a willing crowd in Manchester. Andy Santiago and Dom Walsh were on hand to witness it.

It’s been a while since my last dose of what is known as ‘True Norwegian Black Metal’ and I’ve really been missing it in the live environment, so when one of the true greats of this genre announced a brief run of UK dates, attendance was compulsory.

Taake have been on my list of ‘must see’ bands for many a year but, for whatever reason, I’ve never managed to get to one of their gigs. However, time off work was secured and after a wallet-destroying train ticket to Manchester was bought, I was on my way over to the wrong side of the Pennines to see Taake for the first time.

As it happens, it was an evening of more than one ‘first time’. I hadn’t seen any of the four bands playing before and it was at a venue I’d never previously been to, a small club in the shadow of Oxford Station called Sound Control.

Having checked out the surroundings and found them to be highly satisfactory, it was time for the first of tonight’s bands, Noctem.

Spain is not a country that is brought readily to mind where Black Metal is concerned but this 5 piece had certainly drunk deep from the goblet of Satanic Sangria! With a fully corpse-painted frontman, Noctem delivered a fine set of convincing Blackened Death to an appreciative crowd but there was something strangely familiar about their live performance as I found myself comparing their on stage mannerisms to Watain.

Next up was the first of tonight’s Norwegian bands, Slegest.

The solo project of Ese. Formerly of Black Metal heavyweights, Vried, they betrayed a definite Black Sabbath undercurrent, even to the point of the shaven-headed frontman wearing a Sabbath shirt. The 4 piece hammered through a competent set of doomy riffage with Black Metal influences never too far from the surface. Slegest were well received but I found my attention wandering and just not as captivated as I had been by the previous band.

Also from Norway, Aeturnus formed over 20 years ago and have consistently produced quality Death Metal throughout their lengthy career. As I stood watching, all I could think of was just how much they reminded me of fellow Norwegians, Zyklon.

The precision and brutality of the razor-sharp riffs that combined with the blasts and feral vocals brought a smile to my face and set the head nodding. A good, solid and aggressive set but which, if I’m brutally honest, was a tad overlong.

By now I’ve had more than enough Death Metal and with one eye on the stage and the other on my watch, I eagerly await tonight’s headliner, Taake.

I must explain at this point how we needed to be on the return train at 10:33 so it was going to be inevitable that we would miss some of the headliners’ set. We just didn’t know just how much.

Eventually, after what seemed like an endless stage change over, I saw what I came to see, Taake!

Well, we saw them come on stage, the notorious frontman Hoest concealed in some sort of hooded monk’s robe, dripping in corpse paint and the rest of the band looking like they had just been exhumed.

After about five minutes time was really against us and, grudgingly, we exited the venue. From what little of the set I saw it was clear I was indeed missing something spectacular, but with much dismay, swearing and general discontent, on the train we got.

Luckily, fellow Louder Than War Heavy Metalist and writer Mr Dom Walsh was in attendance with us and at this point, I’ll hand over to him as he saw the whole gig!

Having only treaded the boards a little over a month ago in Manchester fronting Gorgoroth, Hoest was back at Manchester’s excellent Sound Control venue doing the honours with Taake.

Taake are as orthodox as it comes where Black Metal is concerned. They are firmly rooted in their Norwegian lineage in that they sing entirely in Norwegian and all take to the stage decked in corpse paint.

Hoest joined the band sporting a ghostly, hooded cloak which added to the mystique that such great Black Metal bands can create. A true Black Metal show always feels ritualistic, and the way Taake went about their business in Manchester, this felt every inch a ritual.

For the duration of the set the band took advantage of the excellent sound in Sound Control (perhaps a notch against true Black Metal!). Hoest prowled the stage like a hooded creature of the night, the guitars were dense and the blast beats from the back of the stage were pummelling.

Taake really are one of the great Black Metal bands. If you have a list of their contemporaries, they most certainly stand shoulder to shoulder with the likes of Satyricon, Gorgoroth and Enslaved. Taake, more than most, hold their traditions and style true. Their orthodox nature make them a captivating proposition and provide just a glimpse into the reasons why Black Metal has become such a cult.

~
All words by Andy Santiago apart from the bit you’re probably most interested in (the actual review of headliners Taake) which is by Dom Walsh. Their respective author archives are here (Andy’s) and here (Dom’s).