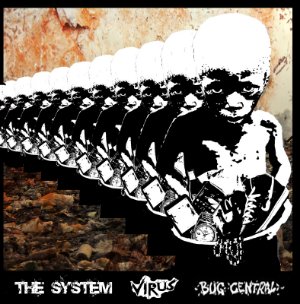 The System, Virus & Bug Central – Split EP (Grow Your Own)

Nathan Brown listens to the latest compilation EP from a Kent DIY anarcho punk label with a controversial choice of artwork.

Grow Your Own started life as a means for releasing material by Kent anarcho punks Anthrax including the excellent “All for the cause” LP.  This EP marks their move into releasing material by other artists, later than planned due to delays caused by Record Store Day clogging up vinyl pressing plants.  The GYO folks have set out to pay special attention to artwork and inserts with more releases in the pipeline including a follow up compilation EP and album.

This release has a really striking package with a somewhat controversial element to it – pop up starving child holding a clutch of gadgets and consumer items which leaps out of the middle of the 8 page booklet.  Yes, I said pop up starving child.  He hovers above a sea of bodies and a quote from Martin Luther King about the inequalities that are inherent in capitalism.  Opinions appear divided: is this a sick and debasing gimmick or is it a means to make sure we can’t ignore the image and its message? People I’ve spoken to, including a member of one of the bands, seem uneasy and unsure how they feel.  I reckon creating that unease causes us to really absorb & think about what the picture means.  A bold move well played.  And if it makes you feel uneasy?  Well, it bloody should. This music is more than just something to tap your toe and nod your head to, conveying a serious message. 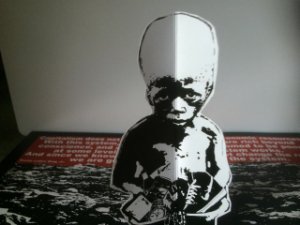 The System originated in the 1970s and their 1982 The Warfare EP on Spiderleg records has been marked out by many as a classic of the anarcho punk genre, not to mention the follow up 7″.   Making plenty of live appearances in recent years, they always had a dirgey, almost depressive, dark quality yet delivered at an upbeat pace.  Their contribution to this EP, Consumerism, is no cryptic message to be deciphered. It does what it says on the tin: rails against the capitalist con that keeps us amused & distracted with shiny stuff while they get on with the business of making war and money.  Recognisable as the same band, those seeking The System of old will not be disappointed.

Virus kick in with a heavy bass line, bashing drums, chunky punky guitar with flanged harmonics and then in comes a brass section. Wow! Kinda poppy but kinda not, for some reason making me think of the Damned.  It works.  Futile continues on the theme of the capitalist system. What really stands out is the way that at each chorus the vocals have a John Lydon (in PiL incarnation) quality, especially with the well placed dose of echo as Dave shouts “Takes control of the economy….conomy….conomy”. The guitar reminds me of them too, now I come to mention it! The more I listen to it, the harder it is to shake PiL from my mind. Following a neat little break across between Sabbath’s War Pigs and the UK Subs’ Emotional Blackmail, the song closes with more brass riffing but this time very ominous.

Bug Central, once staples of the 90s Hackney punk squatter scene, start and end their Four Walls with samples of a news report detailing a case of police brutality. A song about incarceration with artwork to suit. The song veers between a Mob style bass line, early Killing Joke meets Black Flag guitar and an overall sound strangely like ATV.  Or maybe not that strange for a 3 piece springing from the seedy underbelly of London….The tune manages to convey the desperation of being locked up – whether it is literal or metaphor is up to you to decide – and clocks up a mighty 4.43 consequently getting a whole side to itself, although it doesn’t seem that long when listening to it. 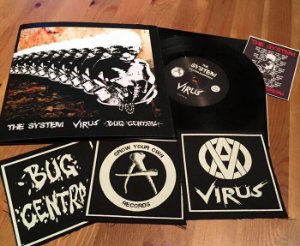 Also available as a CD with a cardslip cover, the first 100 or so of the vinyl release come with patches and stickers.  With what seems to be a resurgence in the popularity of anarcho punk vinyl (possibly by virtue of the core demographic now having disposable income) I predict this will sell quickly so get over to the website and order now to avoid disappointment.

All words by Nathan Brown. You can read more from Nathan on Louder Than War over here.