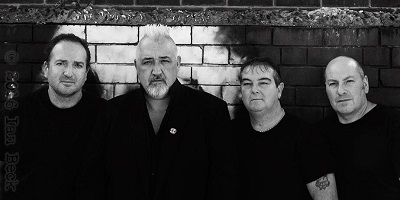 System of Hate is a Dark power Punk rock band from Barnsley, formed in 2011/12 – Sophie Luchinsky interview for Louder Than War.

System of Hate (Dave Sutcliffe – vocals, Shaun ‘Paddy’ O’Neill – bass, Patrick Crawford – guitar, Carl Gulliford – drums) – The band had recorded their first EP the Immortal produced in Barnsley at Nafrosounds in March 2012. The second recording was the Insanity EP produced in Rotherham at Orion Studios with Steve Ellis released in March 2014. The Industrial Remixes of the Insanity EP by Lyndon Scarfe (The Danse Society/ Black Lamps) was released In September 2014. 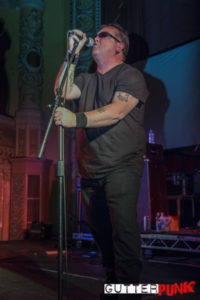 Now System of Hate released their new album ‘There Is No Madness Here’. 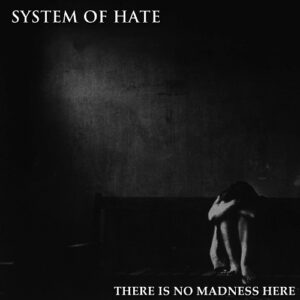 Pat (Patrick Crawford – System of Hate) tells about their music background, their plans for future songs.

Talking about the band’s name Pat says, – “The System is so corrupt, if you are rich, the scales swing in your favour, if you are poor, you will struggle.  Power doesn’t corrupt people, people corrupt power.  We are living in a System Of Hate.”

Telling about his music background and his musical career Pat tells, – “I started as a solo acoustic performer, rising up the ranks to play guitar in the best Punk bands in Barnsley.”

Telling about how System of Hate formed and why they decided to play the genre they do Pat says, – “We formed from the ashes of our singer’s reformed late 70’s Punk band, it had run its course.  Suty, Paddy and myself still had a burning desire to make music together, so started writing.  Paddy kept guiding us towards the darkness, he was right, it was our calling.  Carl came to try out and was a friend for life, from that day.” 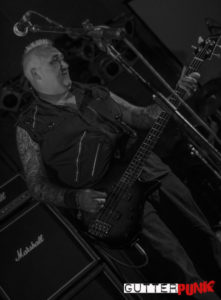 System of Hate is Dark Punk, – “It’s Dark Punk, that’s what we do.  Dark imagery with mad voices,  heavy guitars and thunderous drums.”

“The band formed in 2011/12 although we were still in the previous one, but it was running out of steam.  So we just wrote and rehearsed when there were no gigs, so it took us longer to get a set together for System Of Hate. Suty, Paddy and myself worked really well together, we got on well and we still wanted it.”

“Suty and Paddy have known each other for donkeys years, living streets apart, listening to and watching Punk music. I met them around a decade ago thru the local punk scene.  Carl came to an audition for an old band I was in, he didn’t gel with the bass player but I kept his number, I knew we’d be in a band one day.”, – Pat tells. 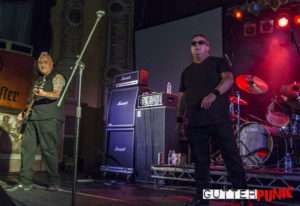 Their music evolved since then. “Massively, if you listen to our early demos to where we are now, it’s a country mile apart.  We really think about the structures, tempos, melodies and always try to improve with each recording.”

System of Hate released their new album (on Louder Than War Records CD | Ltd LP BUY) that is titled “There Is No Madness Here”. “The album is a delusional, psychotic, joyride through the land that is System Of Hate, devoid of hope, full of despair and always with a brutal truth.”

“The album covers the usual System of Hate obsessions; one’s sanity, war, treachery, the death of mankind, blind faith, resurrection, crucifixion, love and much much more.”

Telling about writing their music System of Hate tells, – “The songs can be bashed out in rehearsal from one simple idea, a jam, Paddy or myself may have a verse and chorus and we cobble it together as a band, Paddy and myself also work on songs together at his house and finalise them in rehearsal.  Carl tries lots of different things and sometimes a song’s original idea can take on a whole new turn.  Suty tries lots of different melodies, vocal ideas until we are happy.  The lyrics are written by Suty’s brother and are added once the music is moving, we all get equal writing credits, as we are all part of the magical process.”

Talking about the most definitive songs on the last album and what System of Hate means by them, Pat tells, – “Sanatoria is a very popular song, one where we couldn’t work how to get from the verse to the chorus but we kept at it and wrote one of our best songs, its about Insanity, one of our favourite subjects.  Zealot’s Path has a fantastic saxophone on it courtesy of our good friend Andrew Blower, this addition made us feel very grown up, haha.  Apostle Of Pain another favourite of our fans was another writing turning point I felt, we were no longer a bish, bash, bosh Punk band.  The final defining moment of this album is the title track, simplistic but full of layers, it took us to another level in my humble opinion.”

Influenced by The Pogues, The Pixies, Nick Cave & The Bad Seeds, Tom Waits, The Cramps and many more Pat says, – “I think they are amazing artists and deserve so much more attention. In a World that holds certain poor artists in such high regard, it truly is criminal they aren’t all household names.”

Talking about what’s coming up next for System of Hate Pat says, – “The 2nd album should be available in a few weeks (early October) “There Is No Madness Here”.  It’s been delayed because of the artwork, it should have been ready for this year’s Rebellion but alas wasn’t.  The girls on the merch stall were inundated with requests for it, such a frustrating time.”

“We are currently stood outside the metaphorical labour room, waiting to light our cigars and celebrate the birth of our second album.  There’s been a major mess up and it’s months late. It’s time to call for the Ventouse machine to get the baby out !!!!”

Songs System of Hate performs most frequently are Sanatoria, Your God Is Dead, Parasites In Paradise, There Is No Madness Here, Black Fire, Apostle Of Pain, Resurrected, Unhallowed Ground and System Of Hate.

Up coming gigs of System of Hate are:

“2019, we’ve got Spunk Volcano playing in Barnsley for January, we are in London in February, Heckmondwike in March and Morecambe in May for Nice N Sleazy Festival, with more to be announced.”

All words by Sophie Luchinsky. More writing by Sophie can be found at her Louder Than War Author’s Profile Photos by Tony Ghirardi GutterPunk – Concert Photography