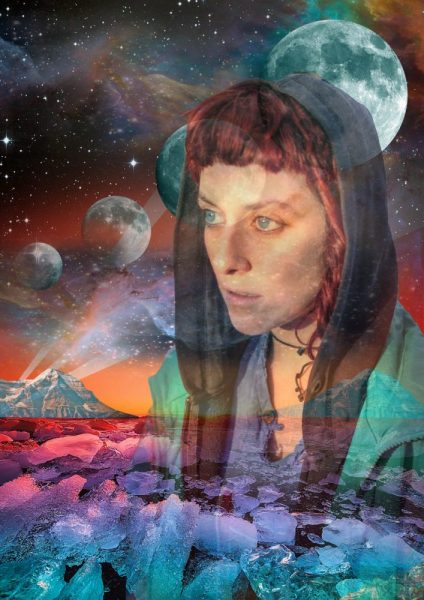 London-based multi-instrumentalist Acre Tarn returns with Wilderness, her first single in a while. Louder Than War’s Dave Beech sat down with her for a chat.

In creating sounds and music that are difficult to categorise, to pigeonhole, bands run the risk of alienating their established fan-base, or worse still, failing to establish that fan-base to begin with. Fortunately for the London-based, Lake District’s Acre Tarn, their esotericism is what makes them so utterly irresistible to begin with.

Having a made a name for themselves through their eclectic electronic arrangements, field recordings and Anna Etherington’s hauntingly hypnotic vocal range, it’s clear that the outfit make the music that they want to make; answering to no-one but impressing everyone.

Latest single Wilderness isn’t a comeback as such, but is the band’s first release in a while, and sees familiar tropes tightened and honed, resulting in a richly nuanced and utterly beguiling single that asserts Acre Tarn as one of the UK’s most interesting, and indeed exciting, bands. We caught up with Anna and asked her to answer a few questions:

Hey Anna, thanks for answering my questions. How’s it going?

It’s been a good couple of years since we last caught up. What’s been happening with Acre Tarn in that time?

I’ve been writing and reworking my sound a lot, moving to London and meeting new producers/collaborators has been inspiring and I wanted to step up my sound a little. I’ve been under new influences and that has driven new material. It’s going to be a while before any of that comes to the surface, but I want to make that worthwhile and make it count. I’m not in a hurry to throw out just anything.

Your music’s always felt quite ambitious…elaborate even, without being over the top. In what sense are you planning to ‘step up’ your sound?

Using some new synths, samples and more field recordings from the places I’ve been, a lot of the work has been improving my production skills and using that when writing… working on the song comes first, spending more time with lyrics but overthinking less… enjoying it all more and being confident in the decisions you make is 80% after that.

You recently took some time off from the band. Has that allowed you to come back with a new sense of vigour or a new perspective?

Taking time off just meant recording and writing and not being as present on social media. I’ve been writing and making nearly every day, recording with people and doing some cowrites and top lining too. It’s been really refreshing, and I definitely feel less musical anxiety and a lot more comfortable in what I’m creating.

More than that though I went to Asia recently (gap yah yeah?) and that changed everything for me. I’ve reconciled a lot with new subject matter for songs, and have been a lot more open to writing about someone else and their journey, escaping from that narcissism that I think a lot of musicians take on can be the happiest adventure.

Surroundings and environment have always been a big influence in your work, the Lake District in particular. Are we likely to see Asian influence appear in your music in a similar manner, or was its influence on you more subtle?

I wasn’t in Asia for long enough for it to infiltrate me in a musical sense, plus I don’t feel a cultural ownership that justifies me attempting to recreate what I heard there, my influence from the lake district comes from feeling at home in that wilderness and that is always something I will carry with me first and foremost. The inspiration I felt from my trip was from the people I met and their stories, the music was wonderful and fascinating and do have some samples that could feed into my own music, but more subconsciously.

You’ve just released Wilderness, your first single in a while, is their a narrative or story behind the track?

It’s spawned from a break up (classic) but is actually about the confusion between lust and love. A lot of sexual chemistry can cloud the logic of what a person really means and how that can cause emotional turmoil and implosion. Then the cloud lifts and you see yourself in a different light.

As we quickly approach 2018, what can we expect from Acre Tarn as we go in to the new year and beyond?

New music, collaborations and much more self-gratification with how i write and produce. Maybe less coffee.

Acre Tarn can be found online here: acretarn.co.uk. They’re also on Facebook and they tweet as @AcreTarn.