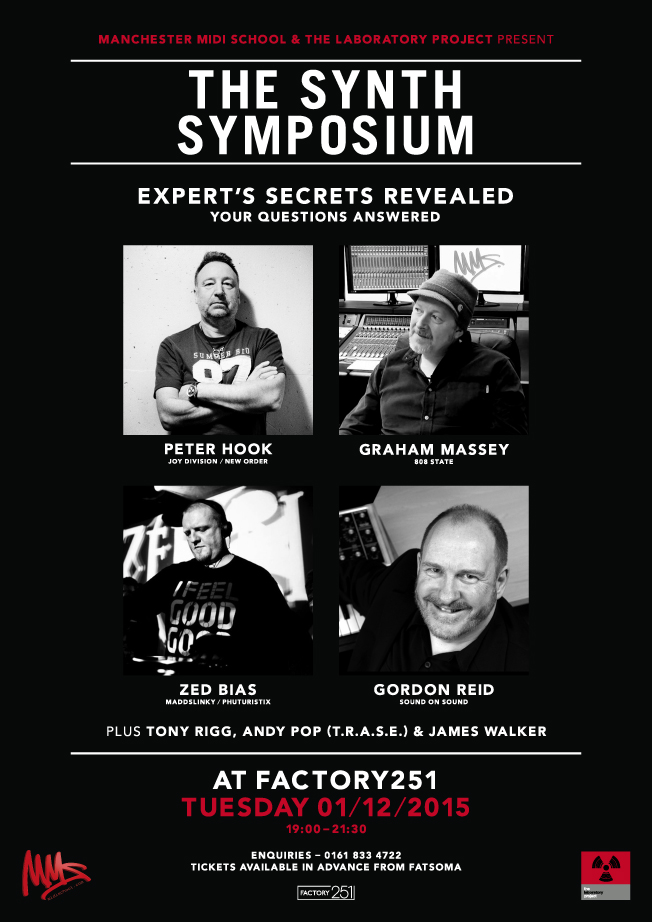 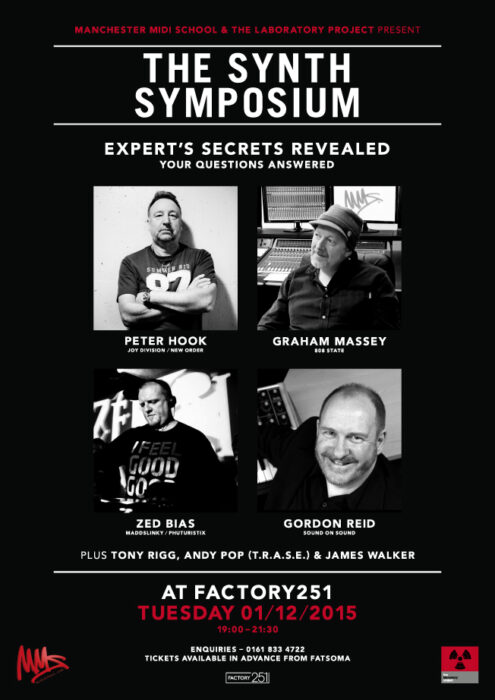 Almost perfectly Peter Hook’s Factory venue is the host of a fascinating debate about the synth. The venue which sits inside the old building for the Factory label which built its reputation for peering into the future hosted a great debate dealing with these still quite mysterious small boxes that create such big and perfect sounds.

The panel of 808 State’s Graeme Massey, Peter Hook, Dave Jones – AKA Zd Bias Maddslinkey who is a widely respected pioneer in underground dance music and Gordon Reid – renowned synth expert and author of ‘Synth Secrets’ skilfully and entertainingly dealt with all the nuances of the mystery of sound.

Put on by Manchester Midi School and the Lab Project Org who re launching a series of these great events this was the first of a fascinating series of insights into music making.

The synth has been with us for decades now helping to create some of the greatest records of our lives and yet it still feels all shiny and new.

Of course music like this has a long history. It’s a history that stretches back further than pop culture itself. There was the great Delia Derbyshire and the BBC Radiophonic Workshop – for many the theme to Dr. Who was already mind blowing in its ground breaking yet captivating futuristic weirdness. It was a piece of throbbing oddness that must have been a profound yet almost unnoticed influence on young minds through the sixties and seventies where it was just another great TV theme tune yet one that was created in a revolutionary way. It was just one of the great pieces of sound carved up mainly by Delia Derbyshire who has finally started to get the praise she deserves.

Initially the synth and its small box like relatives attached to keyboards entered pop culture in the sixties when it was treated as some kind of new fangled bolt on to trad guitar and bass drums combos. For a brief period it was the futuristic toy for the idle rock star. The Beatles messed around with moogs and meletrons and other pop bands became entranced by these new fangled noise boxes.

For me personally the synth arrived with that iconic Tomorrows World in 1975 when Kraftwerk appeared playing Autobahn. It was a moment that, on pop culture terms, was as important as the New York Dolls were appearing on the Old Grey Whistle test. For a start they were appearing on a science programme and not a pop show and their robotic performance stood stark and angular and devoid of the sweat and grind of rock and yet as full of emotion and machine funk and their keyboards was mesmerising.

Perhaps 1975 was the year that synth broke – of course there had been many precursors from before with even glam loons like Chicory Tip hitting number one with Son Of My Father but it was Kraftwerk who were far cooler and a break away from the phallic guitar lookalikes to something else. Something still futuristic.

Bowie was talking about them and a new era was blinking in the sunlight. By the time former Chicory Tip producer Giorgio Moroder was on the case in 1975 with Donna Summer’s Love to Love You Baby and then the iconic 1977 I Feel Love the future and arrived as Bowie himself pointed out ‘One day in Berlin … Eno came running in and said, “I have heard the sound of the future.” … he puts on “I Feel Love,” by Donna Summer … He said, “This is it, look no further. This single is going to change the sound of club music for the next fifteen years.” Which was more or less right.’

The vintage panel who, it must be said, have worn far better than the old keyboards that lay strewn across the garden sheds of gear news across the world, were perfect for discussing this dawning of this new era with its circuit boards and kits for building drum machines and esoteric synths that broke down all the time but made magical sounds. What was once futuristic is now antique and the stage was surrounded by creaking old keyboards with wires sticking out of them – it wa s a fascinating collision between the future and the past and full of admiration for pioneers.

The conversation flowed around the history of the form and honoured pioneers as diverse as Kraftwerk, Gary Numan, John Foxx, and Hawkwind and their underrated Space Ritual and even the Enid before a nod to the amazing genius of Delia Derbyshire from the seventies when music started to shape shift from guitar, bass and drums and sometimes keyboards to the new tech age. There was talk from Graeme Massey of the boundary breaking resoluteness of Miles Davis and the perfection of Weather Report in a bumpy and fascinating ride that combined the personal experiences of the panel with the encroaching new age.

These are players with long roots – peter Hook was of course part of New Order who combined post punk with the mechanical dance floor and broke boundaries and opened doors and Graem Massey’s 808 State further explored these new vistas other panellists ranged from playing prog rock to making their own drum machine at school.

Graeme Massey’s talked of the DIY approach to the plethora of keyboards that were starting to arrive in Manchester in the mid eighties and the primitive experiments that were going on with them. Strange sounding names on boxes that appeared in West Didsbury flats and attempts to make music from them. At the same time Peter Hook and his bandmates in New Order were battling with the new tech as they forged forward from Joy Division still following the lines set in place by the vision of the late Ian Curtis and especially the genius of Martin Hannet who as Hook noted was mesmerising to watch in the studio ‘We wouldn’t even have a clue what he was put to sometimes but it sounded amazing – the same with Barney in New Order a few years later – I couldn’t work out of he was genius or just blagging it – I’m still not sure now!’ he warmly recalls of his estranged former band mate the day after the court case was announced.

Hannet was the in house genius in Manchester who was forever dreaming up futuristic sounds and trying to create the equipment to make them. His legacy is of course the Joy Division sound which Peter Hook points out was different in the studio than live and this idea of playing the studio and having a film makers appraoch to music writing instead the trad blokes in a rehearsal room bashing it out system was key to the new era. Blue Monday was the pinnacle of this fusion and Peter Hook discuss its creation and the way the bars didn’t match but it just felt right but its intricate nature took months to create.

Hooky, was, as ever great value, as he told the story of how the synths would always break on stage even when they had five of them and how Barney would label the leads with blue and green labels to work out which way round they went into the synths but no-one could see them in the murk of the stages so out of (now) order came chaos but that is always the way of the pioneer.

Graeme Massey, though perhaps, provided the words of wisdom. Those years spent tinkering round under piles of wire and smouldering keyboards in the days of Spirit studios were pioneering ones. He went from the avante art fusion of Biting Tongues to the only guy in town who could create the beats for young rappers just before acid house and then became the frontline house music tech guy in town. He recalled those days and the battles to make the sound work and later on recalled meeting the people who had designed and built 808 States favourite Yamaha keyboards and being shocked that they were not music people in any way at all and are Japanese experts in technology.

The self deprecating Massey pointed out that he could still only play the synth with one finger but the input didn’t matter and it was the vision that counted whilst Hooky pointed out that you still had to write a song to make sense of the machine and that ‘songwriting is a mysterious art’. Massey then spent a fascinating section of the evening deconstructing a track – showing how it was layers and layers of sound and ideas that were then edited and stripped own to somehow carve perfection from the sound.

The best question of the evening came the floor asking if there was regional flavour to the electronic sound emanating out of Manchester over the years. Interesting when you consider the the plethora of keyboards from the Junos to the Yamaha to the Prophets are all intentional and functional boxes but the beauty of the whole things is the way that the varied players who ranged from DIY one fingered visionaries to keyboard wizards all took these cold hard wires and bleeps and knobs and made them sound so different adding their own warmth and personality to the robots.

And that surely is the real genius to o this story.