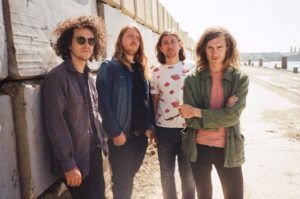 Formed out of the forest party rave scene in their home county and with a hard-won DIY self-sufficiency, Syd Arthur developed a sound and approach miles beyond their indie peers. With swirling psychedelic textures, guitar-based trance with a funk groove, Syd Arthur were lucky enough to tour with the likes of White Denim and The Strokes. Syd Arthur’s third album Apricity is on the Communion label with Beck’s guitarist Jason Falkner in the producer’s seat.

‘Into Eternity’ is the lead track of this LP. It starts with a quiet piano intro that progresses into a beautiful measured vocal that meanders and culminates with the refrain “breaking out, into eternity”. This genteel feeling to the track morphs into some really nice jazzy elements that don’t stick to the ‘usual’ time signatures. And it’s these elements, as well as the Bjork esque vocals, that give Syd Arthur a powerful feel.

Three quarters into the track and you have some nice frenetic jazz guitar noodling that carries on right to the end of the track. Nice.

The overall feeling one gets from Syd Arthur’s latest track is that is really nice easy listening. The mixture of the gentle piano, subtle vocals and the jazzy guitar really mix well take this track to another plane.

You can find Syd Arthur on their Facebook, Soundcloud and he tweets as @sydarthurband.