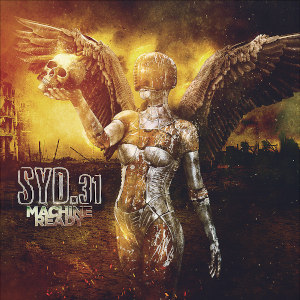 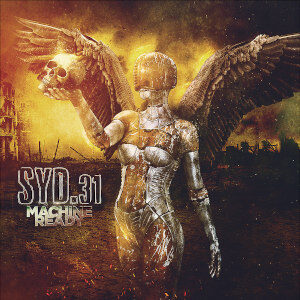 The latest album from punk meets industrial entity Syd.31 knits together a horror film vibe with a raw guitar attack that is a homage to Discharge.  Review by Nathan Brown.

This album starts with an Intro (A Night Visitor) which is pretty much the sound of your bedroom being scanned by bright alien lights a la X-Files. And the Outro (A Visitor Departs) provides the end credits! The vision of extraterrestrials disappearing from sight. In between you have songs about near-death experiences/bad life choices, people’s mental health deteriorating before your eyes, bullying and friends who won’t help you when you need them most. So not a bag of laughs!

The title track Machine Ready is one of the more overtly political songs, focusing on the damage social media algorithms cause set to the sound of a foundry or a forge pumping out huge lumps of metal. And what happens when that algorithm payload is aboard drones in the not so distant future? Dystopia! As if to punctuate the point of damage social media can cause, disgust at the rise of the far-right under Trump inspired the following song.

The video for Machine Ready is pretty impressive, looking more like something from a fancy pants major label than the DIY effort it actually is. It’s got all the key ingredients. Those are real flames, not effects, by the way.

There is also a true ghost story, about a malevolent presence our host for this audio journey witnessed as a youngster.

This subject matter feels particularly fitting as there is something otherworldly at work throughout the album. Before reading about the malevolent figure I had already decided the album was like a horror film. The menace of Hellraiser when it’s more subdued, the music to which you’d drive your all-terrain vehicle across a radio-active wasteland when it gets upbeat.

In keeping with this feel, vocals for the most part pitch at the demonic somewhere between Amebix, Venom and Swamp Terrorists. Occasionally they drop to a less gravelly timbre with something of a NIN feel.

Musically the strength of this album is where it emulates the punk end of the early 90s industrial scene – bands like Ministry, Swamp Terrorists etc. While the sound is drum machine and drum loop driven, the star of the show is the songs featuring a relentless guitar that draws from Discharge. On Demon Night the truck-mounted guitarists from Mad Max Fury Road are made real.

Syd.31 is no one-trick pony. On We Turned The Lights Out a melodic start with film soundtrack fx and loping beat drops into something that draws on dub reggae’s bass and drum patterns – albeit with shouting over the top! Imminent Failure also has a film soundtrack feel to it with choral sounds, a chilled-out vibe and a phaser powered bass line that is pure Joy Division.

Techno space effects, ambient midsections and a touch of a dubstep vibe also slither their way into the mix alongside Prodigy beats, but it is the big riffs which mark this album out.

This is a solo effort with all instruments and vocals were performed by Dr Magic, the human face behind Syd.31, unable to collaborate with others due to the pandemic.

Available from Bandcamp. iTunes, Spotify and all usual digital distributors.