We could pretend that we already know everything about every band appearing at this years Sŵn festival in Cardiff, copy & paste some press releases, nip off to the football and stay in the pub for the rest of the evening.

Or we can get Keith Goldhanger to plough through over sixty bands and comment on what he feels may be worth a look.

Some of us are digging into this event already and some of these bands on the Sŵn 2018 poster are being digested an an alarming rate. Cardiff is where some of us venture in from the east because during this four day event (Oct 17th – 20th) we expect we will find ourselves standing in a room (any one of 16 available over the four days) watching bands everyone else there knows more about than we do.

If we had ten minutes we’d simply tell you all about the bands we already know and have probably written about already. Dream Wife, Drenge, LA Salami, The Go! Team, Martha, Gaz Coombes, Bo Ningen, Boy Azooga, The Blinders ….but we’ve got more than ten minutes so we’ll plough through everything and highlight some bands at least one of us around here has already started getting warm under the collar about. To avoid any bias these tunes were compiled then listened to a few times without any track listing in order to merge the unknown with the already familiar. Bands such as Dream Wife and The Go! Team are rather distinguishable as some of us are on a regular diet of these bands already, however there were others that made the ears twitch and as the number of previously unseen bands we wish to catch begin to increase daily we already know we’ll probably return home at the end of Sŵn 2018 disappointed we didn’t catch everything we wanted to.

You may already know about many of these. Not all of us do but we believe we may have a lot to say in the aftermath.

Can we keep this down to just five bands ?
Probably not.
Here’s as close as we could get to mentioning some of the music we look forward to seeing without simply writing a list and chucking up a sixty six band play list.

Although the playlist does get thrown in at the end if you want to trawl through it and find something we may have overlooked (or even omitted).

Gwenno will be appearing at the city’s Tramshed venue on the opening night (Wednesday 17th October ). Adwaith and Halo Maud are two other acts on the the same evening. All three sound ace.

From Leeds and already with numerous shows under their belts covering not just the UK but overseas. Begs the question, what have we been doing to have not come across this band until now ?

The relationship with this one man band began with this tune and lead us to an album that Louder Than War reviewed at the end of last year. The album’s been listened to and for some of us we feel it may be time to see this live.

More Welsh pop, driven by Greta’s powerful voice and twisting tunes that were probably played to death in the past on just the one acoustic its imagined. Another back catalogue delved into this month and another performer we’ll be attempting to catch for the first time.

Brighton, loud guitars, passionate tunes we haven’t heard since Hope of the States, Explosions in the Sky or Sigur Ros. A band that could release instrumentals of their tracks and still be wonderful. If not seen during Sŵn then they definitely need to be seen at a later date.

Other bands to be taken into consideration are;

LOW ISLAND  – Oxford four piece with foot taping, body swaying , atmospheric dance tunes that are probably created by drinking the same water as one or two other bands from this town. A band with an impressive bunch of songs already available that cause us to feel bad we haven’t crossed paths already.

DRENGE – We’ve seen these a few time before, the last time was at this same event when they turned up late and played in their pyjamas. New tunes from their new ep out this month and whispers of a third member have us intrigued to visit these boys for another feast of fabulous tunes they always seem to provide us with on every visit.

GREAT NEWS – Norwegian trio with tunes that make us dream of Tame Impala and had us scrambling for that War on Drugs album that’s been neglected at the back of the record box (Lesson for you all – alphabetically ordered albums are a disadvantage. Proof – The success of Abba).

VIVE LA VOID –  Sanae Yamada from Moon Duo has a bunch of tunes we expect we’ll become slightly obsessed with by the end of the year. The eponymous  titled album has already been spinning around the house since we first heard this and we hope to have a closer look during day three of our stay.

SUUNS – A second viewing for at least one of us may be on the cards. We were tired, fed up with the cold weather and had ear ache when they played at the Scala in London. This track is as fab as all the others and it’s as close as you’ll get to hearing anything that sounds remotely like the Residents in 2018.

ACCÜ – Dreamy synth based odd bod sweet electro pop music that may even include a flute. Difficult to find out much about. Is she Welsh ? Dutch ? Both ? Is she making music that reminds us of The Slits with synths not guitars ? Or are there guitars as well as synths ? This kids is what we had to think about before the internet was invented (however in those days by the time the bands we loved arrived in London we’d forgotten all about them).
Accü have had most of their back catalogue listened to since deciding to only listen to Sŵn Festival bands this month (And the radio, Anna Calvi, that bloke from the Strokes and a crazy song by some unpronounceable Japanese band).

GAZ COOMBES –  A great example of how one should grow up and become old as a musician. Bang out Alright at Butlins for some beer money during an annual end of season knees up for those that don’t seem to going out as much as they used to or plough on and keep churning out more varied and interesting albums that some of us want to hear more of than the old stuff.  Moving at Standon Calling was a fabulous moment so was Deep Pockets and Walk The Walk. A Gaz Coombes show in 2018 is a greatest hits set already.

We’ll stop there. We could go on about FLING, DEAD METHOD, LOW ANTHEM, GREY HAIRS, GIANT PARTY, NIGHT FLIGHT       …all new names to some of us but all with a decent collection of tunes already under their collective belts. 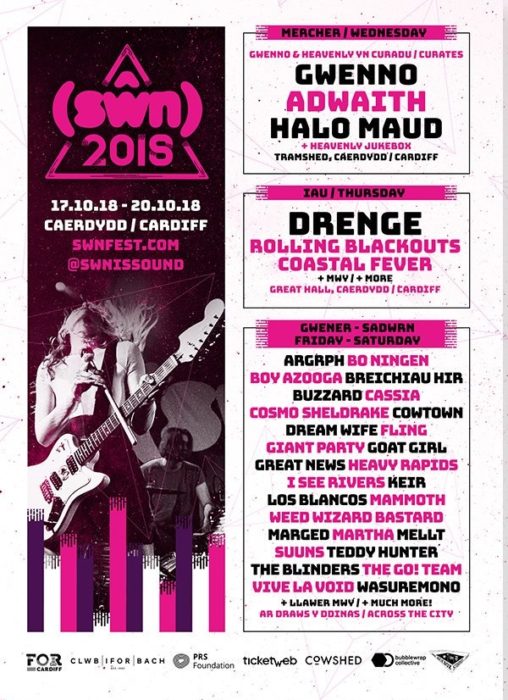 This is the festival that we love for introducing us to some of the bands on the ascendancy that we may have previously been missing out on. Bands that are achieving the same as the ones we love back in our own little world in the East of this little island.

This is a Festival with a history of bands that eventually became household names (OK, slight exaggeration),  appeared on the very few music based TV shows we’re all allowed to watch and have various product that now sit comfortably with our ever growing music collection either on our laptops, CD racks or record boxes.

It’ll probably be one of the bands not mentioned so far that will win our hearts. You can never tell.

Tickets and all other information available here.

Here’s the whole playlist. 66 BANDS . Pick your own, become obsessed and go west at someone once sung.