Keith Goldhanger reports from Cardiff where over a three day period he got to witness nearly a third of the 130 bands appearing as part of the annual Sŵn Festival. In Part one he reports from the only venue hosting bands on the opening day (Parts Two and Three will follow).

Browsing through the Sŵn Festival web site as one man has been recently leading up to this weekend we can only recommend about 15 bands out of the 130 playing in Cardiff over the three days we’re in town. That’s a big enough number to get us here however even though the preview (https://louderthanwar.com/swn-festival-2016-cardiff-preview/) was an indication of the bands that we already know and love we feel these may be avoided to allow others to stand in our place. It’s the search for the new that brings some of us here. The trust we have in the people that put all of this together and the knowledge we’ve gained recently by hitting the play button on the previously unseen bands’ soundcloud accounts.

It won’t work like that of course, everyone knows that after a couple of pints it’ll be the familiar faces and tunes that at least one hypocrite will be drawn towards again but we don’t expect to be disappointed and we expect we’ll leave here after three days with a lot to keep us going for a few months and maybe even for a few years as well.

This is our third visit.

We’ve made half a dozen different schedules for the weekend yet we’ll still manage to get persuaded to go elsewhere at the last minute leaving the nagging feeling, as is compulsory during events such as this that there’s a few more bands that have not yet been seen by the eyes even though the sounds from the speakers leading up to this festival have been very agreeable.

This is the world we live in nowadays. Loads of good bands, loads of people keen on telling each other about the ones they like and the trust we sometimes take for granted that what we’re being told is for our own good.

There’ll be disappointments for sure. These will be mainly the ones concerning the bands we’ve missed and hope to see another day. The bands that appear a bit rubbish we’ll give ten minutes before walking over the road or up a short flight of stairs to look at something else (a bit like the system we used when we all got taken to Colchester Zoo as eight year olds).

Spring King were a definite band to see before we left London. They pulled out before we’d even checked into our humble dwellings.

Sŵn simply replaced them with two bands that were equally both fantastic.

Day one, or Friday as the rest of the world know it as should be a doddle. Five bands in one venue. We’ll see everything without having to concern ourselves about what may be going on elsewhere.

CROWS -(https://www.facebook.com/crowsband) from London were on top form again. Mid paced noisy and heavy (think Killing Joke) guitar music fronted by James Cox utilising his two microphones and having a little stroll around the audience giving those punters keen enough to get to The Tramshed early a good start to the weekend. It was mentioned previously that Crows performance works just as well on large stages as it does on the smaller ones we’ve seen them on back home in East London. They look like a gang of blokes that eat, drink and listen to (the same) music together which we debate later may not be the same as PUMOROSA  – (https://www.facebook.com/pumarosamusic) who probably all listen to loads of music but possibly individually. Pumorosa are good enough to get the bones shaking and toes wriggling but we feel we’re simply dancing to the rhythm not the songs. We retreat to the bar with a distinct lack of a catchy verse or chorus embedded in our heads to get excited about.

THE SANDINISTAS  – (https://www.facebook.com/TheSandinistas), an addition to the evening were off to a bad start before a song was even heard. This wasn’t their fault at all. Some of us gave up on The Clash (what else would have influenced their decision to call themselves this?) after the first album so the introductory gig for us
Sandinistas virgins was going to start on a predictable wrong footing. They soon won us over and oh boy do they have the songs, and as banging tune after banging tune came and went before we could catch our breath and accuse those next to us of applauding another Welsh band that sounded like the Manics it became clear that it would be difficult describing this trio without coming across like a patronising Simon Cowell. This could be a bad thing for one or two of us but it’s a big world out there and those of us who often turn away from these things are usually in a minority whether we like it or not. People will love this band as soon as they hear the debut single ‘Ready to Blow’ – It’s a cracker and we were given an indication tonight that this may not even be a one off. The first band we’ve seen so far that we’d never heard of before and already some of us will be keeping an eye on them in the hope we can pay them at least a second visit one day (possibly over the weekend but the chances are we’ll be elsewhere in the city).

The same can be said for ESTRONS  (https://www.facebook.com/Estrons) ‘Make Like a Man’ single that we heard  before leaving the house. This female fronted rock (with a small r) band were simply exhausting to watch and gave us some indication that they have a good collection of decent tunes for us to get to grips with – These are also worth another look sometime and tomorrow may be the next opportunity (it wasn’t, we were elsewhere in the city watching someone else at the time).

What we saw in the Tramshed at the end of day one  was simply astonishing. Meilyr Jones – pic below – (https://www.facebook.com/meilyrjonesmusic),  a new name to these ears opened the proceedings with ‘How to recognise a work of art’, a song that sounds like Morrissey singing with Dexy’s.

We get trumpets, violins, loud bits, quiet bits, a big Bowie sample and snippets of lyrics we can’t wait to sing along to one day fronted by a man who we will be falling over to see again as soon as we can get these tunes we’ve been watching him perform into our lives. One or two amongst the big crowd already look more than smitten. One or two of us feel slightly left behind having only just discovered this man but this is why we’re here, this is why events such as Sŵn are a joy for those of us trying to drink in as much as we can that’s available in this massive musical world we are fortunate to inhabit in the 21st century. There was a time that nights such as these would be followed by a visit to the nearest record shop a day or maybe a week later. Merilyr Jones was the sound track as we woke up the following day. Technology eh? – Kids today don’t know they’re born. 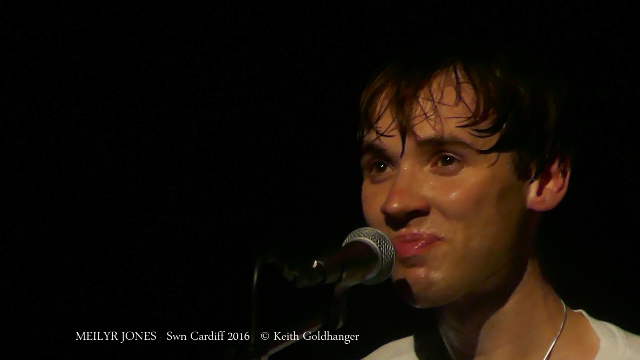 A show as sublime as this needs to have the audience on his side for all of this to work perfect though. We’re sure that during shows that people have committed themselves exclusively to he gets the respect he deserves. As he stumbled through a very quiet final song he simply gave up, shrugged and pointed out an individual who seemed to think his own loud conversation was more important than what the rest of the room wanted to hear. As a short two way in conversation ensued between himself and probably the hardest looking bloke in the audience it was refreshing albeit a little late to bring this to the rooms attention. A couple of songs tonight were even sung off mike, most of it worked, there was far too much ‘shushing’ going on during the set but this was so fab it didn’t really matter enough to spoil the show. Meilyr Jones will get the respect that he deserves, that much one can work out simply by the introductory hour witnessed by those seeing this performance for the first time. The second time will be even better one expects. One or two of us can’t wait for this already.

A stroll in the park they say – or to be precise, The Tramshed. A great venue and employers of lovable burly bounces engaging in conversation and shaking everyone’s hands as we left thanking us for coming and wishing us well on our way.

What a lovely way to end the evening.

What a brilliant start to the tenth year of Sŵn .