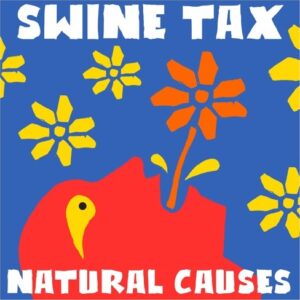 Louder Than War’s Ioan Humphreys reviews the latest track from one of his new favourite bands.

I’m a big fan of Swine Tax having reviewed their last release here. Natural Causes is their latest release and it’s an absolute trial in barking spoken vocals, noise and aggression. Nice!

An Immediate and frenetic guitar riff starts this noisy and angry release. Vince Isles’ mixture of spoken word and vocals are what drive the first half of the 4.48 of this intense racket. Singing about Netflix subscriptions and the refrain of “I’ll smash his face in, the murderous scum! Action!” This band are not fucking around anymore. With audio from an American 1950s Sci-fi radio drama making up the start of the final third, I really love Swine Tax’s openness to experimentation. This is of course before being engulfed by noise, feedback and a deliciously elongated distortion finale.

Recorded, mixed & mastered by Chris McManus at the brilliant Blank Studios, Natural Causes is a seriously good follow up track from a promising band that have deservedly continued to gain fans and followers since their inception. This latest release perfectly showcases their talent for song writing, their social consciousness and their ability to mix all this up into a deliciously listenable racket. Put Swine Tax on your radar. You won’t be disappointed.