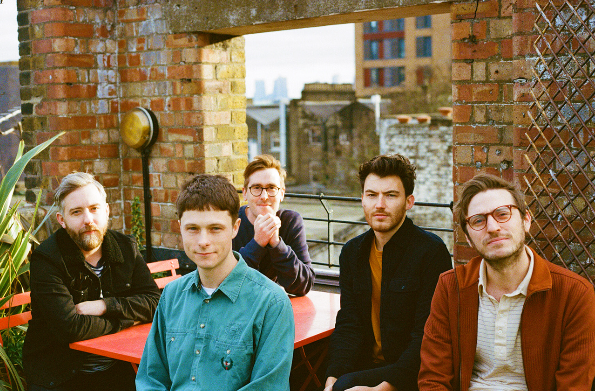 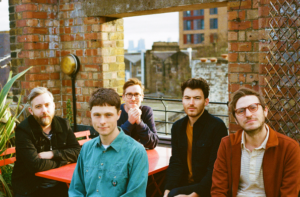 Swimming Tapes are those masters of Byrds descending guitar riffs who recently announced their debut album Morningside set for release on Hand In Hive records on 24th May 2019. Matt Mead caught up with a couple of the members of the band for Louder Than War on the eve of their new single, and opening track from the album Passing Ships, being released.

(Andrew:) Yeah there was definitely a pretty solid plan in place before we recorded. It basically all came down to money. Even though we were very lucky and got a small grant from the PRS Momentum Fund, we really didn’t have very much money to make this record, so we knew from the get go that we wouldn’t have the time in the studio to spend 2 days getting the right snare drum sound or figuring out the best arrangement for this song or that song. So before heading to the studio we worked really hard on getting the songs totally finished, pretty meticulously. We knew pretty much every note, every bar, every guitar sound that we’d be going for on each track and did a couple of pre-production sessions with Paddy Baird too.

Were you able to choose the studio you recorded in? Why did you choose that one?

Yeah we were. We recorded the album at Musicland in London, a small studio that we recorded our first EP in. Our friend and producer Paddy Baird works out of that studio and it’s a nice space. Not too big but also not super cramped. We hunkered down there. I think because we had very little time to go in and actually make it, the idea of using a place we were familiar with was really appealing. Sometimes you can go into a new studio and it takes a few days to sort of acclimatise, figure out where the amps have to go to get the best sound, which room to do drums in etc. We really didn’t have the time to figure that stuff out. There is also a great pub literally 30 yards from the front door, but unfortunately that’s now closed down and becoming flats.

How long did the album take to record?

We tracked the album in eight-and-a-half days. That was split across three pretty intense back-to-back weekends, Friday to Sunday. We all took a few Friday’s off work. It was also winter time, so we would start on a Friday morning and pretty much not see daylight until Monday morning, then a few days out of the studio living life, then back to it on Friday again. Lots of very early morning and very late night buses home in the freezing cold.

Are the songs a mixture of band efforts and compositions by individuals members?

Not really. I wouldn’t say there are any Swimming Tapes songs that feel like, for example, Robbie’s song or Lou’s song or Paddy’s song. That’s not really the way we write. It’s very democratic. No-one is super precious over their own part. Of course each song will start with an idea that will usually come from one person, but then it sort of gets totally taken off and turns into something else when all five people start bringing their ideas to the table.

From the opening bars of Passing Ships each track has a similar feel to the singles that have preceded the album? What is it about the descending chord riffs that you have perfected throughout your material so far?

(Louis:) I think it’s just what floats our boat really. We like those kind of chord progressions and haven’t really got sick of them yet. From the start of this project we always wanted to have cohesion between songs and sound of the band and not just change things for the sake of it. We have written lots of things with different kinds of progressions and generally come to the conclusion that it doesn’t sound like a ‘swimming tapes’ song.

Are there any particular favourite songs on the album?

One of my favourites is ‘Say it isn’t so’, just because it shows a slightly different side to us with it’s slow building intro. I’m proud of all the songs on the record to be honest, each one has its own little charm. ‘Silhouette’ puts me in a nice place and I’m looking forward to get ‘Passing ships’ out there and seeing what people make of it.

Do you foresee a change in musical direction at some stage?

Yeah I think it’s important to develop. We’ll probably always write pop songs on guitar, but until this point we’ve only used guitars and drums on record, so there’s probably room to add another instrument somewhere.

You are going out on your first national tour soon, are you looking forward to visiting any places in particular?

We actually did our first headline tour in November last year but this one will take us to a lot of new cities we haven’t visited before which is exciting and nerve racking in equal measure. Hopefully some peeps actually turn up. We’re heading over the water to play Dublin which will be really fun, it’s such a great city and I’m looking forward to indulging in a fair few Guinnie (plural for Guinness in my mind) while we’re there. No Northern Ireland show on there which is sad but we have something good up our sleeves for there later in the year.

Last question: What’s on your turntable at present?

(Robbie:) Glancing at the record player I see Breathe Panel’s album which I love. They happen to be supporting us on our upcoming tour and I’m looking forward to seeing them play every night.

Article by Matt Mead. Further articles by Matt can be found via the Louder Than War author archive pages