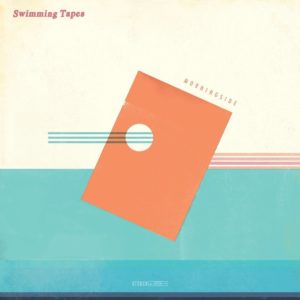 The highly anticipated debut album by Swimming Tapes released via Hand In Hive Records has been found washed up on a tide of plaudits and fanfare. Matt Mead takes a dive into the deep end to review for Louder Than War.

Swimming Tapes are the London based 5 piece guitar band who have a certain sprinkling of magic settling all around their poolside. Having teased their audience with 2 stunningly original EP’s they are now ready to wrestle control away from their rivals with a debut album full of blissfully pinpoint Bryds type guitar riffs, elasticated bass lines and a back beat straight out of the Orange Juice Rip It Up period. This is engaging music for young romantics if I ever heard it.

Starting off with the delicately whimsical Passing Ships. Up close and personal singing is a trait featured throughout the set from vocalist Louis and Robbie sounding like the sons of Roddy Frame and Paddy McAloon. Romantic daydream lyrics help to even out the sun cream lotion to glistening success.

Haircut 100 would be proud of the multi-coloured swap shop of Keep Her Close and Say It Isn’t So. Shimmering guitar riffs feature heavily across the album, which has become a trait of the band material so far. Is that a bad thing? Absolutely not! The band have mastered this art just like the likes of Lennon and McCartney mastered the descending chords on Help! and Dear Prudence.

It Gets Old might be harking to days growing up with your first love who isn’t around when you press that door bell. We all know that heart-breaking moment, but to have it documented by music is sweeter than a Sherbet dip. That analogy probably sums up this collection as sweet, summertime pop driven by those classic components of vocals, guitar, bass and drums. What more do you need?

A solid debut from a young upcoming band. I’m intrigued to see the path Swimming Tapes take next after these releases which are full of the joys of life, documented by sunshine, shade and cool breeze. Personally I hope we don’t see a tidal wave of change, as this collection is a refreshing collection of perfect guitar pop.

The band have also announced a national tour taking in the following cities: