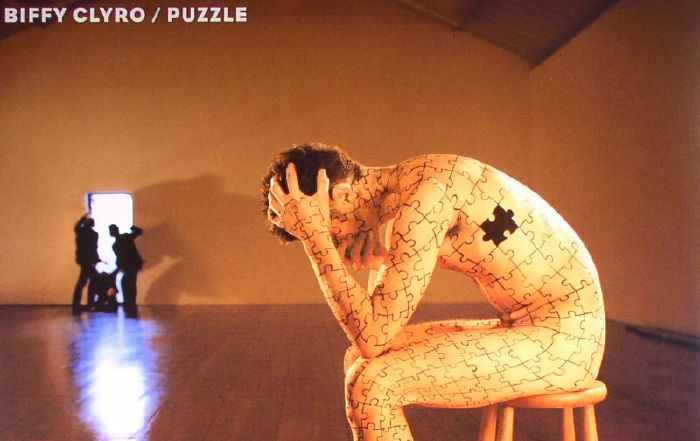 Some of alternative rock’s most prestigious bands can splinter their career into two categories – pre and post-adulation. Like R.E.M. before them, Scottish trio Biffy Clyro spent a number of years as critical darlings, before crossing over into the mainstream. Their flagship moment was 2007’s Puzzle, which combined the group’s fidgety emo with a widescreen outlook. Sam Lambeth looks back as it celebrates its tenth anniversary.

Biffy Clyro’s mantra had been laid bare from the start – expect the unexpected. This slogan didn’t just apply to albums or other releases, though, as often a singular song would segue into various time signatures, shifts and sounds; the sign of a good Biffy track was one that comprised of a completely juxtaposed beginning and end. After three jagged, but joyful, albums that more than matched their contemporaries (think Rival Schools, My Vitriol and Hundred Reasons), Biffy’s watchwords would reach fever pitch with their fourth LP.

Puzzle, on the surface, is where Biffy ‘went straight’. In a perverse way, however, creating a more conventional collection, or ‘the expected’, was the most unexpected thing the Kilmarnock trio could muster. Fans were used to pinched harmonics, dissonant shards of melody and wonderfully verbose song titles (see: There’s No Such Thing As A Jaggy Snake). In fact, such was their zeal for scrappy, late ’90s emo if it wasn’t for Simon Neil’s broad Scotch brogue Biffy Clyro could have been pigeonholed as being straight from Seattle.

However, put the pieces of Puzzle together and you will find a record that isn’t quite cohesive. While a more streamlined approach would arrive later (2009’s Only Revolutions and even last year’s Ellipsis cemented the band’s place as, rightly or wrongly, the British equivalent to Foo Fighters), Puzzle sees the trio – completed by the pummelling rhythm section of the Johnston twins – take their love of unpredictable bombast and merge it into more straightforward, but no less thrilling, compositions.

Official lead single Saturday Superhouse was a clear break from tradition. The moth-eared edges of Neil’s distortion had been buffed and beautified, but still possessed a summer sting. Its eschew of erratic breakdowns and structures presented Biffy in a whole new light – all of a sudden, here was a band able to take the well-worn blueprints of alternative rock and give it a fresh lick of paint. …Superhouse had the anthemic bluster of a festival anthem, but it left Biffy fans feeling a little short-changed. Neil, though, urged them to stick with them: “We knew people were going to have this reaction,” he said. “We could’ve put out a couple of weirder ones first but we wanted to take people by surprise. Just listen to the whole album.”

The result is a record, polished but not pulverised by GGGarth Richardson, that blends Biffy’s previous idiosyncratic indie with highway-wide longing. They had dealt with raw emotion before, but never as arresting as on two of Puzzle’s standout moments, Folding Stars and Machines. The former begins with a twinkling guitar arpeggio before erupting into a wrenching blast of forlorn fuzz, Neil’s aching roar of “I would do anything for another minute with you, cos it’s not getting easier” a wounded lament to his late mother. It would be years before Biffy introduced it to their live set, such was the harrowing nature of the track, but its elegiac melodies make it one of their defining moments.

Mourning makes up a great deal of Puzzle. “Everybody’s not happy all the time so this was always going to be a dramatic, sad record but that’s why making it was tough,” Neil said, but through this grief he produced stellar songs. Machines is the barest the band had been at this point, a haunting viola intertwining with Neil’s downbeat acoustic chug as he sighs “I’ve started falling apart, I’m not savouring life.”

If fans were worried Biffy had been watered down, they still resisted the pull of mainstream mundanity through the rest of the album’s tracks. A While Child Ago turned the post-punk riff framework on its head, all stuttering staccatos, Flea-esque bass and Neil’s ruminations on lost adolescence. Who’s Got A Match? blends Neil’s trademark troubling lyrics of eye patches and witches with a strutting guitar growl, and the disjointed melodies of As Dust Dances, where Neil ponders “a man on the corner, selling dozens of bones, every type of bone, except the one that I want.”

The record’s arms-aloft moment comes straight away. The wonderfully glib title of Living Is A Problem Because Everything Dies begins with swaths of ominous strings, multiple snare attacks and, at one point, the sound of Neil’s guitar emitting a slight introductory riff, ready for the battle ahead. By the time it reaches its thrilling climax, it has encased a tense choir, luscious string work and Neil’s own insecurities.

Neil intended Puzzle to be “a journey”, and the tracks that lie within, as well as the breathtaking artwork from Pink Floyd contributor Storm Thorgerson, show a band, like Scottish stalwarts Idlewild and Teenage Fanclub before them, ready to shake off their esoteric past for more classic waters. Puzzle may be a defining moment in the band’s back catalogue, where they shed their skins for a new horizon, but it has enough edges to please both old and new fans. Mon the Biff, indeed.