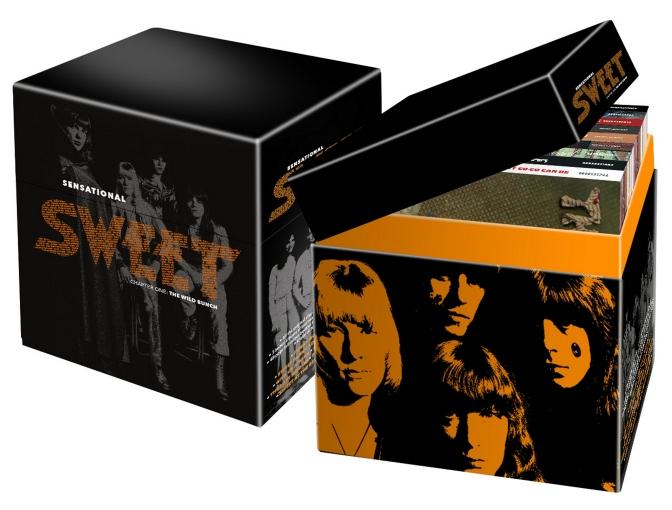 A very healthy box set that gathers together the influential glam rockers Seventies output. Maybe one or two gaps may not totally satisfy the Sweet  hardcore but a collection that ably demonstrates that beneath the tip of the iceberg that represented the band’s chart success, lies a back catalogue of some depth.

Not that anyone ever needs to be asked twice to take the chance to sit back and wallow in the reflective glow of nostalgia in time honoured “those were the days” fashion. The days of Top Of The Pops for some of us young pop pickers in the seventies proved an education for whom Alice Cooper generated genuine consternation – it’s a woman’s name, but he’s a bloke. Chuck Berry sang about his ding-a-ling…it’s ringing his doorbell surely? And then there was the more obvious Little Willy by The Sweet…or just plain Sweet. And of course the pleasure in watching the ongoing and unwritten combative streaks of the glam rock guys who always seemed to be outdoing each other with more and more outrageously glittered stagewear and stacked heels. Among the Slades and the Bowies and the Motts, were our men whose reputation was being built not just on a Little Willy but Co-Co, blockbusters and teenage rampages.

And then one of them went the extra mile with a bit of an unusual appearance – even more so than the other three. Perhaps Steve Priest’s feminine side coming out and becoming one of the band’s USPs in their Seventies heyday. Looking back with the rose tinted designer shades and with the power of hindsight, we can probably now see why (The) Sweet were groundbreakers; Legends after their own lifetime. Their website includes homepage testimonials from Gene Simmons, Joe Elliott and Nikki Sixx and for a while, their cycle of Chinn and Chapman sure fire hit singles gave them an almost constant presence in the media of the day. Nine songs that hit the heady top spot of the charts

Easy to see how they could have been labelled as a singles band. This collection and those in the know will testify that as an influential album band, Sweet carried a hefty punch alongside the glam and glitter boom of the age. Musical quality, a commitment to carrying the high profile singles success into album production and also on the live stage. 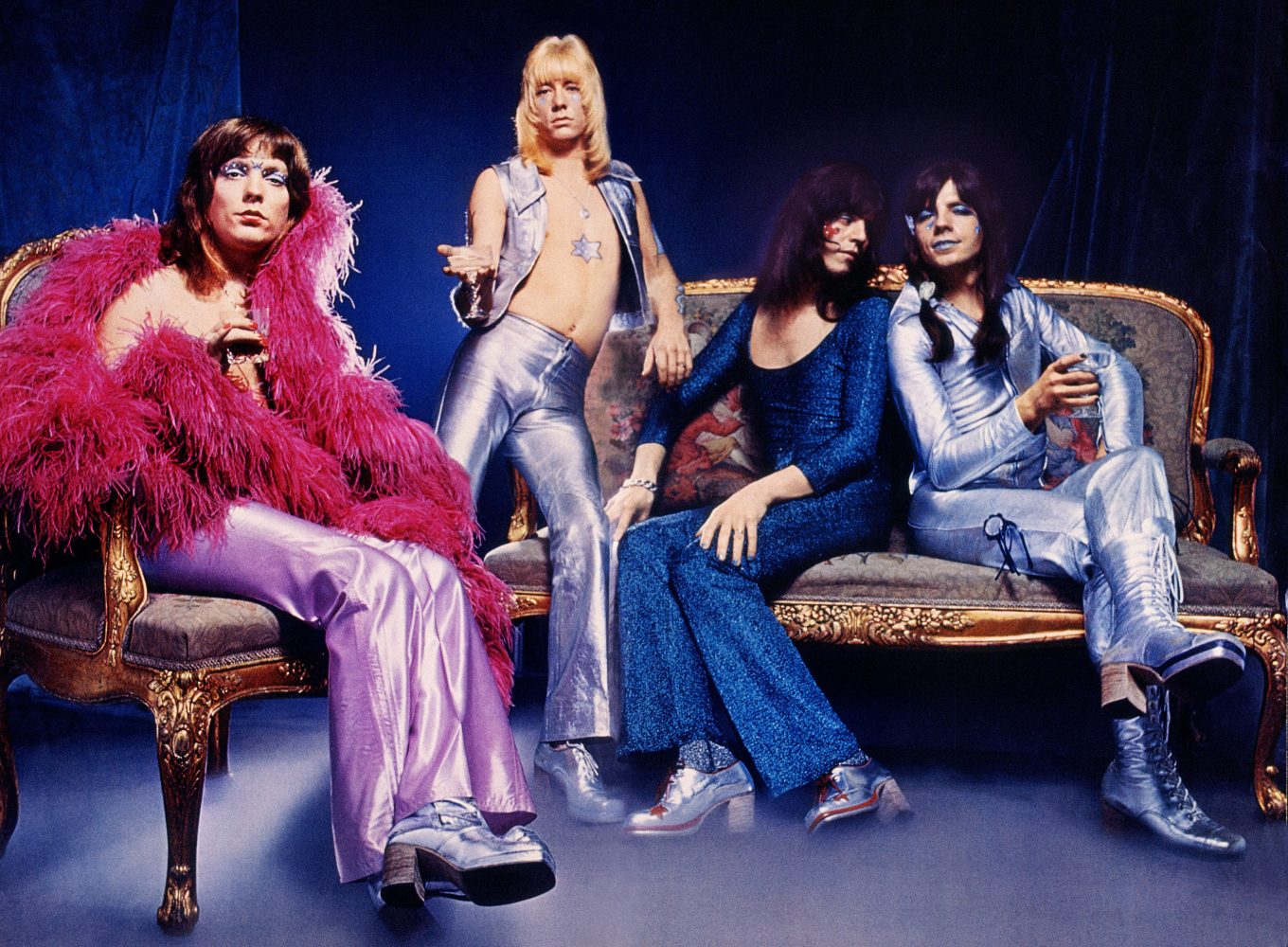 Time has been kind; Sweet may be up for induction as a national treasure possibly but certainly the sort of band that instils a warm nostalgic glow when the satellite channels start to dip into the musical archives. They’ve gone through the process of reforming and rising again while in the meantime, this tremendous – both in scope and in value for money (always a bonus) – box set honours the legacy with a 9CD collection of their music from 1971-1978. A period when they earned the nickname of ‘The Wild Bunch’, the classic line up of Mick Tucker (drums), Brian Connolly (vocals), Steve Priest (bass) and Andy Scott (guitar)

All the original albums are here with fully restored artwork and bonus tracks plus three additional CDs including non-album singles and b-sides, a full concert and BBC Radio sessions. It amounts to 30 previously unreleased tracks plus a 52 page booklet to browse through while nodding sagely as the hits roll on and the album tracks complete the picture. There may well be some absent gems of course, that the hardcore fans will pick up on and argue the case, but so much more for the more less hardened to appreciate.

From the beginning, Funny How Sweet Co Co Can Be, the original studio album from 1971 looks very much of its time; the cover picturing the guys, Steve Priest looking very Ron Weasley and giving their fans some bio snippets.

The albums are simply quality seventies hard pop rock. Possibly groundbreaking, but in hindsight again, clear proof of how the boys proved an inspiration for their generation. Take, for example, Sweet Fanny Adams. Set Me Free giving an indication of future directions of Queen – just check out the operatic harmonies – and relentless drive of Motorhead, while there’s a Heart style Barracuda rush in Sweet FA. There’s a terrific game to be had to see where Sweet have continued to influence those who followed. Along with Desolation Boulevard, knocked out a mere six months later and included a broader musical palette, the pair might arguably be the band at their creative peak.

The classic line up split after the last of the studio albums included in the set, Level Headed. A musical sign that things weren’t well; that the bubble was about to burst, but moving swiftly on, the additional three CDs throw up some quality pickings. The Lost Singles gathers all the non album singles and b-sides, nothing particularly startling, but the appeal may like more with the final two discs. The Rainbow (Sweet Live In The UK) comes described in Dave Ling’s booklet essay as “one of the biggest misfortunes in Sweet’s history.” The long story of technical errors on the night and general cock ups on the recording front see what’s perhaps the most definitive document finally emerge in all its remastered finery. Not pristine, but as close a document as you’ll get of an official live record of the classic line up. Complete with high pitched screams in response to some of the sort of onslaught you’d get in a Zeppeline/Queen gig, rather than the sort of throaty roar you’d expect from an early seventies hard rock show including a diversion into the acoustic for You’re Not Wrong For Loving Me.

The singles naturally, are all there including what sounds rather strange as they announce Teenage Rampage as the ‘new one’ plus a vibrant rock’n’roll medley, which leads us nicely to the Sweet At The Beeb set that unearths a mighty collection of radio sessions. Taken from the late sixties and early seventies it shows a fledgling glam rock band working their chops on a series of influences from the Fab Four to The Who and Eddie Cochran before a glimpse of what would evolve into a fruitful partnership with the Chapman/Chinn Chop Chop and Santa Monica Sunshine.

Undeniably a handy little box for those whose interest stopped as the Number 1’s played out on a Thursday night TV and proof of the vast hidden archive that lies beneath the classic yet surface scratching singles.

Watch Blockbuster from a 1973 Top Of The Pops in all its glitter styled glory here: