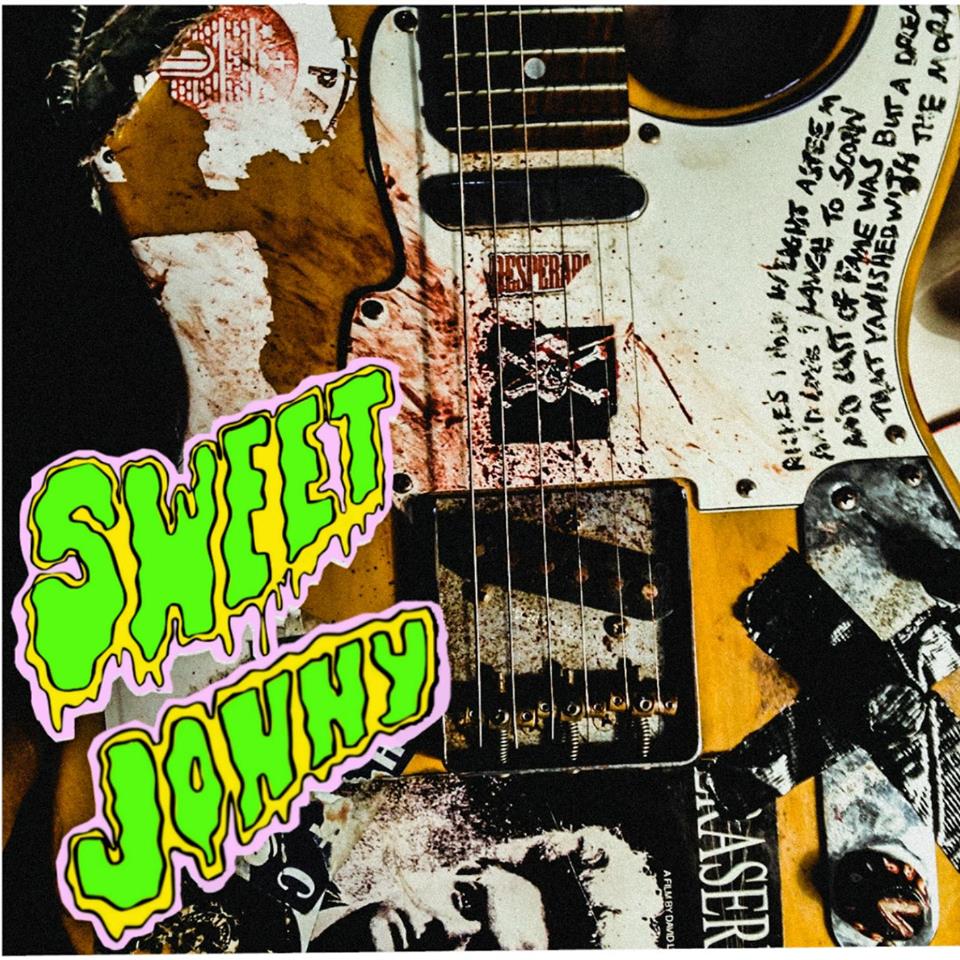 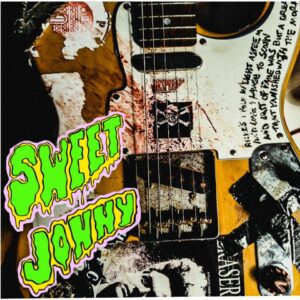 After three EP’s, a live album, hundreds of sweat-soaked, blood-splattered gigs, Sweet Jonny release their debut studio album.  Ged Babey goes back to the Garage with his bullshit detector.

I love the way they describe themselves: A gutter garage rock band from a do-nothing town. Your new nightmare neighbours.

Sweet Jonny are often found on the bill at many a Punk All-dayer and pub-based Festival.  They have no doubt supported every old-punk-rock hero hauling their carcass ’round the circuit, but they are not yer standard punx.  More of a ‘What Would Stiv Bators Do?’-type Garage band in love with dirty rock’n’roll but putting their own spin on it -without fake American accents, and with some great musicianship which they try and hide with all-important attitude and slip slidin’ guitar.

Their songs are complicated crammed-full-of-lyrics story-songs about fighting, madness, drinking and burning the candle at both ends – and then stuffing it up yer nemesis’s arse.

The opening Devil What He’s Due starts with the words “Your mum’s a dirty slag..” and takes it from there.  A tale of gang warfare where “The Teflon kid gets off once again”.  This review says it’s reminiscent of (early) Boomtown Rats, which is true of the way the song is constructed rather than the actual sound.

Sick In The Summer rhymes summer with what a bummer and Toms vocals sound very like JJ Burnels ‘Ugly’ yob-orator vocal style.

Crack Of The Whip: is a nice piece of Iggy meets Dead Kennedys via the Cramps which if nothing else proves a lot of Sweet Jonnys influences are American rather than British.

Wither seems to inadvertently nick a riff from the classic Raw Records song by Some Chicken ‘New Religion’.-but it could be sheer coincidence as the band look far too young to remember such punk obscurities.

American Psycho is full-on Cramps meets Fear -punkabilly with a manic juddering vocal and stop/start dynamics punctuated by a holler of “I think I’m losing it!” Arguably the best track.

On Mr Know It All, singer Tom employs a Vanian style croon.

Animals is a bit of an epic. Far more time changes than yer average punk band. Sucker Punch too shows the bands musicality – but the vocal delivery dominates proceedings with a sheer sleazy joie de vivre.

Mother Knows Best -is another manic, neat, screecher with its refrain of:

Pathos and It Matters Not seem to have a touch of (Courtney Loves) Hole about it -and there are Sub-Pop Grunge and even Bluesy Metal influences throughout the album.

The last track, Kill Your Poets, is almost a ballad in waltz-time but the vocal is gargled and howled in Tom’s strange over-enunciated way whilst the guitar is the grittiest and filthy of all the songs: –Soliloquies and sonnets/  You’ve killed off all the poets.

Overall it is a really confident, enjoyable album by a  band that have a distinct personality of their own and are a lot of, low-down and dirty, fun.  But….yeah there has to be a but… it’s let down by the production which pushes the vocals up and the guitars down in the mix (Most low budget punk albums have the opposite problem -which could explain it, being a conscious move to avoid that.)  That said, there’s not a single person who has seen the band live who is gonna be concerned about that, because for a change, you can hear all the lyrics – unlike thru a dodgy cranked up PA.

Sweet Jonny are cartoon chaos and as one of their songs says. ‘a walking cliche’. but they do it well and don’t give a monkeys, a shit or indeed a fuck.

Listen on Spotify  or I-tunes