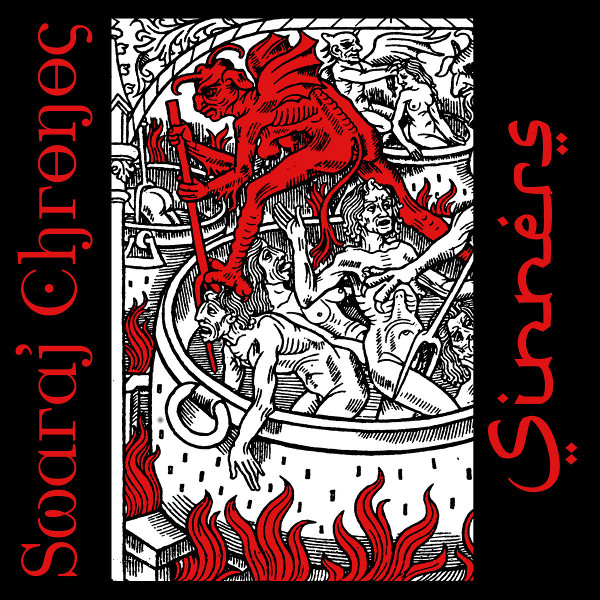 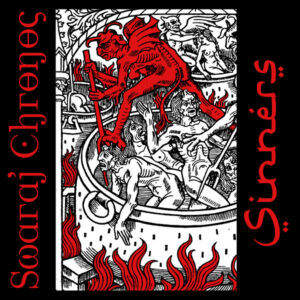 The debut from South London DIY punks Swaraj Chronos fuses elements of punk, post-punk goth,metal and grunge then sticks two fingers up to racism and religion.

Swaraj Chronos have made a bit of a splash in a relatively short space of time featuring on a fair few DIY punk bills, mainly in South London, so when bass player Suresh thrust a copy of their CD into my hand at the Punks Against Sweatshops gig in London I knew they deserved some exposure.

The striking first impression of Swaraj Chronos is singer Ness’s voice. She puts in a fine performance and I was surprised to find that she hasn’t been in a band before. It’s rare that you hear someone who can cover such a wide range vocally that plumbs the low notes while still able to hit the high ones. She sometimes warbles a little too and the overall vocal style immediately brings to mind Siouxsie Sioux and Helen from the Violators. This gives Swaraj Chronos a post-punk/goth feel.

The music is often led by the crunchy twang of Suresh’s rambling rattling Rickenbacker bass. The drums accentuate the songs rather than just providing a beat and Ant batters his way round the whole kit. No skin or cymbal left unbattered. Raff’s guitar playing uses a range of tones but for the most part washes through with a wide and saturated overdriven grungey bandwidth. The occasional snatch of wah-wah fits perfectly rather than sounding like an ill chosen afterthought.

The funky and rocky riffs really do remind me of that whole grunge scene and the early 90s in general with a touch of post hardcore. When they give a quick blast on the accelerator, the resulting slight messiness and noisey sounds evoke the likes of 2000 DS or Disorder. When they get a bit heavier I’m reminded of the London crusty punk scene of the 90s that seemed to be centred around bands like Coitus and Dread Messiah.

Aside from the title track and it’s attack on religion the songs seem to fall into two camps: personal angst and systemic racism. A band with members from global diasporas reflects modern multi-cultural London, so the latter comes as no surprise. The issue is viewed through several prisms.

Numerous deaths at the hands of the police (“Say their names…” they implore on We Can’t Breathe). The whitewashing (yes, I choose that phrase pointedly) of history that conveniently forgot the vast numbers of people dragged from “the colonies” to fight in World Wars. Finally, on Allied Forces they make the point that freedom is rarely the outcome of occupation and colonialism sets in (either old fashioned or the neo-colonialism of capitalist takeover). I also felt that there might be an implied be comment on “allies” taking the knee to oppose racism being tokenism. The allies get to walk away from the issue at the end of their action, something those on the receiving end of racism don’t get to do.

Listen to We Can’t Breathe by Swaraj Chronos

In the middle of the CD there is a 6 minutes and 38 seconds journey into experimental psychedelia. With its intermittent laughter, playful time signatures, repetitive bass line and plenty of guitar effects, of Cold Sun (originally by Bandiera Dell Odio, guitarist Rafaelle’s old band) is psychedelia through the dumb rock filter of The Stooges rather than the Pink effing Floyd.

This is very much a punk DIY family production. Whilst the band didn’t literally do it all themselves, the recording was produced by the wider family.  It is one of a growing number of sessions produced by John Youens of South London Punk Collective and the band Slow Faction, and Mao Holiday of The Babes. The recording session took place at the wonderful Overdrive Studios run by the John and Sarah from P.I.G. I have heard stuff recorded in far more expensive studios with professional producers that managed to flatten out all the energy. This demonstrates that sometimes the only way to get good punk music out if a studio is to make sure punks are at the controls.

Overall it is difficult to pigeonhole Swaraj Chronos. For the most part melodic, they indulge in a bit of psychedelic noise. Like muscial magpies, they have plundered grunge, goth, post-punk and metal to create their own thing.

In line with the title, the CD itself a couple of nuns involved in a sinful embrace and there is a cheeky medieval woodcut image of hell on the front cover. While they are doing things their own way, and address some seriously heavy subjects, they are also having fun at the same time.

The variety of the Swaraj Chronos sound will make them a good fit for a festival line up. They are also part of a current wave challenging the lack of diversity in punk in the only way it can be challenged – don’t ask permission… Learn a few chords and form a band!

Get this release via bandcamp.