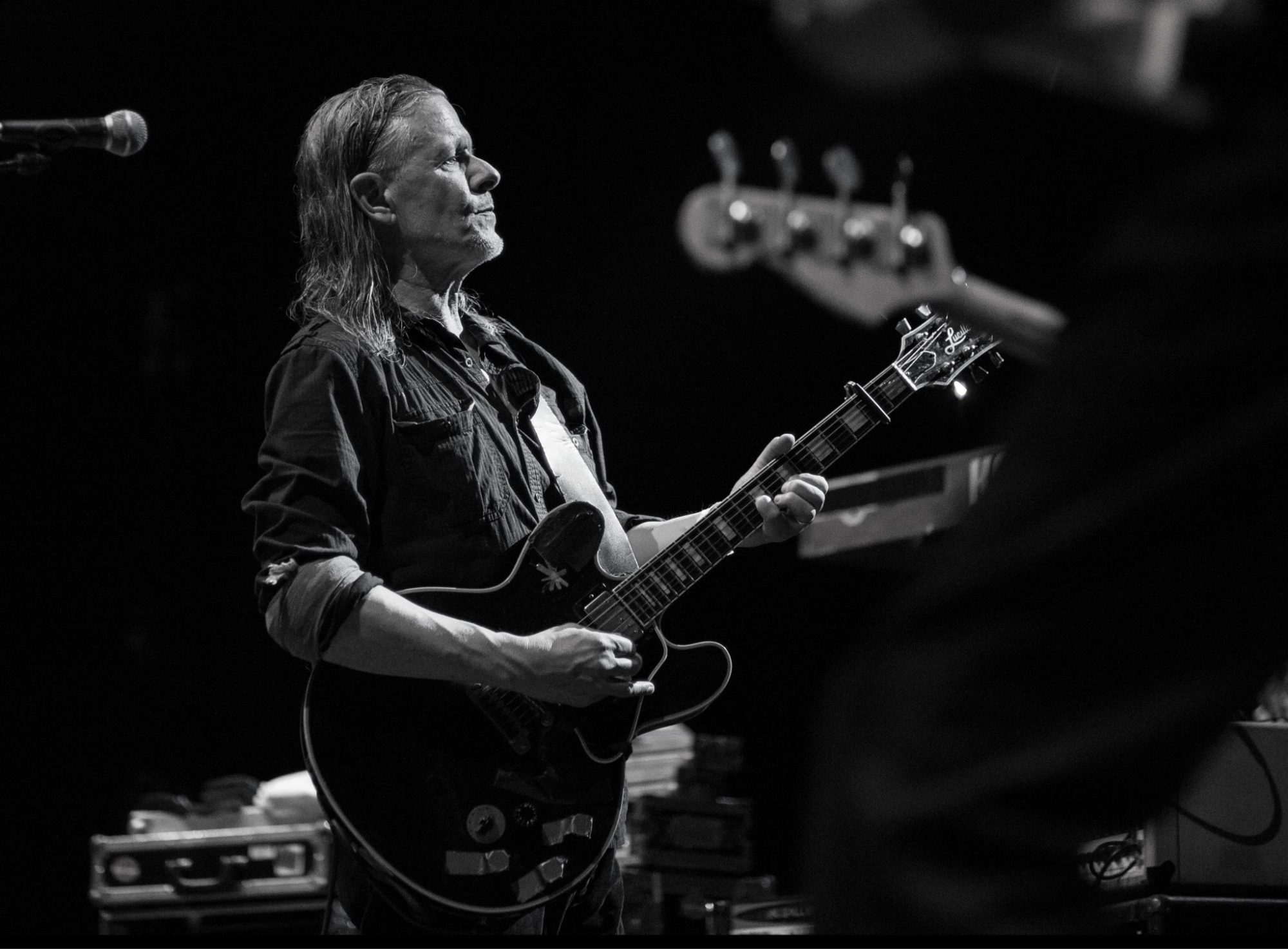 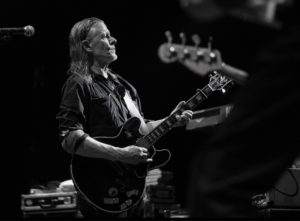 It’s one of those kind of gigs where people talk about ear plugs.

But volume used in the best possible way.

Transformer festival is a new event perfectly placed in the huge Victoria Warehouse on the edge of the old docks area in Manchester. The forbidding cavernous red brick structure frames these kind of monolithic bands perfectly – like it’s a building big enough to contain their huge ideas and vision.

The Fall are always there to be celebrated.

Mark Smith has been under the weather recently so its a relief to see him back prowling the stage again and if physically he has been taking a beating – and he looks unwell tonight, mentally he seems as acidic and on fire as ever bellowing his bellows down his two mics and stalking the stage like his vision of fiery jack finally come to life. Maybe the challenge of every great artist is to make sense of the twilight years. The Fall are a reflection of their singer’s journey.

The Fall are as brilliantly unfathomable as ever – switching from moments of clattering power to sublime sections where the arpeggio’d guitar connects with the rhythm section for some pure magic before switching to power clatter where the elusive use wanders away and then catching it again.

The Fall are never meant be easy but there is an added focus about their mithering tonight, Smith seems focussed in the maelstrom connecting directly with the audience with his baleful stares at the moshpit daring anyone to try and understand the message in his madness.

It’s impossible to hear a word he says in the reverbing room but somehow it all makes sense. You can feel his genius, you can connect with his snarky genius as he glowers, cajoles and spits his brittle poetry over the churning backbeat.

Even when he turns the amps up and down tonight he gets it spot on – delivering an onstage mix like some kind of northern Lee Scratch Perry – cranking up the Korg lines played by a new member just when they were needed, adding a colour and drone to the songs when required before turning to add a bit of clip that was needed to the bass before wondering off to stand in the corner of the stage examine his fingernails with only his band new crisp white shirt visible in the big venue gloom.

Older age suits the Fall. Mark Smith is now 60 yet veteran status has sat on those shoulders for decades, his spittle flecked hatred of youth culture piffle always made him engaging and the Fall somehow manage to retain that danger and relevance to this day.

Another over 60 who is surfing the cutting edge in Michael Gira. Swans are something else. And this, the last UK show with the current line up, is an exercise in epic.

The sheer breath taking sound and scope of Swans may take decades to understand, they have the dynamics of a brooding classical orchestra – songs that ebb and flow and build and collapse in layers and layers of perfectly capsulated sound. They can build on keyboard drones and waves of apprehension and tension and into blissful crescendos, then they have songs that hook around huge grooves – James Brown as big dynamite, grooves that create a pulsating primal chug, monster grooves of mutoid funk that hit the body in primal twitches. They also somehow meld the adventure of the late sixties like the End by the Doors through the finer moments of prog rock and into the adventure of post punk – no one one else has dared to make music this ambitious with songs measuring 20 minutes sometimes, songs this heavy and mesmerising – and made it work.

They just present all this stuff, this avalanche of emotional skree and leave you to make up your mind. There are no apologies, just this wall of dark genius that can be a tsunami of volume or moments of blissful beauty. There is terror here but also bliss and a powerful send of control – this is not noise music – not random hitting stuff to make a racket – this is a behemoth carved from stone music, a 60 ton Richard Serra metal sculpture made into sound that is controlled by Gira’s conductor hands or by his enormous vision.

You can dance to it, ebbing and flowing with the music or you can let its majesty wash over you, you can surf the sound and let the trip continue for ever. Terror and beauty. Life and death. This music is about the big stuff.

Swans last stand is a bold and thrilling trip setting its controls for the heart of the sun. There always was a finality about their music – like the death trip but now they have decided to end this incarnation you feel the destiny of their power and the delicious question marks of where next captain…

This was an incredible concert – ambitious , bold and powerful and like nothing else, a last glimmer of the adventure of the sixties that the 14 year old tripping Gira saw in his youth and is still celebrating now as he boldly goes forward…