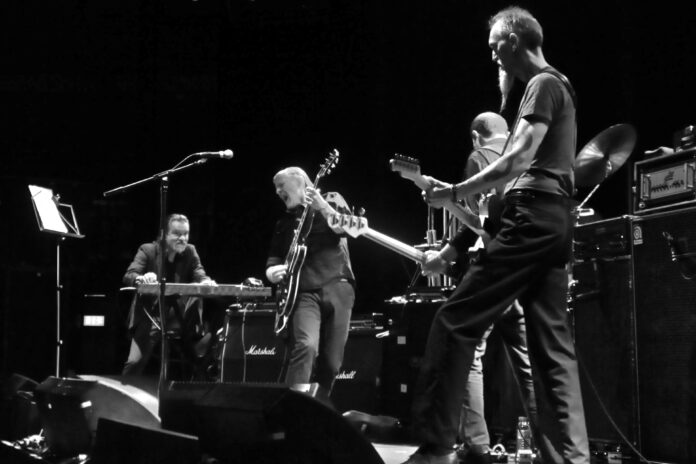 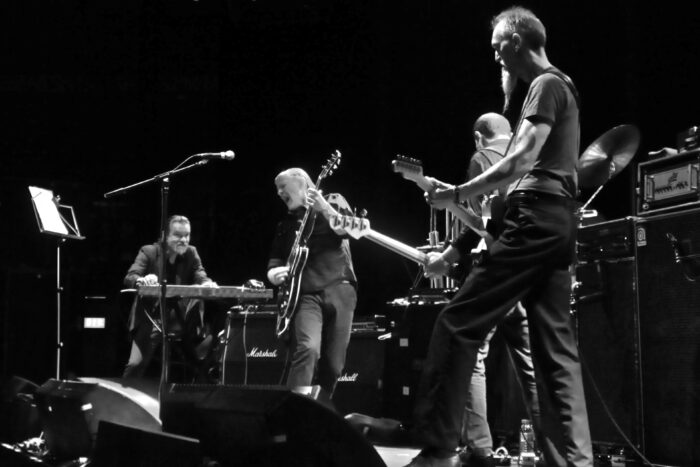 Michael Gira and his gang of sonic cohorts visited London’s Roundhouse venue for their biggest ever UK headline gig. Simon Tucker stepped into the breach for Louder Than War.

Entering the circular space that is the Roundhouse you get an instant sense of history seeping through the air. The ghosts of a million artists swirl around, and tonight a conduit to the other plane will invoke, rile, and aggravate them. That conductor of spirits is Michael Gira who, with his tribe of marauding Swans, will pummel and tease those in attendance with some glorious voodoo magic. But first…

Jas Shaw (Simian Mobile Disco) is first to enter the pen, painting a tripped out, analog synth-driven picture that doesn’t instantly grab the attention but as the set develops and we are taking into darker, and more intense territory, more and more people get drawn into his sonic sculpture. Pieces get darker and more layered as the set unfurls making for a pleasant brew of ambient textures and insidious drone. We are warming up nicely…

Second support, Okkyung Lee is where the night REALLY starts to take us into the abyss as the cellist blasts through 15 minutes of cacophonous improv, flying up and down the strings generating guttural and unholy sounds whilst managing to flick moments of life and rhythm through the pieces she plays. Lee’s set was remarkable, a tour-de-force performance that lit up the room, disturbing and inviting all who witnessed it. Every second felt like Okkyung was playing for her life, trying desperately to raise the stirring spirits. At one point, it seemed that she was going to burst into flames as a combination of the lighting and the resin on her bow created a smoke that rose in front of her, cloaking her in a mystical aura. A monumental 20 minutes of live performance, Okkyung Lee is one of the most exciting live performers out there. Make sure you catch her when you can.

Slowly a Nordic figure strolls onto the back of stage, gently easing a gong into life, caressing it, injecting it with a pulse and a swirl, before another figure steps on stage right, settles behind a drum kit and joins in on the ceremony, raising the stakes, ramping up tension. Strap in folks, we are about to depart for a journey into the soul. Three more musicians then make the entrance, one settling behind a keyboard whilst the other two pick up guitars and bass respectively. The pulse starts to race, adrenalin courses through the Roundhouse, people are nervously twitching, gathering their thoughts and setting themselves ready for take-off which is initiated the moment the grizzled, foreboding figure of Swans main-man Michael Gira takes his place center stage.

The sight of Swans on a stage is truly a step into a world many of us will only have seen on film. Together, they look like a gang of marauding outlaws ready to burn down the houses of the oppressors, freeing us from the tyranny of government and capitalism. Gira himself looks like he was dragged from a John Ford film and placed in the modern day, all twitching, curled up rage, directing his troops through a séance aimed at washing us clean, stripping away modern day trappings and revealing the true essence of the human spirit.

The rest of the band, Thor Harris (percussion, trumpet, texture) Chris Pravdica (bass) Phil Puleo (drums), Norman Westberg (guitar) and Christoph Hahn (lap steel guitar) are an air-tight unit, riding the crest of the wave and pulling together, smashing and teasing us beckoning to the gods, creating a space for Gira to chant & shout, speaking in tongues.

Yes they were loud, but to just talk about the volume at a Swans concert is to completely miss the point. Volume is used as a dramatic tool creating dissonance and discord tearing your chest open to reveal your inner workings and there are parts of tonight’s show that are just pure, filthy funk. Like an amphetamine fueled Iggy, stalking the streets of Detroit.

Drawing heavily from their recent masterpiece, To be Kind, the set tonight is pure theatre. It was Bickle pulling an imaginary trigger next to his temple, it was Alex tied to a cinema seat as his lovely lovely Van was destroyed by images of Nazis and ultra-violence, it was the ape throwing the stick in the air.

Swans have their hands in the clay, they see beyond these walls we have created and they tear them down brick by brick in a feat of extreme musicianship that you normally find in a jazz setting, not amped-up, balls out rock. They are fire-and-brimstone preachers, they are black magic priestesses, they are the now, they are the past. They are the soothsayers and mediums that are demanding we reach out to each other with love and compassion (Gira’s tales are, at the root, tales of love and of a need to connect). They are biblical.

2 1/2 hours fly by and the biggest surprise of the set is the last 15 minutes as the band all lock into a German motorik rhythm that rides and rides and rides grooving and pummeling you, demanding you dance as we are now fully involved in the ceremony, no longer bystanders but a fully paid up member of the congregation.

Swans live is as close to a religious experience us non-believers will ever have. There was definitely something transmitting through us all. An audio and visual masterclass, tonight Swans showed everyone how it’s done.

Make sure you get to one of their sermons, you will be altered within forever.

Keep up to date with all things Swans via Young God Record’s website: younggodrecords.com. Swans are also on Facebook, as is Michael Gira.