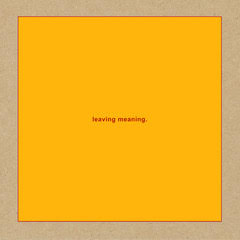 Swans first album since main man Michael Gira disbanded the 2010 – 2017 line up sees Gira involve a clutch of collaborators to help him with his sonic mission. Simon Tucker reviews.

From 2012’s The Seer  – 2016’s The Glowing Man, Swans had a run of albums that were unique, pulvarising, ecstatic and darkly joyous. The music Michael Gira and his bandmates during that time seemed drenched in the dirt we walk on with ideas of reaching the stars…and many times they got to their destination. When Gira announced then that he was disbanding that line up it felt like the correct decision. This line up had taken that collective ideals and mission statements to its logical conclusion. So what would come next??

Well what would come next was ugly for Gira with the singer Larkin Grimm accusing him of rape. Gira denied the accusations and neither the case seems to have gone quiet. These accusations didn’t affect Swans gig ticket sales or that of that year’s album The Glowing Man. So where do you stand when writing about Gira and Swans? It is easy to either totally blank out any of his further works especially in today’s “cancel” culture or you can focus on the music itself knowing that the ever reliable and trustworthy Mute are still releasing his albums and people are still willing to work with him. The latter is fine and is what this writer will strive to do (I still play Swans on my radio show so it be would be hypocritical of me to now start distancing myself from Gira’s work).  leaving meaning. feels like a natural follow up to The Glowing Man with Gira’s lyrics still waxing poetic about religion, the elements, and folklore imagery only this time the album is rather brief for Swans and its brevity serves it well.

Musically, there is a slight shift tonally from what Swans had been creating previously with the only song that feels like it belongs to that past life being the brilliant The Hanging Man. The Hanging Man is Swans doing what they do best with an infectious groove that grabs the side of your head and forces you to stay locked for its entire duration. The Hanging Man is full of rich symbolism and music that is so addictive. Snakelike and beguiling, The Hanging Man is simply brilliant.

The rest of leaving meaning. sees Gira and co take a more expansive approach to the sound making the album not one that slams you over the head like its predecessors instead there is an earthiness to it with strings, piano and the acoustic guitar playing major roles. When they all combine, like on album highlight Sunfucker, leaving meaning. stands shoulder to shoulder with the bands acclaimed 2010 – 2016 run of albums. Sunfucker is mysterious and epic. Grandiose yet intimate. Intense yet sensual. A great great song.

One of leaving meaning’s biggest assets is its production. Gira’s voice is placed slap bang in the middle of the mix, an anchor in the storm. Around him the album is painted in shades of brown and red with singers sometimes lifting him up or surrounding him in wordless echoes of atmospheric unease. Percussion is often in the background shuffling and textural whilst guitars are now gradually layered instead of shock-jump slabs of sound. Gira really knows how to chose his fellow pirates well.

It was always going to be interesting seeing where Gira would go sonically after The Glowing Man and its two predecessors. Under his own name he has often played solo acoustic gigs so you had to wonder if this would be the path he would follow. Instead, Gira has married his acoustic output to the cavernous Swans sound helping to reinvent the band in a way that is not too dramatic but different enough to know that we are now dealing with a new Swans taking on yet another challenge. leaving meaning. shows that there are many more interesting twists and turns in the Swans story and is an album that in no way dissapoints.