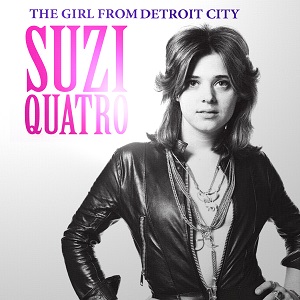 As a 6 year old in 1974 I was madly in love with Suzi Quatro. I think it was love, or maybe it was the leather cat suit? Whatever, I loved her.

An astonishing career spanning six decades is now represented in a lavish book-bound boxed set of four cds containing singles, b-sides, rarities and unreleased tracks which celebrates 50 years in music. Suzi without doubt paved the way for Debbie Harry, Joan Jett and others like them. Playing the seemingly huge bass guitar which almost towered over her, she brought the profile of women in music to the fore.

Beginning in the 60s with Sister Patti, The Pleasure Seekers had a brief relationship with Mercury Records releasing soul inspired tracks. In 1971, the legendary Mickie Most came across Cradle (the renamed Pleasure Seekers), and not particularly liking the band he did love the bass player.

Releasing her debut solo single, Rolling Stone in 1972 met with little interest, but the following year saw not one but two UK number single with Can The Can and 48 Crash written by Nicky Chinn and Mike Chapman. The songwriters extraordinaire of the era also had big hits for The Sweet and Mud and helped create the sound for which Suzi would become known.

The Top 20 hits followed for the next two years including another number 1 in the form of Devil Gate Drive. When the hits floundered slightly in the UK, they blossomed in Australia until a return to the Top 5 with ballad If You Can’t Give Me Love and She’s In Love With You.

Often labelled as part of the Glam rock movement, she wasn’t. Suzi was good old rock ‘n’ roll, the nearest she came to Glam was wearing a trademark catsuit in silver. What she was, was definitely a revolution.

What is interesting in this collection is watching Suzi’s trek through styles of music over the years. Her venture into mainstream pop (including the very average cover of Wild Thing) and into the West End with her starring role in Annie Get Your Gun showing what an amazing voice she has.

There other cover versions too – Glad All Over (The Dave Clark Five), Does Your Mama Know (Abba) and Breaking Dishes (Rihanna), the most impressive though is her take on Strict Machine where the pumping bass is key and the song fits Suzi like a metaphorical glove. The insertion of lyrics from Can The Can perhaps also referencing the similarity of the guitar riff on which the Goldfrapp hit is based.

The fourth cd features unreleased tracks, rarities and demo’s many released for the first time including a version of The Normal’s Warm Leatherette where an outtake from 1980s Rock Hard album is giving its first outing. Grace Jones would have a huge hit with it later the same year.

With well over four hours of music, the collection if fascinating. One of music’s true legends finally acknowledged in a career spanning release. The collective also contains the new single of the same name which lyrically is a clever summary of the beginning of Suzi’s career and there’s no real reason why it couldn’t be a success for her. Maybe if she sports a 5” Blitz Club quiff and wears the arse of her jeans round her knees it will be.

PS I still love you Suzi.