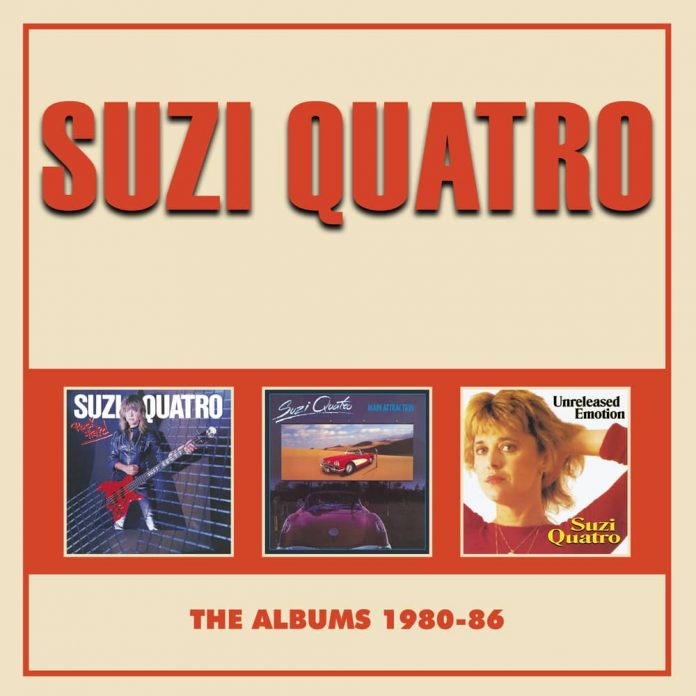 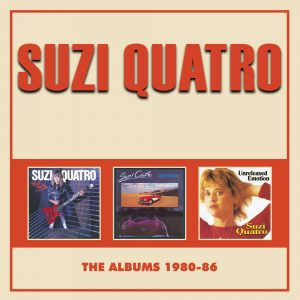 Boxset which brings together the Suzi Quatro albums Rock Hard and Main Attraction from 1980 and 1982 respectively and Unreleased Emotion, a LP that was recorded in 1983 but not issued for another 15 years. There are also seven bonus items included. Ian Canty finds out what Suzi did after her early 1970s glam slam…

Outside of Bowie and Roxy Music, Suzi Quatro may have been best placed out of the rest of the glam hitmakers to cross over into the new wave world of 1980 without much of a hitch. By being a prime exponent of no-nonsense, supercharged rock & roll with pop appeal that was no pose, all impact three years earlier than Year Zero, she gave the lie to the codswallop received wisdom that only punk made it possible for women to step on stage on an equal footing to men. Suzi was indeed an inspiration to those who followed, as tough as anyone and simply kicking arse while clearly having a ball doing it.

Though glam rock had grown cold by the mid-1970s, she still achieved a decent level of success worldwide with her records and worked this activity around an acting career that had seen her star as Leather Tuscadero opposite Henry “The Fonz” Winkler in the wildly popular US comedy series Happy Days. A few years later on from when the first LP of this set Rock Hard was issued in 1980, she would play the part of Nancy in Minder alongside George Cole and Dennis Waterman in the UK. The role was one of a toking rock & roller and she got to sing Lipstick and Lonely Is The Hardest from the aforementioned album as a result. As the LP it had been out over a year by the time the show was broadcast in 1982, this exposure was unfortunately came too late to help it commercially.

Going back to 1979, she had bounced back to score a big UK hit with the She’s In Love With You single, so one can imagine Quatro and her band approached the Rock Hard album on producer Mike Chapman and Nicky Chinn’s Dreamland label with at least a guarded optimism. That confidence was well placed, because this bawdily titled record is a solid no frills rock & roll LP with a good deal to recommend about it.

The song Rock Hard itself starts the collection and has more in common with the high energy r&b of Dr Feelgood than anything else, which is a mark in its favour for me. Suzi is in screamingly good voice and it was the LP’s sole chart single, selling particularly well in Canada. The also was included in the soundtrack of the film Times Square (which is airing on Talking Pictures on the day I am typing this). Next comes a cover of Glad All Over which is quite enjoyable, if more or less exactly how as one would suspect. A more sultry but still tough Love Is Ready rattles along well too. State Of Mind is different though with has a real inventiveness, where almost jangly sections hang appealingly in the air until some fuzz guitar pyrotechnics barrel in.

Woman Cry is a fair shot at rolling reggae pop even if the backing vocals are a bit embarrassing. Then comes Lipstick, from the Minder episode. It is structured around a rhythm much like the “Gloria” garage staple and comes with all the upfront attitude you would expect from Ms Quatro. The catchy and moody rocker Hard Headed saw release in Japan as a single and Ego In The Night matches a breezy sound to a pointed lyric well enough.

Lonely Is The Hardest is a sorrowful rock ballad which is pretty average, but Rock Hard rallies with its final two tracks. The punchy new wave of Lay Me Down feels authentic and Wish Upon Me glides from grungy guitar buzz to pure pop impact with real style. A consistent listenable record with a scrappy charm that is near impossible to deny, Rock Hard warranted more success than it actually got. The sole extra attached to this disc is Suzi’s excellent and risqué version of The Normal’s Warm Leatherette, which makes the disc even more attractive.

It was over two years before the next Suzi Quatro album Main Attraction arrived towards the end of 1982. Chinn and Chapman were gone by this point, with Quatro, her husband and bandmate Len Tuckey and 1960s chart star Chris Andrews writing all the songs. The album was released by Polydor, as Dreamland had by this time collapsed. Single Heart Of Stone kicks the LP off, an acoustic lead romp with definite pop appeal even if the laidback sound was far away from the sassy Suzi we knew and loved. The 7 inch single version is appended to the end of this disc. A more uptempo Cheap Shot ups the ante somewhat and the headfirst rush of the speedy She Knows is satisfyingly raw.

The title track reverts to the acoustic pop style of Heart Of Stone and it consequently was issued on 45 as its follow up. It is listenable, but doesn’t do much to stand out and Andrews’ sleepy Two Miles Out Of Georgia is MOR country rock. Candy Girl’s electropop blankness that follows is a shock after that and although I can’t fault Quatro for moving with the times it feels a little laboured at times. Remote Control was also taken from the album from single release and this again employs synths and treated voices. I liked it, though I can sort of see why it didn’t make the charts. It certainly must have wrongfooted long-term Quatro fans and Fantasy In Stereo probably updates Suzi’s sound for the synth sound in a more seamless way.

Electronics dominate Transparent too and Main Attraction finishes with the guitar-led pop/rock of Oh Baby. This is a curious album, with the second side near forming half a synthpop album, whilst aside from She Knows and possibly Cheap Shot the first half is radio-friendly but not that memorable. The changing trends in UK music may well have been a factor in the record not charting anywhere, though the Heart Of Stone single did make a minor impact in the UK. In truth Main Attraction is a bit of a half measure, with some good stuff balanced by the average.

Despite this setback Suzi and her band got to work on a follow up in 1983. Ultimately it wasn’t issued until 1998 with the punning title of Unreleased Emotion. This makes up the final disc of this set, along with the three singles that crept out from 1984 to 1986. Pardon Me, a simple but effective piece that harks back to the dawn of rock & roll, is the first effort here. This audio look back at the early stages of teenage rebellion continues on There She Goes, with Can I Be Your Girl being more of a ballad. It doesn’t disrupt the album’s flow, but to tell the truth isn’t that anything special.

The rougher sound of I’m A Rocker, built around meaty guitar work, is something of an improvement though and Strange Encounters constructs a pretty cool if tense atmosphere. Comes The Night returns to the clipped r&r influence of the first couple of tunes on Unreleased Emotion, with the slow and sleepy Starry Night homing in on a similar feel. It’s nice enough, if not really that memorable. A Status Quo-like boogie rocker Good Girl (Looking For A Bad Time) follows and Everything I Ever Wanted’s choppy guitar endows it with a good energy. The LP peters out after this and ends with its sole cover version, a short burst of Ronnie Hawkins’ Susie Q retitled Suzi Q. Unreleased Emotion does have the consistency that was lacking on Main Attraction, but the better tracks on the latter outstrip what’s on this third platter.

Finally we have the singles released after the album had been completed. I Go Wild marked Quatro’s return to RAK in 1984, but sadly didn’t recapture the success of the glam 1970s. It’s a mid-paced synthpop thing that may have been originally meant for Kim Wilde, which should give you an idea of what it sounds like. We then get two takes of chilly electro slowie Tonight I Could Fall In Love which came out on RAK a year later. Both of these singles for the company are ok, but come across as not quite strong enough to make an impact as 45s. The final three tracks are from a single made with The Troggs’ Reg Presley in 1986, with that band’s big hit Wild Thing receiving a duff 80s and near-unlistenable update in short and extended forms. It’s a shame as the pair could have been great fun on a raw and rocking cut. The single’s b side I Don’t Want You brings The Albums 1980-86 to its end.

Suzi Quatro has since gone onto a successful career as a DJ, but still writes and records to this day. As regards The Albums 1980-86 Rock Hard is head and shoulders above the other two collections, a highly enjoyable record that is a real keeper. It also proved Suzi still had a lot to give after glam had gone south. Main Attraction is more of a diverting hotchpotch and the good stuff on it is very good. The singles appended to the end of the last disc are probably best forgotten, but I suppose completists will be interested. To be fair Unreleased Emotion itself is listenable, even if the muted rock & roll format employed never gave Suzi the chance to really cut loose. While not capturing Suzi Quatro at the height of her fame, she’s in feisty form throughout this set. Her energy and charm provide the focus for what is a good collection from her post-glam years.