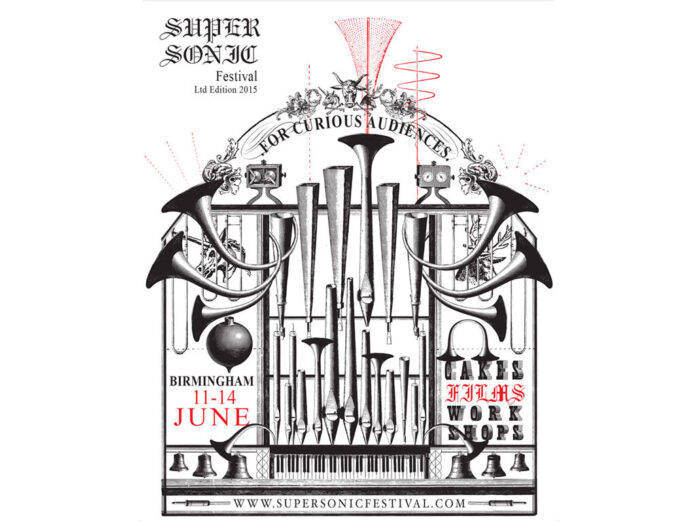 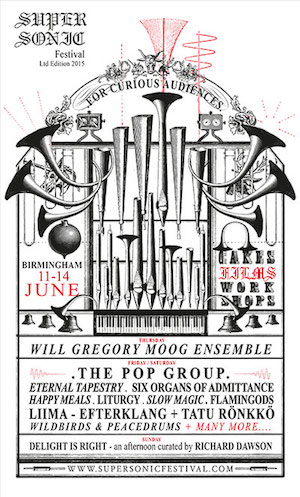 Supersonic Festival will be returning to Birmingham this June. It’ll be the twelfth edition of  the adventurous music and arts and the initial line up has just been announced. Read on for full details and links to snaffle those rare early bird tickets!

Since 2003 Capsule has brought to Birmingham one of the countries favourite   experimental music and arts festivals, one which has genre-bending sound and performance at its heart. So popular is the festival, in fact, that last time around it sold out in record time – quite an achievement in what are straightened times for festival organisers!

This year’s lineup looks just as unmissable as previous ones. Its first announcement is headlined by a performance by the Will Gregory Moog Ensemble. Will Gregory, one half of Goldfrapp, will be joined by a stellar line-up of 10 musicians including Portishead’s Adrian Utley and composer Graham Fitkin. They’ll be performing works by Bach, John Carpenter, Burt Bacharach and Oliver Messiaen on a fascinating array of vintage instruments, but it’s expected these will all be overshadowed by a new piece by Will Gregory which features a “clocking device” specially built for the ensemble that enables all 10 synths to be synced, producing music previously impossible to perform live.

Post punk provocateurs and Louder Than War favourites The Pop Group will be bringing their pioneering throb to Supersonic in 2015 too. With a brilliant new album out (review to appear here soon) this’ll undoubtedly be a highlight for many attending.

Also on the bill will be Six Organs Of Admittance who’ll will be performing, dissecting and demonstrating The Hexadic System – the name of his new album for Drag City.

The mighty Thrill Jockey will be present in the form of Portland’s psych rock explorers Eternal Tapestry and black metal lone wolves Liturgy, who will be showcasing their detailed dissections of cross-fertilising hardstyle beats and occult-orientated rap present on their soon-to-be-released and excellent LP, The Ark Work.

Glasgow’s Happy Meals, will be bringing their sophisticated Franco-Scottish hedonism to the festival, while super-kinetic London future jazz outfit Tomaga, the anonymous sundrenched sounds of Slow Magic, and Swedish maxi-experimentalist duo Wildbirds & Peacedrums shall all also be in attendance.

Flamingods will also be bringing their African rhythms, repetitive grooves and a pleasure-seeking sensibility to lead the Supersonic Kids Gig – Big Sounds For Little People, a special show for the under 7’s.

On Sunday 14th June, Richard Dawson, an absolute Louder Than War fave after his lofty placing in out album of the year list 2014, will be curating an afternoon of performance, named after his infamous podcast Delight Is Right. The programme will play host to a number of very rare live UK performances by artists handpicked by Dawson, those whom he holds dear and sites as an influence on his own songwriting and will end by a performance by the man himself, entertaining the audience with songs that are both chucklesome and tragic, rooted in a febrile imagination.

Ever looking forward, Supersonic is re-imagining its format this year. The 2015 edition will be relocating to ‘The Crossing’ in Digbeth which is a brand new venue and one of Birmingham’s hidden gems with state of the art sound, lighting and a/v gear specifically designed for live amplified music.

The second stage is located a minutes walk away in Boxxed, a post industrial warehouse space where the festival has taken place in previous years. These spaces will play host to live performances, a market place, talks, workshops and the famous Supersonic Tea Room full of epicurean delights.

You can expect PLENTY more from the festival in the way of dance and debate, participation and observation, as well as more acts to be announced in the coming months, we’re promised.

A Kickstarter campaign has been launched to offer unique treats to those who wish to purchase these advance tickets. More details here.