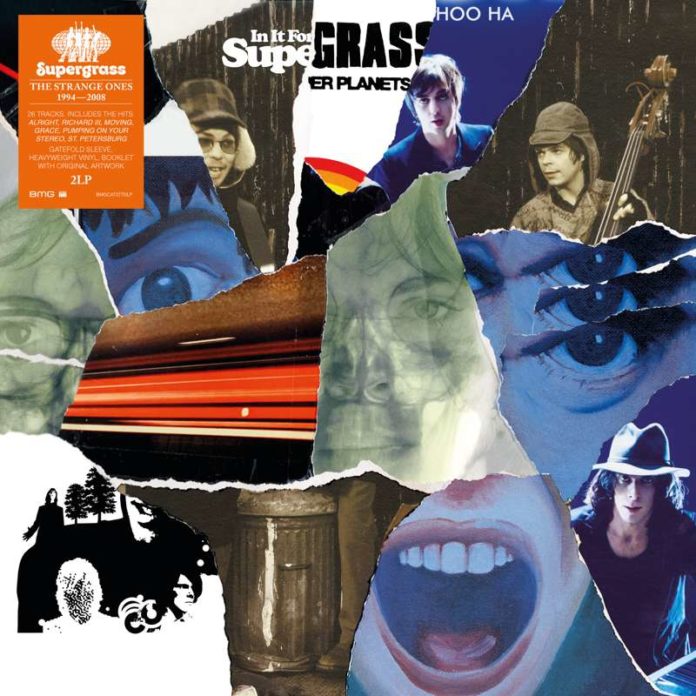 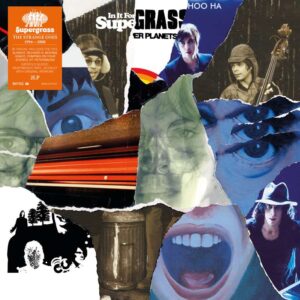 The Britpop stars get a deluxe re-edition treatment and singles collection to mark 25 years since the release of their debut album.

Around the tail end of 1994, just as Britpop was in full swing and charging headlong into its peak year, Supergrass launched themselves into the fray with a riled up pop-punk scorcher, lighting the fuse that would soon after see them explode. Caught By The Fuzz, originally released by Backbeat Records, summed up exactly what it felt like to be a teenager, pulsing with a wound-up energy and ready to go off at any moment. Of course, it would make the perfect opener to any Supergrass retrospective, but this new retrospective sees the band rewinding through the years and so, on the double vinyl and CD versions, the song closes out the album: a reminder, after hearing where they ended up, of exactly where they had come from. Youth bound in naivety and full of drive.

And where they ended, as the band split ten years ago, was itself a step back in history from the punkier spirit that drenched their first releases as they released their final album, the gloriously glam-inflected Diamond Hoo Ha. The band’s final single, Rebel In You, saw singer Gaz Coombes channeling his best Bowie spirit in the studio where Bowie himself recorded his Berlin trilogy. Sadly, by that point, their label had lost interest and simply refused to release it. Telling then that the artwork saw them flicking the Vs back at them – a truly deserved sentiment for a track that still stomps with full-on pop-rock as the band continued to age and evolve with grace.

In their fifteen years, Supergrass produced some of the most infectious tunes of the era. Through their first four albums, they drew in and built on the greats of British rock. I Should Coco was a wonderfully eclectic debut for a band still in their teens, pulling in punk, garage, psychedelia and music hall, and wrapping it all up in the Britpop bow. With a wink and a grin, the Oxford trio placed themselves as much next to Blur as The Buzzcocks. They brimmed with a buzz that, over the following seven years, would see them hone their style for each of their subsequent albums. By the time they released their fourth album, Life On Other Planets, they had developed their style into a funky powerpop blend that stomped throughout, moving continuously and never going stale. It was seen as a return to form after what was considered by some to be their half-baked self-titled third album, albeit one that still provided the era with one of Britpop’s best songs in Pumping On Your Stereo.

For those who had followed the band to that point, Road To Rouen came as an unexpected shot, a maturing in sound that saw the band delve more into their acoustic guitars and later-Beatles influence. While some reviewers balked at the idea of the trio growing up, the album actually produced some of their best, although more plaintive, songs. On this compilation, it’s a shame that the band have eschewed the inclusion of Low C and strong album tracks like Za from Life On Other Planets, to make space for more of a focus on their early highlights.

Of course, spreading their fifteen years of recordings over one CD or two LPs is going to leave holes, but the collection shows in spades the quality that the band had, and still have as they make their return. And of course, for completists, that’s where the sprawling 217 track boxset comes in. For those wanting the b-sides, the demos, a plethora of live recordings, that’s where it is, and in droves. The early live recordings of songs like Lenny stamp indelibly exactly what drew people to them as they spit with confidence. There are also a couple of great new remixes in there, especially Danny Goffey’s reworking of Caught By The Fuzz. And in amongst all the hits, the full albums, lies the beautiful unreleased Bury My Heart.

Through the peak years of Britpop, Supergrass burned bright and produced some of the era’s best-known songs. Over fifteen years, their six albums showed us what could be produced as their fervour and youthful energy collided with a music scene on the ascendant. As the bands around them bloated, cracked and peeled away, they persevered and, to their credit, continued to evolve within their own confines until musical differences got the better of them at the turn of the last decade. It’s great to see them returning and there’s hope for new material, but for now we can drop back into those heady days of old and know that it’s all alright.