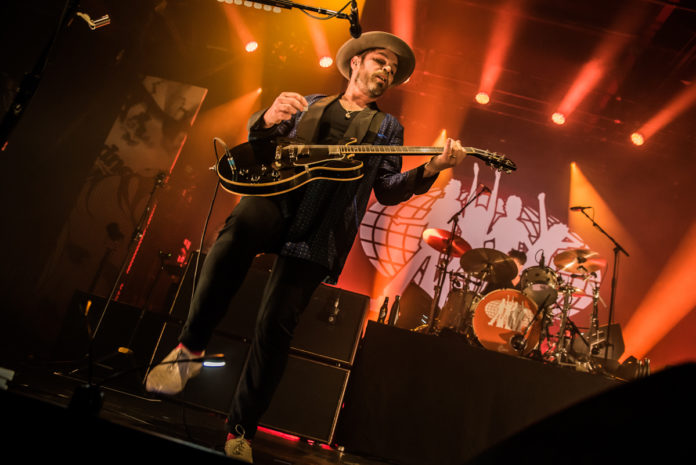 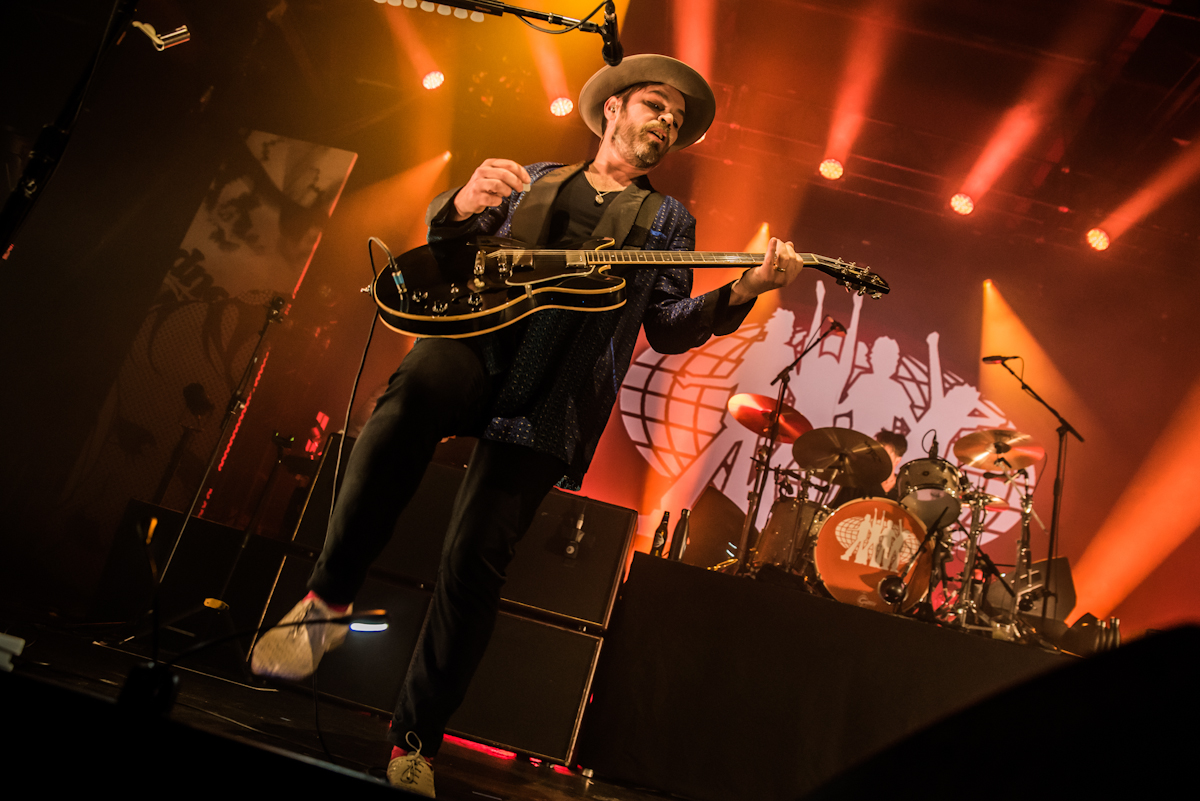 Andy Brown heads into a windswept Leeds city centre to catch the mighty Supergrass at the O2 Academy as part of their much anticipated Strange Ones tour. Oxford’s finest are touring the UK after reforming a full 10 years after they went their separate ways.

It’s crazy to think that Supergrass released their exuberant debut LP, I Should Coco, over 24 years ago. Surely these plucky young troubadours were incapable of ageing? The band, of course, went on to release 6 superb albums and a veritable treasure trove of hit singles. It was a genuinely sad day when they called it quits. Thankfully, 2020 see’s the ‘Grass back on the road.

Tonight’s support comes from Loup Garoux. Turns out that they aren’t a band of French werewolves after all but a sort of supergroup formed from members of Gorillaz, The Feeling and Ed Harcourt’s band. The trio play dark and satisfyingly heavy rock designed to hit you square in the chest. There are some distinctly gothic undertones going on here while the songs take some unexpectedly epic left-turns. The rather gorgeous Better Than Heaven is infused with the kind of anthemic melancholy that’s hard to resist.

The lights go down and Supergrass take to the stage, the spooky organ drone of In It For the Money sending a shiver of excitement through the room. The song explodes, hands are held aloft and hairs bristle on the backs of necks as that familiar chant echoes through the venue. The giddy clatter of I’d Like to Know follows hot on its heels and I’m beaming from ear-to-ear. I’m not the only one either.

A suitably energetic Mansize Rooster comes next followed closely by the dark, irresistible groove of Mary. A lot of time has passed since these songs were first aired but the band sound as fresh as ever. The audience try to keep up as bassist Mick Quinn effortlessly hits all those impossibly high high-notes. Rob Coombs provides those distinctive organ flourishes as Danny Goffey piles into his drumkit with typically inexhaustible enthusiasm. Gaz remains a commanding guitarist and frontman; a rock ‘n’ roll singer in a rock ‘n’ roll band.

Moving brings one of the nights first big sing-alongs while the beautiful, bar-room swoon of Time finds strangers serenading each other. I thought I’d enjoy tonight’s show but I wasn’t quite prepared for just how emotional it was going to be, straining my voice as I howl along to every song. Sitting Up Straight and Going Out nearly take the roof off while the gorgeous, lovelorn lethargy of Late in the Day successfully pulls on the heartstrings.

Coombs asks us if we want to go “mental” before ripping into a suitably riotous Richard III. The crowd, as you’d expect, respond appropriately. It’s not every Saturday night that you get to jump around like a madman while dressed in a heavy winter coat. The graceful, acoustic strum of Low C providing some teary-eyed respite in the sweaty aftermath. The hits keep coming with the manic riff-o-rama of Lose it, the perfect pop of Grace and the iconic, carefree bounce of Alright.

“Living is easy” sings Coombs on the beatific rush of Sun Hits the Sky, “with time on my side”. The bands eternally youthful ethos encompassed in one lyric. A frazzled Caught by the Fuzz, a fantastically ragged Strange Ones and a thoroughly triumphant Pumping on Your Stereo make up a rather satisfying encore before it’s time to go. Tonight’s performance has felt like a well-deserved celebration for both band and audience alike. I’m one sweaty and extremely happy customer. Good to have you back guys.

All words by Andy Brown, you can view his author profile here.

Photo by Michael Bond. More work by Michael can find on Facebook and Twitter. His photography portfolio can be found here.