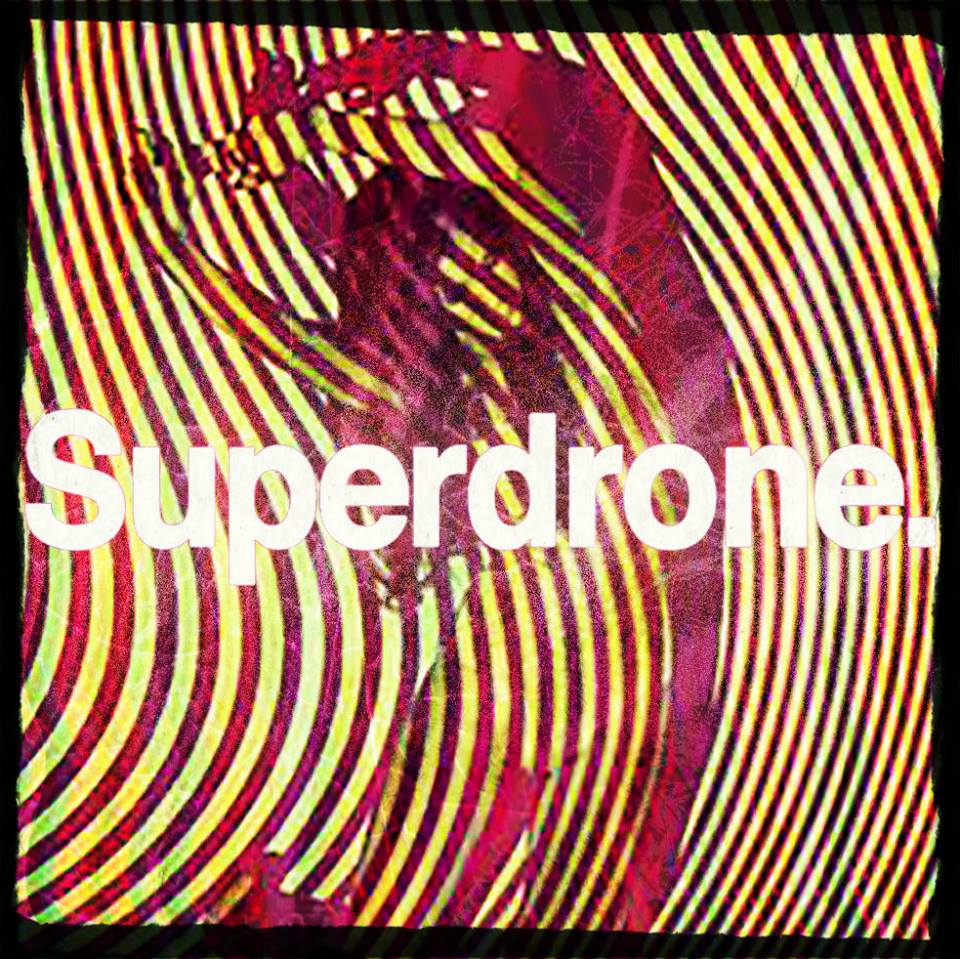 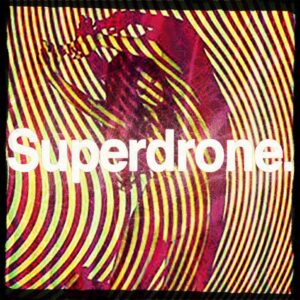 “You can’t only hear the music,you can also taste it, and it tastes like black, white and red ice cream”  Say Superdrone. ‘Yeah Maan’, says Ged Babey as he trips the ‘Drone fantastic.

I love a band who do my job for me.

Hailing from the south of England the 60’s-80’s psych drone trio formed in 2015 with the aim to space people out using a set of complex sonic waveforms. The songs are scientifically altered and structured to make you feel as though you are on some kind of groovy experimental medication giving a live experience like no other band you have ever or will ever see – ever. The band is made up of 50% of the 2003 electronica duo Lien (and more recently Dahlia FX) joined with former Superfuzz duo creating Superdrone. A new strain of alternative/drone psych that has got people talking from all the 5 corners of the universe.

Some people have stated that you cant only hear the music but you can also taste it, and it tastes like black, white and red ice cream.

Under ‘Genre’ I notice they refer to themselves as ‘Stargaze’ as opposed to Shoegaze, which I like a lot.  A really, really important distinction. Some bands look at their footwear, others gaze at the wonders of the cosmos and let that inspire them.  Talking of which, the standard ‘Influences’ question is answered with “The Beatles Psyche Shit” as well as usual suspects, Spacemen 3 and “Early” Verve.

It was John Robb who picked Superdrone as one of Louder Than Wars ‘Ones To Watch in 2017‘, not me.  I passed the album on to him, but omitted to tell him they were from my neck of the woods rather than the North. They do have more of a Northern sound than Southern restraint.  somehow.

I am a bit of a fair-weather psych fan. There is a hell of a lot of music around which falls under the umbrella term and it can range from the most self-indulgent, formless cak to the most transcendentally beautiful music.  Superdrone, to me, are psychedelic with rock’n’roll attitude and a bit of gristle and bone as well as fleshy guitar and ethereal chemitrails. They are also eminently accessible. Dare I say it…’pop’, but in a dark, narcotic way. Like The Jesus & Mary Chain. Which they do. One of the stand-out tracks on this really rather luscious and gorgeous album is called ‘Crazy’. Minus points for unimaginative title-ing, but a beautiful, languid, Spector/Mary Chain/Psych journey into the erotic heart of a relationship.  It’s the slowest, most commercial track on the album and unlike the others and, on my planet, a hit single for the fucked-up and in-love. It could almost be a Phil Spector Girl Group 45 being played at 33 and a third. Check it out.The album as a whole has Tien Rens trademark sonic beauty; part Stone Roses in Zero Gravity, part Mary Chain gone inter-galactic…. and a million other influences.   Ed’s vocals are semi-submerged and blissed-out (whatever that means, but it sounds good).  The lyrical content is oblique and somehow unimportant as it’s the all important feel and texture which makes this album so listenable.

‘One’ – another unexciting bit of entitling – is an album you need to hear from start to finish. And preferably whilst in-transit. It creates its own movement psychically but its enhanced whilst you are listening in-car, boat, train or ‘plane.  Or spaceship.

Knights of Tien is a great piece of Kraut-psych which sounds like Muse if they’d been more into Krautrock than Prog.

The real piece de resistance is a long dub-psych-kraut epic called Made of Suns which goes into really interesting territory.  It’s pleasingly disorientating, moving whilst standing still, drone, dub, guitar snow-storm is a thing of beauty. The soaring guitar makes me think of a flying pterodactyl looming into view before dodging laser-fire… but maybe that’s the cheese I ate before going to bed.

I could drone on and on, but the proof of the pudding is in the devouring of this psych-pop feast.  Not on vinyl sadly, as this is one album which would benefit from the format.

Superdrone may not be the most inspirational band name but this is an album that is well worth seeking out…it works as a lazy listen, when your concentration drifts and as a concerted sonic tonic.