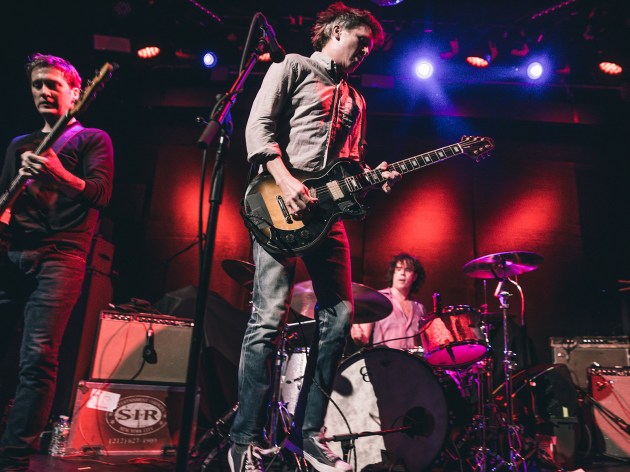 Riding off the back of one of their most politicised, and popular, records, the North Carolina legends make a celebratory return to England’s capital city, playing new cuts and a selection of scuzz-filled classics. Sam Lambeth reviews.

Of all the bands that you’d bet on devising the ultimate anti-Trump document, Chapel Hill royalty Superchunk would have been quite far down. However, ever since they returned to recording duties at the turn of the tennies, the blistering four-piece have found themselves in a creative purple patch – 2010’s Majesty Shredding and I Hate Music (2013) delivered joyful noise and heavy elegies, respectively. This year’s What A Time To Be Alive is no different, a ferocious compendium of puppyish punk serving as a state of the nation address.

Back in London after what seems like an eternity away, the bequiffed and boisterous Mac McCaughan wastes no time in tearing into their new album’s title track. From then on, the music does the talking, but what a loud voice it has – from the new LP, Reagan Youth has the vim and vigour of a band half their age, the kind of volatile melodies Husker Du blasted out back during Ronald’s reign. Break the Glass and Black Thread balance poignant melodies with McCaughan and guitarist Jim Wilbur’s needling riffs, while Bad Choices feels like a shaking of the head to those that ushered Trump into power.

Speaking of Husker Du, Bob Mould’s rhythm section – the peerless Jason Narducy on bass and manic drummer Jon Wurster – provide brutal anchorage to the band’s cruising rock. The sold-out crowd, a blend of American ex-pats and grungy office workers, greet the new songs like old friends, but it is the classics that really get them in a lather. Detroit Has A Skyline’s frenzied riffery remains as potent now as it did during its original release, as does the brutal Skip Steps 1 & 3 and the stately Driveway to Driveway.

The band’s fitting finale is Hyper Enough, a crunching blast that gives McCaughan plenty of room to show off his imitable yelp. “I think I’m hyper enough as it is,” he wails. He’s not wrong, but the crowd are taken on such a sugar rush – he’s not alone.

Superchunk are on Twitter. Their new album, What A Time To Be Alive, is out now.

Sam Lambeth is a Birmingham-based writer, journalist and musician. He is onTwitter, and you can read more of his work on his archive.