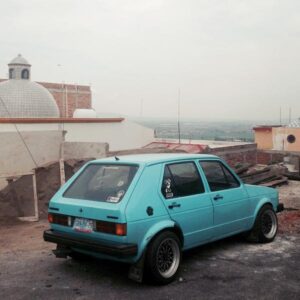 Originating in Milan, but now based in London, Super Paradise have just burst onto the garage scene in the UK with their debut album ‘Quencebo’.  Originally produced, written and recorded by lead singer and guitarist Francesco Roma in his hometown Milan, the record sees the collaboration of Nico Spreafico on backing vocals and now as guitarist in the live line-up. Since moving to the UK, they recruited keyboardist Juliet Styles and drummer Bradley Smith to the full line up.

‘The F.C.’ opens this eight track album with John Carpenter esque electronica which immediately got my ears pricked. The guitars and vocals come in over the top and it is completely enveloped by dreamy indie pop, yet the overlapping of guitars make for some nice noise! Some gorgeous chord changes and more noise after the second verse absolutely make this track.

‘Ties’ quickly follows with squealing feedback at the start. Lovely. This 1.41 of a belter has shouty phoned in vocals over a 100mph riff. Very Stroksey. Nice

‘Dawn’ is another shouty quick one that has a nice bass riff and harmonies. 2 minutes of garage rock joy. And as the LP progresses, they veer towards Guided by Voices experimentation/throw away with ‘Closet’, more great throbbing bass riffs and stabbing vocals with ‘Beirut’ and an inspired cover of LCD Soundsystem’s ‘All my friends’ that, replete with keyboards, sounds like Joy Division in it’s execution and is beautiful stuff actually! Just wonderful.

The penultimate title track is a noisy chugging affair, yet with nice chord changes reminiscent of early Spiritualised, and great use of feedback and screaming.

As a self produced, almost solo played album, Quencebo is an absolute triumph of garage rock, indie and noisy dream pop. Veering from one genre to another, yet keeping a nice thread throughout, Super Paradise are onto a winning formula here and hopefully their follow ups will match this. Download it now.

Super Paradise can be found via their Bandcamp.