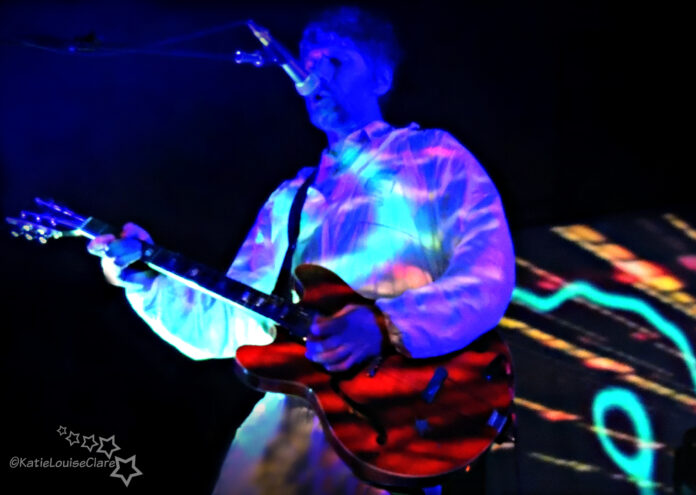 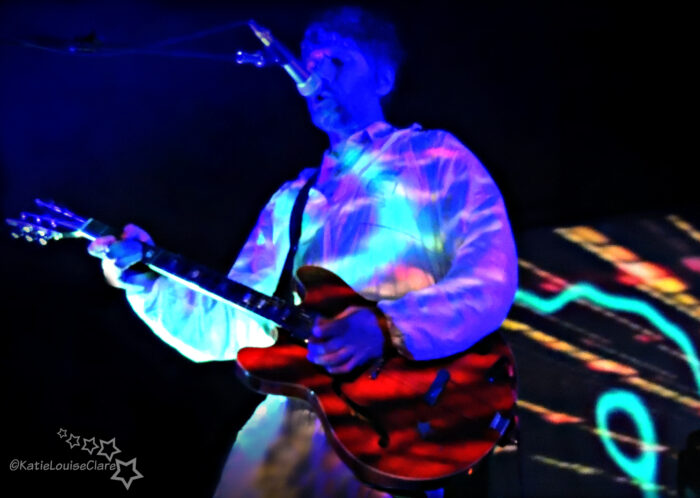 On the back of the deluxe reissue of Super Furry Animals classic fourth album Mwng (our review) the Super Furries have been out on tour. It took in Manchester’s Albert Hall on Thursday, from where Katie Clare reports back.

As the sun sets behind the huge stained glass windows of the Albert Hall, the newly expanded Super Furry Animal’s line-up walk onstage, in white boiler suits, backed by an intense light, laser and projected graphic’s show that throws luminescence, shadows and neon colours out, altering the features and movements of the band and creating quite a performance in itself, even before our senses can take in the music. 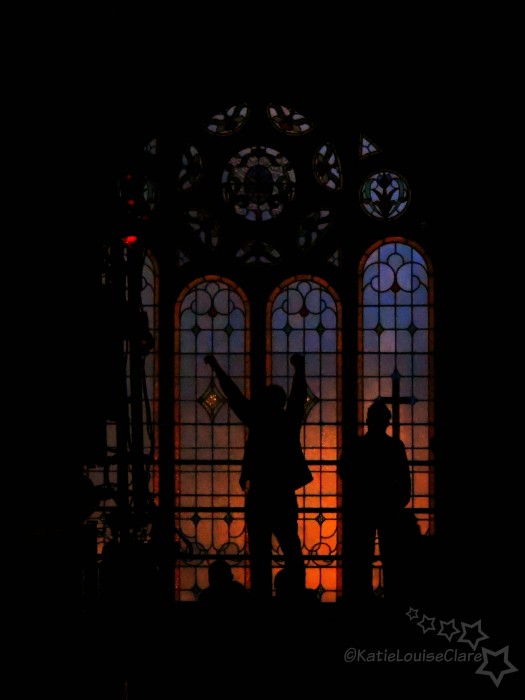 The six year hiatus has not dampened the tranquil momentum with which the band play together. In fact, there is something crisper and more eager about the innovative tracks that are held so dear by the band’s large and loyal fan base who get to enjoy every moment of a stunning twenty two song set. Opening with A Touch Sensitive and Drawing Rings Around The World, from their 2001 album of the same name, the avant-garde, colourful blend of psychedelic pop and electronica was at the time not the easiest to digest, however has aged well and works beautifully with the multi-coloured light show.

The band’s return is in support of the release of a 15th anniversary deluxe reissue of Mwng, the album originally released in 2000 on the band’s own Placid Casual label which has been long out-of-print and that was seen as a crowning moment in the band’s history and that’s still the biggest selling Welsh language album ever. The Super Furries distribute tracks from Mwng throughout the show, they are like so much of SFA’s catalogue; rousing, enlivening and passionate moments that hit the audience in momentous waves of emotional stirrings. Ymaelodi â’r Ymylon has everyone dancing, arms up high and everyone grinning as it’s melody undulated up and down. Dreamy swaying becomes the movement de jour as Y Gwyneb Iau slinks in, scrambles our brain and glides away. Gruff Rhys has quite probably never taken a day off from performing ever, yet his voice is as expressive, crystal clear and note perfect as ever-feeding the fire in everyone’s heart in whatever language he decides to woo / wow us with.

The blending of fan favourites through the night keeps everyone attentively transfixed: people’s personal darlings can be identified as the crowd cheers their approvals, the jumping becomes more prolific and the audience ‘choir’ ups their singing levels: Hello! Sunshine, Ice Hockey Hair, Receptacle For The Respectable and probably the most gratifying and bouncy rendition of Northern Lites ever makes for some pinnacle moments outside of Mwmg’s deliciousness. By the time we get the last song of the night, The Man Don’t Give a Fuck, there is something akin to chaos in the effervescent strength of its delivery: Go “APE SHIT!” says one of Gruff’s cue cards and Manchester’s gathered mass provide as requested.

There is much optimism that this re-emergence is the pre-cursor to not only the continuation of the Super Furry Animals performing together live, but also that there may in due course be new material: the band as a collective have always been delightfully creative, charmingly emotive and amusingly engaging: and we’ve really really missed them. Hir yn byw y Swper Anifeiliaid Blewog!