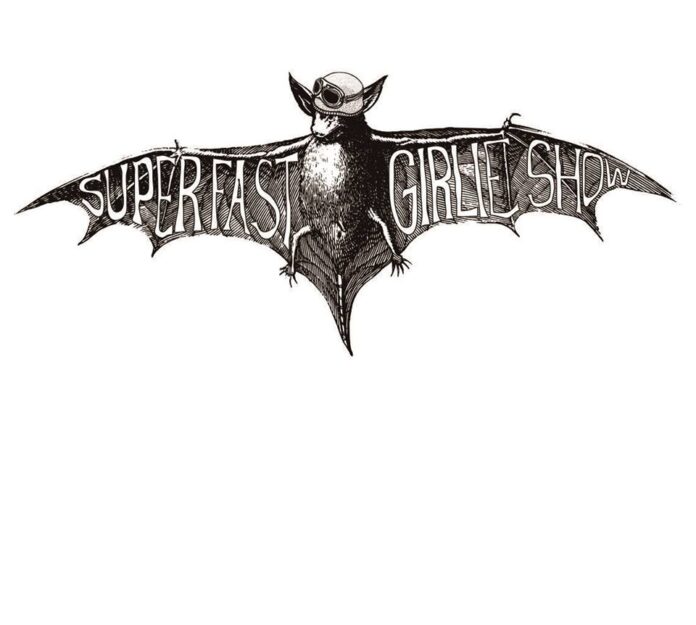 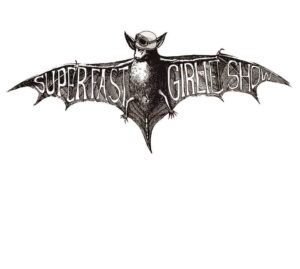 Rebellion 2015 was such an intense and surreal experience that it’s still sinking in. I knew beforehand that it was going to be impossible to see all the bands on my ‘must see’ list over the four days. I did pretty well, though, managing to see at least snippets of most sets. I certainly covered a few miles over the weekend between stages. While Evil Blizzard were hard to top after raising the bar on Thursday afternoon, I am very glad that I made the effort to see Super Fast Girlie Show’s performance on the Casbah stage.

This stage was set up in the underground car park; not ideal, but it had a reasonable sound and it clearly appealed to the smokers present, whatever they were smoking. I’m not too tolerant of standing in a smoke-filled fug anymore, but this was well worth the effort. SFGS (much easier!) had been recommended by a few people, and the size of the audience showed that they should move to a bigger stage next year. For most sets, people seemed to pop in and out of the Casbah; catching a glimpse and then scurrying out. To be honest, I did the same myself, as few bands playing there kept my attention. These fellas, however, have made the “two bassists, one drummer, no guitar” approach very entertaining from the outset. Handing out plastic kazoos to the crowd for a run through of a circus theme, they quickly hammered out their short, tight songs with no time to breathe in between. They have a certain charm, as well; taking the tunes seriously, but not themselves. 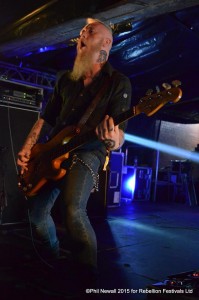 So, as I’d missed their merch stall, once back home, I duly ordered their debut album. Available on Anti Pop Records via the Louder Than War online shop (Buy), I wasn’t disappointed, even though the live experience is more satisfying overall. ‘Don’t Go Down Gentle’ has stayed on in my car since I got it, and now I’ve finally brought it indoors to listen to on a decent stereo and headphones (I like my neighbours).  Even better; I can hear the two basses clearly. Pasha’s bass lines seem to carry the main melody, while Phil’s have a more bludgeoning, fuzzy effect and the two share vocals.

‘1980’s’ is a hefty opening track and Al’s drumming is tight and spare, as needed here. This is sort of what I’d wanted QOTSA to sound like. Then I’d like them more. However, it’s ‘Mind Control’ that’s the first real ear worm; once it’s finished, I put it back on again. Sort of like The Cramps, if they’d had two basses instead of two guitars. ‘Freaks’ is another short blow to the head; the tunes really do come and go in a super fast fashion. You can even dance to it. My kind of drum and bass. 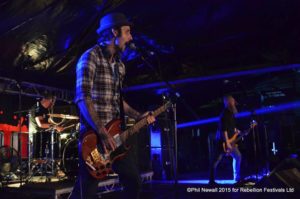 ‘Stand Up’ gets the head nodding straight away; they know their riffs, alright. ‘Leave It’ is simple but very effective. Why overcomplicate it? ‘I Don’t Care’ was a live highlight, as I recall, with Sabbath-heavy intro before leaping into a high speed tune. That’s what I like; they don’t forget the tunes.

You could argue that the songs are similar; ‘Oh Well’ does the same as some previous songs, but some bands thrive on honing their sound, while others work because they have to continue to change and adapt. Super Fast Girlie Show are definitely the former, but don’t be fooled into thinking that this is the easy option. ‘Stones’ passes by in a blink, it seems, and ‘Roller Derby (Stole My Baby)’ is kind of self-explanatory, lyrically.

If there’s a weak spot, it’s ‘Seen Enough’; it’s not bad as such, but the songs either side of it are better. Not that you could accuse it of overstaying its welcome.

The final two tracks of ‘Doley Boy’ and ‘Pub Fight’ are an effective ending; strong, hard and melodic. Plenty of punch, lean and focussed. 12 songs in 23 minutes and very little to criticise. Right, I’m putting ‘Mind Control’ on again. This track can be found on Spotify on ‘Punkalicious Vol. 6’ to whet your appetite. If you like it, you’ll love this debut album. Go catch them live.