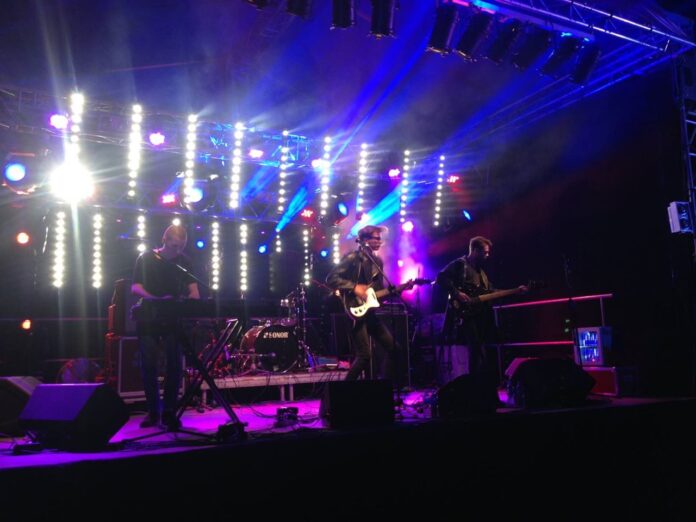 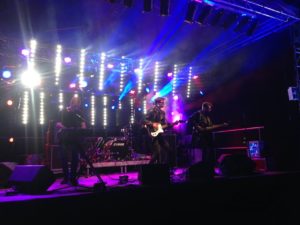 Just as you start to despair because you haven’t heard a great new band for some time they come at you in a flood. I’m in Lithuania for the Vilnius Music Week and my mission is to find ‘new stuff’ and this band have just got on stage in one of those crumbling Euro factories turned into a venue and are instantly compelling with their drum machine driven, lead bass, dark, almost Joy Division cold wave rushes that are embedded with the best of post punk.

Super Besse are thrilling and intriguing and they are named after a French town in the Tour Dec France which is fantastically confusing as they are actually from Minsk which is the capital city of Belarus. In the UK we don’t know much about Belarus apart from the fact that it was once part of the Soviet thing and seems to be a bit of a strict place to live.

This hasn’t stopped Super Besse who are three skinny youths and that drum machine who have dug deep into music history to take inspiration from Factory Records and .. with their stripped down, bass driven, post punk of the early eighties and translate it through their own uncertain world of the modern times to create a thrilling and quite brilliant music that transcends its roots to create something utterly modern and brilliant.

The bass player sounds great. The king of instruments is sat at the front of the band’s sound and is clipped and tougher than their tracks on their Soundcloud suggests with the band sounding meaner and more powerful than some of their online demos which are great but live, wow!

The singer looks like a lather jackets, skinny jeaned Buddy Holly hanging out with our old mate Peter Hook and his gangling, charismatic, youthful presence is key to the band’s live show- he also has a great booming, crooning voice, a voice of the angels as they reflect the darkness back at the world. His voice also turns those great bass riffs into pop songs- pop songs for the post punk, dark hearts who feel the pain of the world.

This is what all those other pretenders to the post punk throne should sound like, this is the sound of the stark modern with that genuine melancholic of post punk when it dared to have a , dare we say, gothic twist and they come from Minsk where no-one, I repeat no-one was looking for a band like this. A band as good as this.