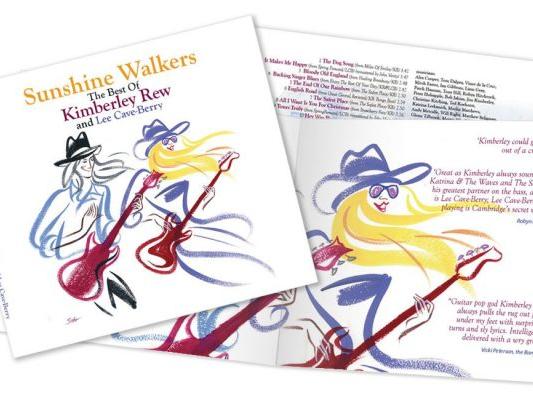 For years, when ‘Walking on Sunshine’ would strut its sparkly stuff in a bar, I’d turn to my fellow drinkers and say, “hear this song? The bloke who wrote that had a part in making a song called ‘Old Pervert’”.

A word of explanation to this sightly surreal opening is needed. Kimberley Rew, writer of that Katrina & the Waves monster hit, was the lead guitarist in one of my all time favourite acts, the Soft Boys, who, 40 years after they split up – ignored and mostly unloved for being too much of everything – are now lauded as a vital part of punk’s post 1977 fall out.

Like many I’ve known of Rew’s work almost without knowing it.  He also penned the Bangles’ ‘Going Down to Liverpool’ and the Waves’ UK Eurovision winner, ‘Love Shine a Light’. He also played at one of my favourite ever gigs when I least expected it; said gig being Robyn Hitchcock and friends (if memory serves, the Soft Boys and Ed Harcourt in Camberwell’s The Three Kings) playing the Beatles’ White Album from first to last. Rew, I remember, had an awful lot of illicit fun in letting rip when he could, shredding Harrison, Clapton and Lennon’s lead parts into tiny pieces.

This hopefully gives a picture of a man who has long toiled at rock’s coalface, often without credit.

Rew’s debut LP, ‘The Bible of Bop’, is an utterly classic record, and a remarkably generous and vigorous one, boasting as it does all his old Soft Boys mates and the American pop-rockers dB’s. Those who’ve never heard it will hear cuts such as the Underwater Moonlight-esque ‘Stomping All Over the World’, ‘Hey, War Pig’ and what I think was also a single from that era, the tremendously psyched ‘My Baby Does Her Hairdo Long’ (played with the dB’s I think) make it onto this extensive overview of his and his formidable creative partner, Lee Cave-Berry’s career.

Rew and Berry, it seems, have a collective and unnerving ability to turn their hand to any sort of musical style and make something very effective from them. In fact, if one thing could be said for this release is that, right from the “Beatles-do-Chuck Berry” opener, ‘The Dog Song’, you’ll get everything chucked at you; whether you like it or not. There’s a distinct feeling that the pair love nothing more than rifling through rock’s wardrobe to find a style that fits. ‘Flat Cat’ is a very acceptable rockabilly run out whilst ‘Happy Anniversary’ turns out to be a very affecting love song, infused with just the right amount of country sentiment. The gloriously laid back ‘Flower Superpower’ looks to Stax and Lord Eddie Hazel in equal measure. Then there are the rockers like It ‘Makes Me Happy’ and ‘Yours Truly’, which remake/remodel licks originally served up by the likes of Free and Badfinger. For its part, ‘Bloody Old England’ is the funniest Small Faces / Kinks pastiche I’ve heard; right down to that choppy Marriott/Dave Davies-style down strokes. Watch out for the kazoo bit, too; which makes you look uncomfortably over your shoulder for the ghost of Viv Stanshall. Elsewhere, Berry brings a wry pathos to the vox on the too-subtle-for-its-own-good ‘Backing Singer Blues’, and the aforementioned ‘Yours Truly’.

And of course, Rew’s guitar licks (which, if you know Rew’s work in the Soft Boys are always a hair’s breadth away from being totally unhinged) are always present; and as quicksilver an experience as putting your hand in a bucket of eels.

In summary: this exhaustive overview is loads of fun, and blessed with some essential cuts and some very enjoyable surprises.