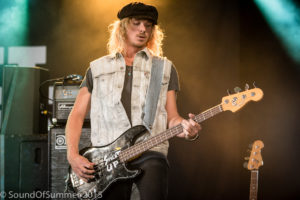 Sunset Sons are currently being hotly tipped for a hugely successful career.  They are mentioned in the same breath as Slaves, James Bay and Wolf Alice as the BBC’s sound of 2015.  Having caught glimpses of their set on Reading Festivals BBC Introducing stage last year Louder Than war’s Alan Ewart checked them out on the Festival Republic stage at this years festival and then caught up with the band for a chat afterwards.

The BBC introducing stage at Glastonbury and Reading festivals have unearthed a host of great new bands in recent years. Last year at Reading saw the like of Love Zombies, Jack Garrett and AllUsOnDrugs grace the stage but it was Sunset Sons that really captured my imagination.  Tipped as the sound of 2015 by the BBC I was pleased to see that they had made a huge step up by playing the Festival Republic stage this year.  I went along to check out their set and then grabbed a few minutes with the boys afterwards.

Sunset Sons were, in a way brought together by a mutual love of surfing and met in the small French surfing resort of Soorts-Hossegor, where Bournemouth born singer was funding his surfing by washing dishes and playing covers in a piano bar.

The foursome came together and honed their live sound playing to the snowboarding crowd over the winter in the French Alps.  As word began to spread their ensued a scramble to sign them.  Sunset Sons eventually signed with Polydor and are currently working on their debut album which was recorded in Nashville with Jacquire King.  This year has seen them play a host of festivals including the John Peel Stage at Glastonbury, Isle of Wight festival and T In The Park as well as Reading and Leeds.

Sunset Sons latest single made Radio 1’s record of the day list so it was no surprise to see a huge crowd awaiting their performance at Reading. The Festival Republic stage was rammed for their set with hundreds sitting in the late summer sunshine outside unable to secure a spot in the tent.  The crowd were most definitely not to be disappointed as Sunset Sons turned in a near flawless performance.  It was clear from opener, “Come Easy” from last years No Bad Days EP, that they were determined to grab this opportunity to win over another group of music fans. 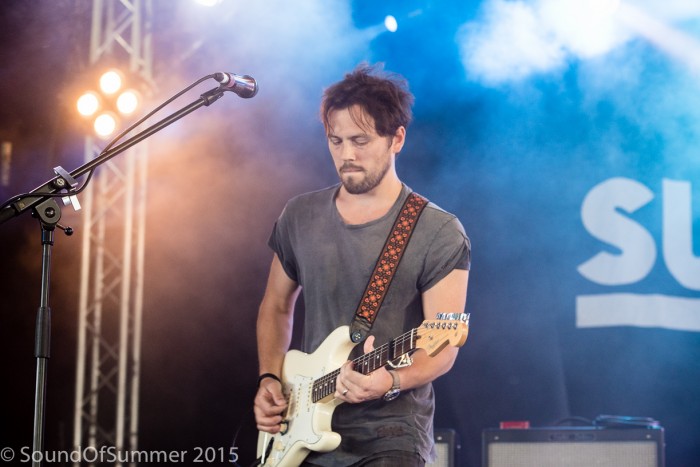 “Medicine” and “Blondie” from this years The Fall Line EP both got an airing as did current single “She Wants.”  As is invariably the case at festivals Sunset Sons set was over all too soon.  We were treated to a total of eight songs but I suspect the audience would have loved a much longer set.

It is difficult to categorise Sunset Sons.  They play rock music but with that kind of laid back vibe you expect from surfers. I can almost hear their songs being played around a late-night beach campfire. their tunes are melodic, catchy, well structured and above all enjoyable.  As is always the case, when you see a band enjoying themselves on stage then it is a surefire sign that you will enjoy it too.

When I caught up with the guys backstage a little later they were still buzzing from the gig, grinning from ear to ear and making absolutely no attempt to hide their delight at having enjoyed their set so much.  It is clear that Sunset Sons have developed an affection for Reading and Leeds festivals.  They told me that “it’s amazing, we have played about 25 festivals this year and the whole time we have been thinking ‘Reading and Leeds is at the end’.  It couldn’t have gone any better.  The crowd were really into it from the first few bars of Rob playing the guitar solo.”

“It was such a buzz hearing everyone singing our songs,  we saw from the first minute that everyone had their arms in the air and were singing along.  It was absolutely amazing.”

“At festivals like this there are so many great bands on.  You know people could be anywhere, so to have a full out tent to see you is a massive confidence boost but it is also very humbling.”

Sunset Sons expressed their gratitude to BBC introducing describing them as “like having your big brother standing behind you supporting you.  It’s good to know they are behind you and of course you get exposure to the right audience for your music.”

Sunset Sons told me that they should finish recording their album this month.  “We have some new songs that we are super excited about.  We want to release the best album that we can and working with Jacquire King is not an opportunity you are going to turn down.  Nashville was brilliant to us, the southern hospitality was incredible and we learned so much just by being there.” 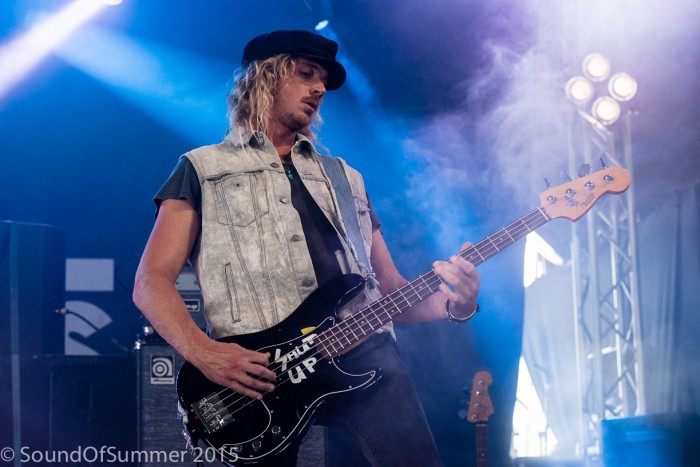 Sunset Sons will soon be taking to the road on their most important tour to date in support of Imagine Dragons.  As you might imagine they are really pumped to have won such a fantastic opportunity. They told me “there were lots of bands who wanted to win that slot and we managed to get on the list of bands that Imagine Dragons listened to.  They checked out about 15 bands and thought we would be a good fit for them.  We can’t wait.  It will be like playing 28 festival main stages.”

I had a great time both watching and talking to Sunset Sons.  They are a really nice bunch of guys who are ambitious and grounded.  They have a clear sense of who they are and what they want.  There is a very strong bond between them and they have outlets beyond their music.  Their is a sense of acceptance and gratitude for how far they have come in a short period of time.  They are ready for the next wave and when that big wave comes along, as it most surely will, they are ready to ride it for all it is worth.