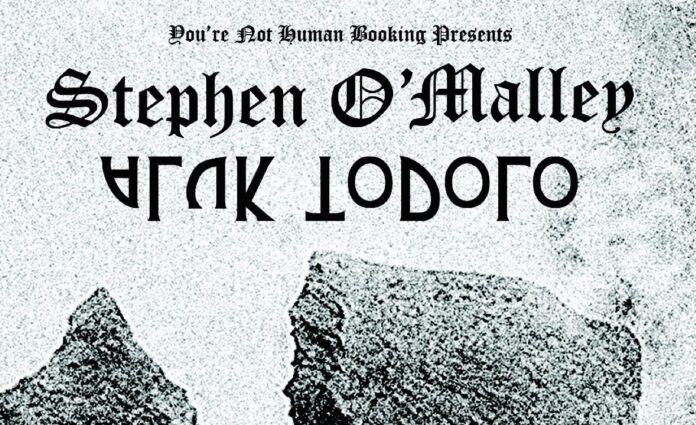 Stephen O’Malley  is a musician most famous for creating some of the best drone doom and experimental music music of the last few years. You probably know him as a member of drone metal titans Sunn O))) (read John’s review of last year’s Sunn O))) show @ Mcr) but he’s actually a fascinating solo artist to boot and it’s this iteration of his musical personality that’s headed UKwards from April 8th and onwards for six unmissable show. Read on for details.

As the building block around which Sunn O))) are founded Stephen O’Malley (aka SOMA) is a person generally revered not only by fans of drone metal, but  by his peers too. And for good reason. Seeing Stephen O’Malley on his own, therefore, should provide a unique insight into what goes together to form a tour de force like Sunn O))).

Having never seen Stephen in his own right I’m going to have to turn to the press release to try to give you some idea of what his live show will entail:

His solo material is inevitably familiar, expanding on the O))) principles, yet inexplicably different – revealing a more sculptural and angular direction. The extended solid and geometric aspects of the guitar and amplifiers, sound pressure, volume and temporal structure are ambiguous and solitary.

Joining Stephen O’Malley on the road will be instrumental power trio Aluk Todolo whose krautrock inflected, heavy and dark music has been chilling listeners to the core since 2004. We’re told they:

…reduce psychedelic improvisation to a bare, telluric instrumentation, in which dry, spare percussion grievously mines the scrapes, shrieks and shimmer of mutated guitar and bass. The band’s sound is monolithic and stabbing, hypnotic but unpredictable, minimalist yet teeming: a dangerous, noxious coil of all things black.

…and as such it’s to be assumed they’ll make the perfect foil for  Stephen O’Malley.

The tour dates are as follows:

To give you an idea of what to expect if you head off to any of these gigs below you can hear Stephen O’Malley live at DREAD exhibition opening, Haarlem, Netherlands 6 September 2013. You can also check out some Aluk Todolo at their Bandcamp.