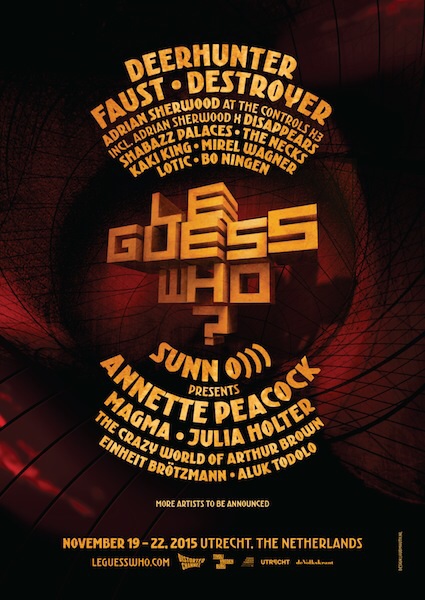 Le Guess Who? in Utrecht, The Netherlands, is proud to announce the first artists to perform at the 2015 event, which takes place November 19-22. This year’s festival will include a very special four-day program presented by heavyweights Sunn O))) that will showcase the band’s broad musical scope, alongside the main line-up of Le Guess Who?. Artists include Annette Peacock, Magma, Julia Holter, The Crazy World of Arthur Brown, Einheit Brötzmann and Aluk Todolo with more to be announced.

Ever since their 1998 inception, SUNN O))) have propelled the drone genre forward with a very diverse range of influences. The duo of Stephen O’Malley and Greg Anderson will showcase their similar, adventurous musical inclinations with a very special four-day program titled SUNN O))) presents at Le Guess Who? Festival 2015. The program will include a performance by the legendary Annette Peacock, who will return to The Netherlands for the first time in over twenty tears. Pioneering the realms of minimalism, free jazz, rap, classical music and psychedelic funk, Peacock marveled the likes of David Bowie, Brian Eno and one-time collaborator Salvador Dalí, and was one of the first jazz artists to record with a Moog after being gifted a prototype from Robert Moog himself.

Also performing as part of the program are progressive rock trailblazers Magma, inspired by the virtue and inventiveness of jazz legend John Coltrane and founded roughly 45 years ago by French drummer, pianist and composer Christian Vander; Julia Holter; The Crazy World of Arthur Brown, known from their ’68 hit Fire (the song that paved the way for the likes of Alice Cooper, King Diamond and Goat); Einheit Brötzmann, the collaboration between F.M. Einheit (Einstürzende Neubauten) and Caspar Brötzmann, French black metal experimentalists Aluk Todolo, as well as Sunn O)) themselves. More artists will be added soon.

This is in addition to Sunn O)))’s European summer shows. The full live listings can be found below: