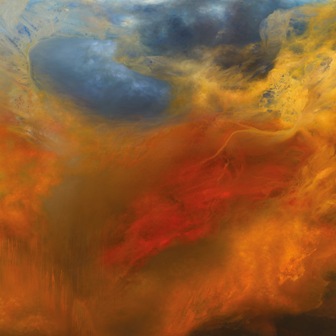 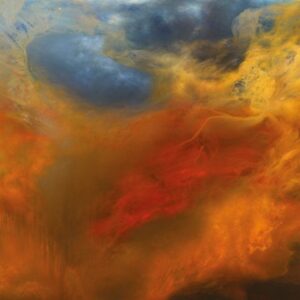 Sunn O))) return with their first album in four years with added Steve Albini. Conceived in the very building in which they were formed, Life Metal is the sound of a band refreshed and ready to shake your bones once more. Simon Tucker reviews.

The sad passing of Scott Walker earlier this year sent people dissecting and scanning through his most wonderfully eclectic back catalogue. In there laid an album that saw Walker marry his Drift head to the monolithic sounds of Sunn O))). That album was 2014’s Soused. Soused was everything you wanted from the collaboration as it was cinematic, terrifying, beautiful and witty. It was a strong contender for the best album either party involved had created and was easily one the best albums of that year (something our friends over at The Quietus agreed on). Now five years on from that album, Sunn O))) deliver not only an album that matches that career highlight but surpasses it.

Life Metal was first conceived in Downtown Rehearsal Los Angeles (the very building where the bands core members Stephen O’Malley and Greg Anderson formed) with the basic idea of forging new sounds and methods of recording without dismissing their imperious heritage. Aside from a basic concept the duo were also determined to record with yet another esteemed collaborator in the form of Steve Albini in his Electrical Audio Studio. Sunn O)) and Albini? I mean…come on. Before they got to Albini, O’Malley and Anderson further developed the sound and concepts with long time collaborator TOS Nieuwenhuizen on Moog…and then into the studio they went.

In a cosmic aligning of fate and timing, Life Metal begins with what now feels like a tribute to the fallen Scott Walker in the way it breathes into life, all dank and misty before the sounds of horses can be heard inviting you to mount up and hold on before we streak off into the darkness of opener “Between Sleipnir’s Breaths”. This brief moment displays the wit and cinematic skills the band have and allows you a quiet second to set yourself for what is about to occur as we are taken on a twelve minute odyssey through the deepest and darkest corners of what human beings call “guitar music”. As openers go  “Between Sleipnir’s Breaths” really feels like a statement. Its bed of drone and slabs of sound are familiar yet there is a newer lightness of touch and increased sense of song-writing dynamics at play here with the band and Albini discovering new forms of harmonics and melody appearing scattered throughout. “Between Sleipnir’s Breaths” contains an incantation performed by the acclaimed film music composer Hildur Guðnadóttir that adds a depth of deep rooted magik to the piece (Guðnadóttir would also perform electric cello and haldorophone on the album). A screaming and bold opener that touches the blackest of skies.

Life Metal goes on to continue its exploratory nature with “Troubled Air”. “Troubled Air” is where you get a fuller understanding of the bands knack for actual traditional song-writing hidden in a non-traditional format as you continue to get the notorious slabs of guitar but each slash and burn is paced to perfection with sections being held like verses and the appearance of a pipe organ, played by Anthony Pateras, birthing an unconventional chorus. Troubled Air is a beautiful piece that manages to flower a melancholy within the listener. It feels sad and yearning with the melodies, drone and feedback all creating a pristine representation of grief. With a more “meditative” album created from the same sessions as Life Metal due for release later this year, Troubled Air feels like a signpost of what that will sound and feel like.

It is at this point where we enter the deep centre of the album with “Aurora”. Eighteen minutes in length with not a second wasted, Aurora is where Sunn O))) force you into a mode of contemplation. It is piece that teases you down into a state of inward exploration thanks to its perfect construction. Human concerns are stripped away from you and you are faced with your own humanity. “Aurora” contains a thicker bottom end than the rest of the songs on Life Metal thanks in part to the work of long-time friend of the band Tim Midyett and his use of aluminum neck brass and baritone guitars. Whilst “Aurora” may be customarily long in length it never drags or falls into tepid repetition. In fact it is a song that is intoxicating and addictive with constant surprises and moments of lightness that make it an instant Sunn O))) classic and a piece you can return to again and again always discovering new and exciting sonic flourishes.

So we come to the end and as is their want, Sunn O))) do not go down gently saving their most ambitious song to the end. “Novae” is the sound of a band smashing boundaries and kicking down doors. Its twenty five minute length allows the band to open up all channels and allow the seething and twitching Ugly Spirit to have its wicked way. Just when you feel the pressure build to breaking point, “Novae” drops in temperature with the deep resonating tones of electric cello, performed by a returning Hildur Guðnadóttir, casting away all the crippling high frequencies and transforming the piece into a guttural, beautiful lament. It is within this section to we see the true heart of Sunn O))) as they tell us once again that they are not here to hurt us, more to open our eyes and hearts to new worlds and its languages. A truly arresting moment and whilst the piece returns to the brutality of its beginnings to end its journey, it is this middle section that will linger in the head and heart of the listener long after Life Metal has come to its end.

Life Metal is gorgeous. It is playful and destructive. Light of touch but heavy with intent. Life Metal is the sound of a refreshed band opening up new avenues for themselves and for their sound. Life Metal sings to the gods whilst getting cosy with demons. Life Metal is threatening yet inclusive and is a pitch perfect display of how a band can walk a tightrope of duality within their art. The collaboration ethos is community as revolution showing us that working together can lead us all into a more exciting world.